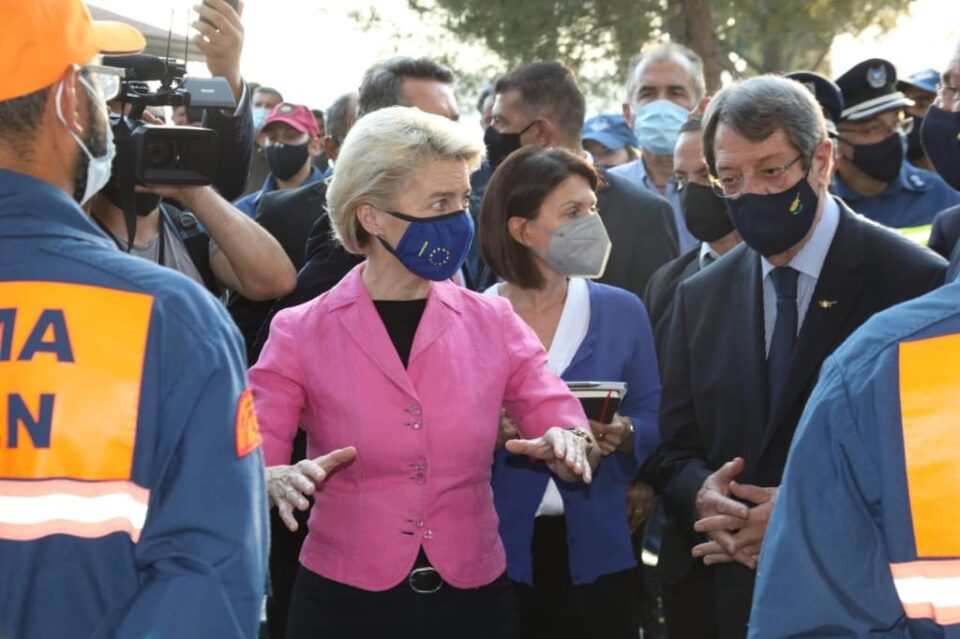 President of the European Commission Ursula von der Leyen on Wednesday said the EU stood with the people affected by last weekend’s fires, and announced that part of Cyprus’ National Recovery and Resilience Plan, allocates €18 m for equipment for fire fighters.

Von der Leyen arrived in the afternoon in Cyprus for a for a two-day visit to present the Commission’s approval of the Recovery and Resilience Plan for Cyprus to President Nicos Anastasiades.

Upon her arrival, she departed for Ora village, in the Larnaca district one of the communities afflicted by last weekend’s fires.

Escorted by Anastasiades, von der Leyen arrived at the cultural centre of Ora for a meeting with firefighters and members of the Disaster Response Special Unit (D.R.S.U) who participated in the operations against the disastrous fire of last week.

Ora’s community leader, Aristos Miltiadous, gave von der Leyen a symbolic gift: the key to a 150-year-old house that was destroyed by the fire.

The EC president said she was visiting the area with a “heavy heart” due to the death of four persons in the fire and the devastation of properties and the forest. She said she is full of respect for the fire fighters who worked day and night to contain the fire.

“And now that you have been able to contain these horrible fires and you have been able to contain this catastrophe it is also time to look forward with hope and confidence that you can restore the forest and build up again what you have lost and therefore let me say that your worries are our worries in the European family, your strength is our strength in the EU family and the solidarity that I see here in this community is complemented by our solidarity as the European family,” she added.

She also said that the Cyprus National Recovery and Resilience Plan, the approval of which will be announced on Thursday, allocates €18 m for equipment for fire fighters.

“Europe is by your side,” the EC president said.

Landed in Cyprus 🇨🇾 and my Belgian 🇧🇪 #EUCovidCertificate has been checked.

Get yours today for easier travel across Europe! pic.twitter.com/iwEUnGLx2U

Anastasiades said the European Commission president’s presence in Ora was “the tangible proof of the importance attached to the problems that the member states may be facing.”

Referring to the government’s decisions announced earlier in the day, aimed at supporting the affected communities, he gave reassurances that the state would do everything humanly possible so that the EU as well, through the Solidarity Fund, can come to Cyprus’ aid with specific assistance and programmes to revive the area.

He urged people to “have strength and courage.”

“What matters is determination, the will, to move forward. We will be by your side, you just put the determination and rest assured that we will relive the same beautiful moments that we lived in the past,” Anastasiades said.

He also thanked von der Leyen for meeting with the firefighters who, he said, “gave their best against the recent deadly wildfire.”

On Thursday von der Leyen is scheduled for a meeting with Anastasiades at the Presidential Palace.

They will then go to the University of Cyprus campus, where the ceremony for the presentation of the Commission’s approval of the Recovery and Resilience Plan for Cyprus will take place.

While at the university, there will be a public consultation with students, during which she and Anastasiades will respond to their questions.

Following her visit to the university von der Leyen will depart from Cyprus for Croatia.