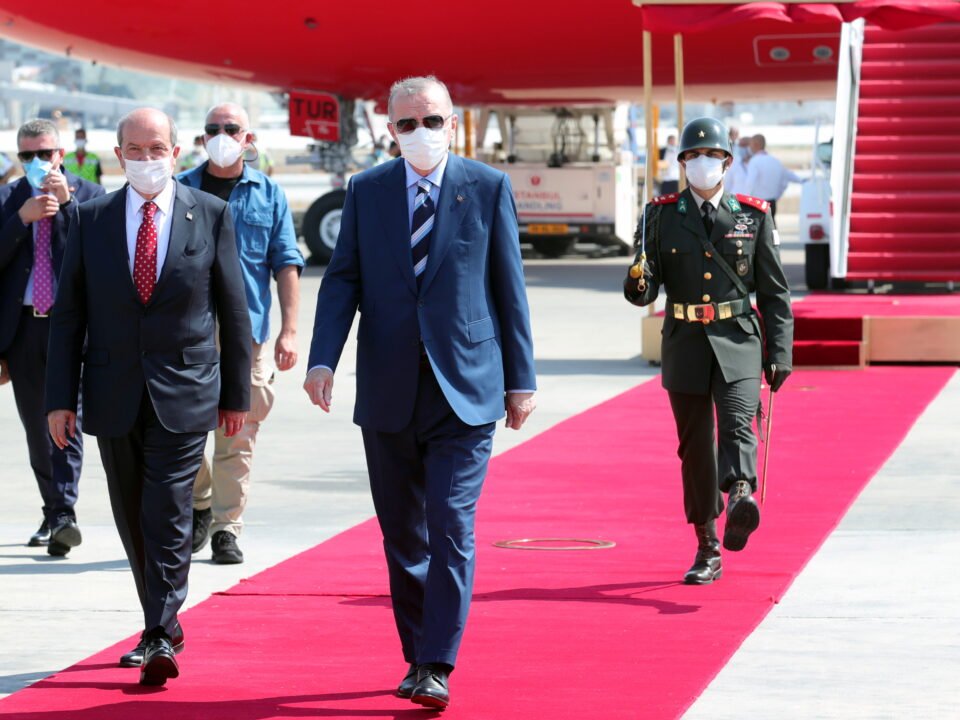 Erdogan and Tatar in Cyprus this week

Speaking in the north of Cyprus, Turkish President Tayyip Erdogan on Monday reiterated Ankara’s position for a two-states solution for the island.

“On this island there are two separate states and peoples…sooner or later the international community will accept this. We do not covet anyone’s land or rights,” Erdogan said, addressing the Turkish Cypriot ‘parliament’.

He made no mention of Varosha – the fenced off part of Famagusta.

The Turkish leader’s address to the ‘parliament’ began around 5.30 pm, about an hour and a half later than initially scheduled. He and a high-level delegation from Turkey arrived earlier in the day on the occasion of the events of July 20, 1974.

Calling the Cyprus problem a “major national issue”, Erdogan spoke of the “epic fight” of Turkish soldiers in 1974.

“Those who believe they can wipe out the Turkish Cypriots, based on the powers they depend on, found the iron-willed Turkish Cypriot people before them,” he said.

Commenting on the status of talks on the Cyprus issue, Erdogan noted that the Turkish side “would not wait another 50 years. The Turk keeps his word, but the Greek does not. It is not possible to believe them any longer, and lose another 50 years.”

“No matter how this climate of brotherhood [between Turkey and the north of Cyprus] has annoyed some in America, we shall walk this path decisively.” he added, in an apparent dig at the Biden administration.

“We know well who is the invader on the island … Eoka and those adhering to this mentality never regarded Turkish Cypriots as their equals. There is nothing that has not been discussed at the negotiations. The futile dreams of the Greek Cypriot side, who continue to see Turkish Cypriots as a minority, have brought about a deadlock.”

He said that Greek Cypriots were hiding behind UN resolutions and proposing the federation which it had rejected for years.

“The Greek Cypriot side continues to view itself as the sole owner of the island and the Turkish Cypriots as a minority and these empty dreams bring about the lack of a solution,” he said.

“The mentality which collapsed the Republic of Cyprus in 1963, rejected the Annan plan in 2004 and got up and left from the table in Crans Montana in 2017 has not changed at all, it is the same,” Erdogan said.

In his speech, Erdogan announced the construction of a new ‘presidential residence’ and ‘parliament’ building for the north, noting that “the Turkish Cypriot people do not have what they deserve.”

Speaking on Monday at an event in Kornos, Anastasiades said that the Republic will wait for the conclusion of the visit and proceed accordingly. He was referring to the widespread speculation ahead of Erdogan’s visit that he may announce some move regarding the opening up of a section of Varosha.

Erdogan had landed at Ercan (Tymbou) airport shortly after 3pm. He was officially received by Turkish Cypriot leader Ersin Tatar and other ‘government’ officials of the north.

A convoy of dozens of cars and buses escorted the Turkish president to the northern part of Nicosia. Sigma reported that Erdogan got on board one of the buses, as a gathered crowd waved Turkish flags and chanted slogans.

Sigma also reported that massive posters depicting Erdogan are draped over the building of the Turkish ’embassy’ in northern Nicosia. The building is situated across the Turkish Cypriot ‘parliament’, where Erdogan was later scheduled to speak.

Erdogan’s entourage reportedly includes Turkey’s army chief of staff, other senior military officials, the Youth and Sports minister, a number of Turkish MPs, and the three vice-presidents of the ruling AKP party.

Earlier, and speaking to media from Istanbul airport before boarding a plane, Erdogan spoke of Turkey’s position for a two-states solution in Cyprus.

“We do not accept the narrative of a [Turkish Cypriot] minority. No such issue exists,” he added.

According to the Turkish government, Erdogan is visiting the north on the occasion of the 47th anniversary of the events of July 20, 1974, which Ankara terms the “peacekeeping operation in Cyprus.”

On Tuesday, Erdogan is to attend a ceremony to inaugurate a mosque and a “people’s garden” in Varosha.

Before that, he’ll attend an inaugural ceremony for a new ‘presidential palace’ in Ayios Dhometios.

Breakdancers looking ahead to 2024 Olympic debut