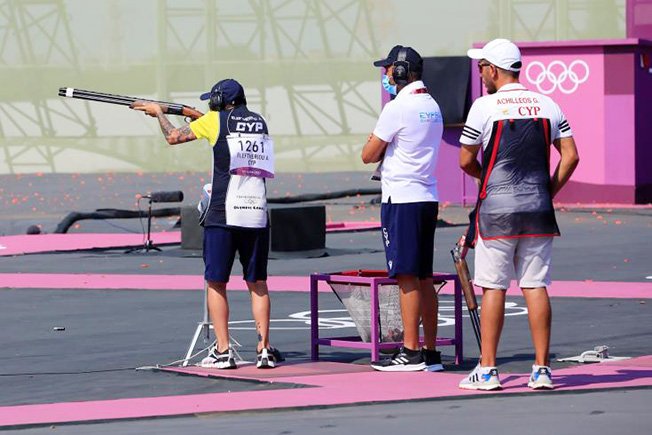 Cypriot shooters in action on Sunday

Cypriot shooters got underway at the Tokyo Olympics with some positive displays on Sunday.

In men’s skeet qualifying, Dimitris Constantinou and Giorgos Achilleos are in 12th and 14th positions respectively.

In the women’s competition, Andri Eleftheriou is in 12th place so far.

On Monday, there will be a second series of qualifiers before the finals take place.

At the end of the first day, two shooters scored a maximum 75/75 – the American gold medalist in Beijing and London, Vincent Hancock, and Frenchman Eric Delona.

Sunday’s action took place in unbearable weather conditions, with the shooters facing heat and humidity. The temperature was close to 35C, but with the intense humidity, it felt way over 40C.
Journalists covering the event were place in unshaded areas. However, the lack of wind helped the athletes, resulting in very high scores.

Tokyo 2020 is not using ordinary clay disks, but new, ecological ones. Made from a variety of recyclable materials, these discs are again orange so as not to confuse shooters, have the same diameter, the same weight and need the same pressure to break.