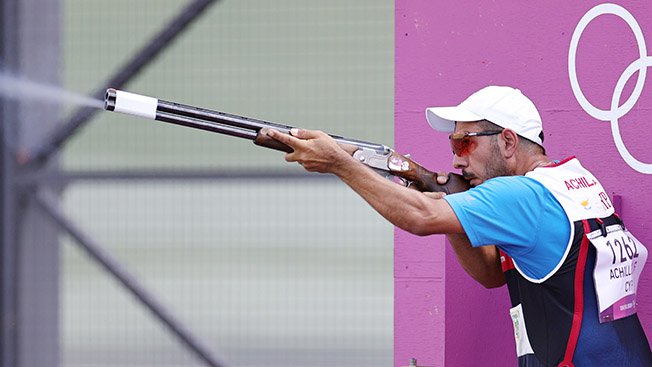 Cypriot skeet shooters performed admirably at the Tokyo Olympics on Monday but came up just short of qualification to the finals.

Andri Eleftheriou, Giorgos Achilleos and Dimitris Konstantinou all put in solid displays but narrowly missed out on progressing, demonstrating the tremendous challenge that the Olympics present.

Eleftheriou ended up in seventh place with a 119/125 score, missing qualification by a single position.

This is Eleftheriou’s best Olympic games performance to date, coinciding with also being designated as the Cypriot delegation’s flagbearer at the opening ceremony.

“I worked very hard for these games and I did quite well. However, we are at the Olympics and all of my fellow competitors also worked hard, which is why we saw such competitive scores”, Eleftheriou added.

Giorgos Achilleos had an incredible performance on day two, making the shoot-out phase for a spot in the finals, but missed during his fourth attempt.

Achilleos had previously recorded a score of 122/125 during qualifying and ended up in ninth place overall.

Achilleos’ immense efforts and the many variables not depending on his own performance took a heavy emotional toll, resulting in the shooter politely asking the Cypriot media attending the event if he could abstain from providing any commentary after his participation had ended.

Dimitris Konstantinou, who was competing in his first-ever Olympics, was a single shot away from making the shoot-out phase. His 121/125 score placed him in 12th position overall.

“My main goal was to make it to the final because I felt well-prepared for that when I came to Tokyo,” Konstantinou said.

“I’m disappointed that I did not achieve my goal, which I narrowly missed. I made some mistakes that were not an accurate reflection of what I can do and that cost me,” he added.

“I am a little sad, but at the same time I am satisfied because I competed in my first Olympic Games and there is nothing that comes close to such an experience “, Konstantinou concluded