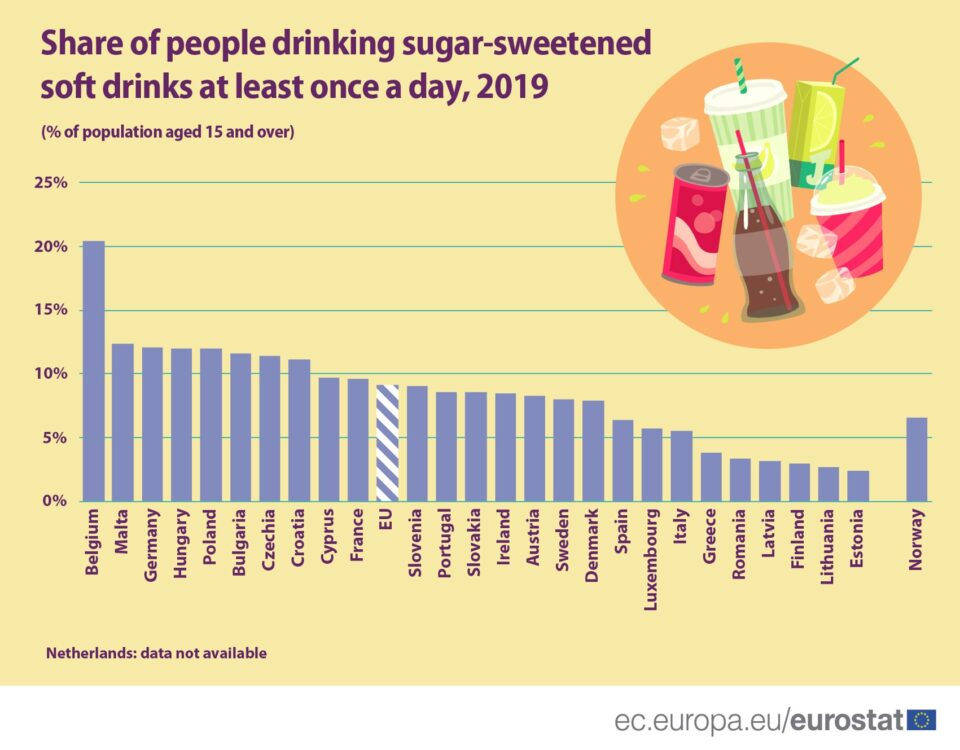 Almost ten per cent of people in Cyprus drink sugar-sweetened soft drinks at least once a day, ranking the country ninth in daily soft-drink consumption among 27 EU member states, a Eurostat report showed on Tuesday.

On average, nine per cent of people aged 15 and over in the European Union reported that they drank sugar-sweetened soft drinks at least once a day in 2019, while 6 per cent drank such beverages 4-6 times a week and 19 per cent drank these 1-3 times a week.

The highest share for daily consumption, 20 per cent, was reported in Belgium, followed by Malta, Germany, Hungary, Poland and Bulgaria with about 12 per cent.

Cyprus scored slightly higher than the EU average, with 9.7 per cent of the population saying they drink sugar-sweetened soft drinks at least once a day.

A total of 27.3 per cent one to three times per week, 10.1 per cent four to six times a week, and the rest 52.9 per cent of people in Cyprus said they occasionally or never drink soft drinks.

Meanwhile, the lowest share was recorded in Estonia with two per cent, followed by Lithuania, Finland, Latvia and Romania all four around 3 per cent.

According to Eurostat, daily consumption of sugar-sweetened soft drinks was more common for men (12 per cent) than for women (7 per cent).

The report also showed that the older the age group, the lower the frequency of consumption of these beverages. The highest share was recorded among those aged 15 to 24 (14 per cent), while those aged 65 to 74 and people aged 75 and over had the lowest shares (around 5 per cent).

Eurostat’s report looked into the frequency of drinking regular soft drinks, whether carbonated or not carbonated, bottled iced tea, energy drinks, syrup-based drinks and similar or any other non-alcoholic soft drinks that contain (a lot of) sugar.

All kinds of light, diet or artificially sweetened soft drinks are not included, neither are coffee and tea, even if sweetened with some sugar.