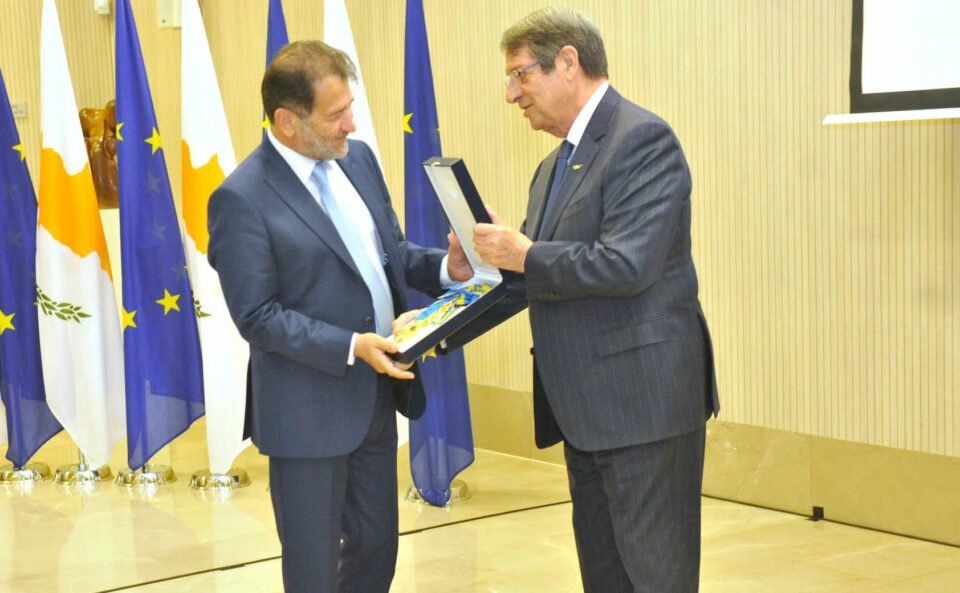 President Nicos Anastasiades on Friday bestowed the Grand Cross of the Order of Makarios lll on Paphos-born Dr Kypros Nicolaides, a world-renowned pioneer in fetal medicine, in recognition of his invaluable contribution to science and society more generally.

At a ceremony at the presidential palace, Anastasiades paid tribute to the London-based doctor whose discoveries have revolutionised the field and earned him the title the ‘Miracle Maker’.

Anastasiades noted that Cyprus’ highest honour is normally awarded to heads of government, and only in exceptional cases to distinguished personalities.

“As President of the Republic of Cyprus, taking into consideration the invaluable contribution of Professor Kypros Nicolaides in promoting health, and particularly the field of fetal medicine, I decided that the only worthy honour to this world known scientist was to award the Grand Cross of the Order of Makarios lll,” the president said.

As a doctor, Nicolaides has dedicated his life to fetal health, developing pioneering research and clinical programmes for prenatal diagnosis and treatments and inextricably linking his name to numerous breakthroughs in diagnostics, including of the Down Syndrome, which Anastasiades said was recognised a leading medical discovery of the past 30 years.

Through his work in medical schools and scientific publications he has helped advance prenatal medicine and opened up the horizons to the revolutionary sector of fetal surgery, the president added.

Nicolaides has helped promote accessibility to these breakthroughs with the establishment of the non-profit Fetal Medicine Foundation in 1995 which has invested millions in research and training, and offered scholarships to doctors worldwide, among other. He was also instrumental in setting up the Fetal Medicine Centre at Southend University Hospital while his research institute financed the establishment of the Fetal Medicine Research Institute of King’s College University Hospital.

Cyprus has also benefitted from the doctor’s expertise and generosity, the president said. The Fetal Medicine Centre has worked closely with the Makarios Hospital’s gynecological department to deal with high-risk pregnancies, while Nicolaides donated cutting edge ultrasound equipment to the hospital. In recognition of the professor’s contribution, a maternity ward at the hospital was named after him.

Indicative of the world recognition Nicolaides enjoys was his recent election to the US national academy of medicine – one of only 10 clinical doctors who are not US citizens, Anastasiades said.

Nicolaides has given hope to thousands, earning his reputation as a miracle maker, honouring not just his science, but his country, remaining modest and accessible at all times and becoming the best ambassador for Cyprus, the president concluded.

Accepting the award, Nicolaides said he saw it as a tribute to the love and support to the doctors worldwide who have dedicated their lives to the service of women and their newborns.

“To those who will not compromise with the tragic reality that every minute a woman somewhere in the world dies as a result of a complication in her pregnancy or at childbirth and that the large majority of these can be avoided. To the doctors who dedicated their lives to reducing peri-natal mortality, forecasting and preventing premature births, congenital anomalies, placental insufficiency, and other,” he said.

Today’s honour was a challenge to him to continue his work to train doctors round the world and promote research in fetal medicine.