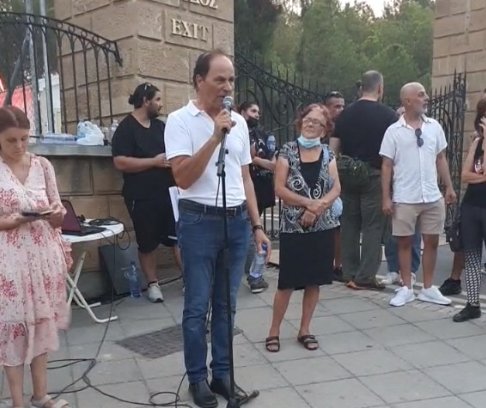 One of the speakers at the protest on Saturday night

Scores of people gathered outside the Presidential Palace in Nicosia on Saturday evening to protest the vaccinations of children.

The protest, organised by Foni Laou in cooperation with other groups, was against obligatory vaccination and the vaccination of children.

Several participants took to the microphone to express their concerns for the vaccines against Covid, narrate their own experience with vaccinations and state their opposition to what they described as forced inoculations.

Protesters also shouted the slogan “Hands off our children.”

Organisers had called on everyone to join them in a peaceful protest against pressure on people to get vaccinated.

They said that in September, when schools reopen, there will be a lot of pressure on people to vaccinate themselves and their children.

“It is now up to all of us to protect our children and our rights,” they said.

Police had earlier in the day warned they would intervene if protests turn into mobs and called on organisers of such events to comply with the measures.

Citing upcoming protests including the one on Saturday night, police said they have contacted the organisers and called on people planning on attending such events to follow the health ministry’s guidelines as regards the use of masks and social distance. They pointed out that people need to keep at least 1.5 metres distance between them.

A protest against the measures attended by thousands of demonstrators ended in violence last month when the building of Dias media group was attacked.