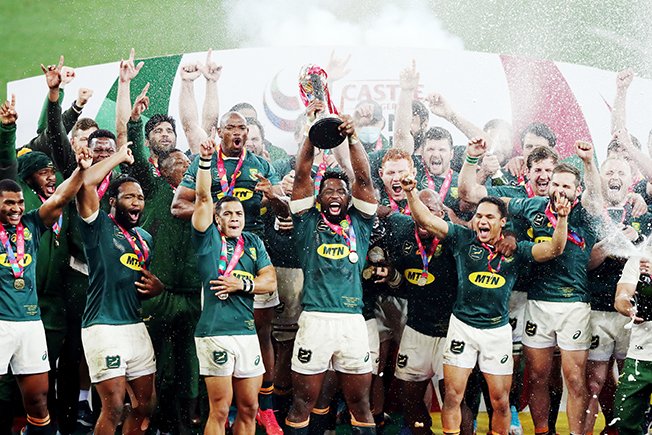 Veteran Morne Steyn kicked over a last-gasp penalty to hand South Africa a narrow 19-16 victory over British and Irish Lions in the third and final test on Saturday to seal a 2-1 victory in a controversy-laden series.

The 37-year-old reprised his heroics from 12 years ago when he did the same for the Springboks to win the 2009 series over the tourists.

After Ken Owens had gone over for the Lions in the first half, a second half try from Cheslin Kolbe saw the home side fight back from 10-6 down at halftime at the Cape Town Stadium.

The Lions had won the first test 22-17 but the Springboks were 27-9 victors in the second clash. Both teams were admonished by World Rugby for trying to influence referees with comments through the media after a series of controversial incidents.

The Boks had said before the game this would be a bigger achievement than winning the World Cup in Japan two years ago, and it showed as they celebrated wildly at the final whistle.

The Lions were much more positive than in the first two tests, and at times were inventive and expansive with ball in hand, turning down kickable penalties in search of more.

But once again they found the going tough in the second half as the Boks used their brawn and brains to slow the game and stifle the territory and attacking chances for the visitors.

Lions flyhalf Dan Biggar missed an early penalty chance for the visitors, but the Welshman was forced off after 10 minutes with an ankle injury and was replaced by the excellent Finn Russell who had barely played on tour after an Achilles injury.

Pollard put the Boks ahead with a penalty after a dangerous attack into the Lions’ 22, but the visitors won a scrum penalty and Russell was able to level the score.

They were rewarded for choosing an attacking line-out rather than an easy three penalty when Owens drove over the tryline from the back of the maul.

The Lions had most of the territory in the first 35 minutes, but when the Boks ventured into their half they won a scrum penalty and Pollard closed the gap as the Lions led 10-6 at halftime.

Pollard missed two penalties, but then came a moment of magic from Kolbe that gave the Boks the lead. A high ball was not collected by number eight Jasper Wiese, but referee Mathieu Raynal ruled, with the help of Television Match Official Marius Jonker, that the ball had gone straight up and not forward.

Centre Lukanyo Am set fullback Willie le Roux away and when he released Kolbe, the wing showed a wicked sidestep to beat two defenders and score.

The match officials took an age to review the decision and Lions captain Alun Wyn Jones was clearly frustrated with the outcome.

The teams traded penalties, but it was the Boks who had the chance to win the game. They won a penalty straight in front of the posts, overpowering the Lions at the scrum again, and Steyn showed nerves of steel to repeat his series-wining feat of 12 years ago.

Coronavirus: Protest against vaccination of children