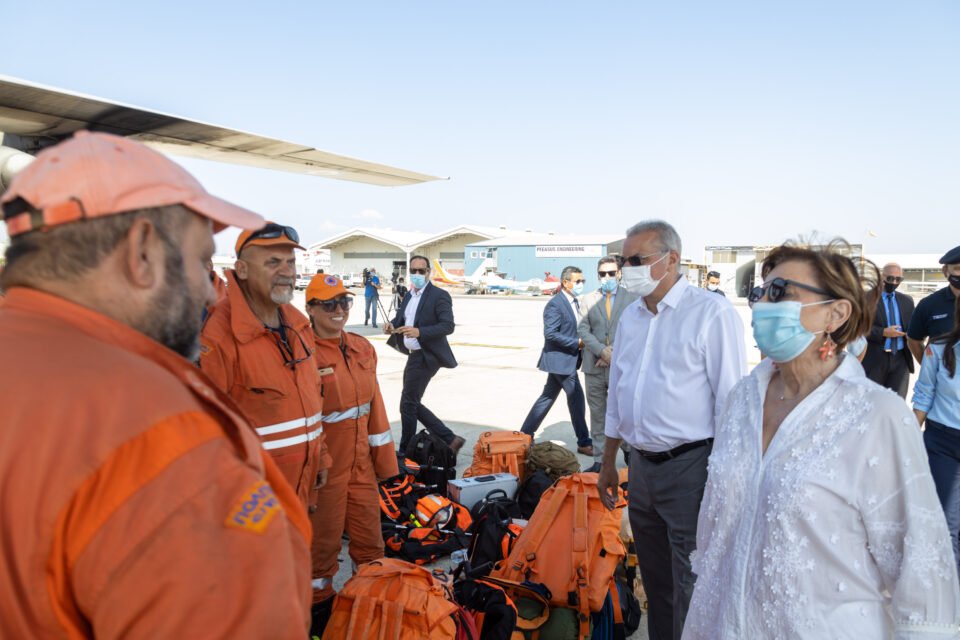 State officials welcomed the Cypriot firefighting mission who returned from Greece early on Friday after battling “some of the worst fires” for more than a week in Attica and Evia.

Interior Minister Nicos Nouris and Justice Minister Stephie Drakou visited Larnaca international airport on Friday morning to welcome the Cypriot crews and congratulated them on behalf of the state for their “courage and selflessness”.

“Despite any difficulties, the presence and action of the Cypriot mission was crucial,” Drakou said.

During critical times, the unit demonstrated “operational readiness and a high professional level,” and contributed significantly to the management of the fires, she added.

Their work was recognised by both the Greek authorities and the media who referred to well-trained staff, suitable for special missions of increased difficulty and risk, the justice minister said.

The altruism of the crews, which were one of the first to respond to the country’s call for help, was an “oasis” for the catastrophic developments in Greece, Nouris said in his own statements.

All the members of the mission were called upon to respond under “unprecedented, adverse and dangerous conditions” since they arrived in Athens on August 4, the civil defence said in a written statement.

They worked in steep areas that were difficult to access and managed to contain flare-ups before they spread to other areas, it was added.

The team, which included 20 volunteers from the civil defence, 20 firefighters and four plane operators as well as ground operators by the forest department, showed “zeal, professionalism and self-denial”.

“Volunteering, served again as a means of strengthening the state machine and forging social solidarity,” the announcement added, referring to the 20 rescuers of the civil defence.

Assistant chief fire officer Demetris Katsiflis who led the 20 firefighters said the fires in Greece were the worst he experienced in his career and that the team saw ‘tragic’ and ‘heartbreaking’ images.

“We saw the pain of residents in their eyes and their movements, [and] many times their panic,” Chrysilios Chrysiliou, head of the civil defence crew, told the news agency.

Chrysiliou said that fear was evident every day.

“Every day was different, another experience and danger…that we could not predict nor know,” Chrysiliou added, explaining that the team was receiving information for their next location late at night.

And then the team would “climb steep slopes with sacks of water on their backs to go somewhere far away to put out a fire that we did not even know exactly its size,” he said.

However, there was faith in the Cypriot crews and their training, the civil defence official added.

The Cypriot team operated “in excellent coordination with their Greek colleagues… on multiple fire fronts, under heat conditions,” the civil defence said in their announcement.

Greece’s worst heatwave in three decades contributed to some 586 fires across the country in the span of two weeks, burning more than 93,600 hectares of forest and farmland, according to the European Forest Fire Information System (EFFIS).

Four civil defence rescuers and one firefighter who had fractured his shin returned to the island late on Wednesday, while the rest of the team returned early on Friday.

“We had a few injuries but considering the size, complexity and the dangers we faced, I can say that we returned successfully,” Chrysiliou said.

News podcast: A new website maps holy sites for all faiths in Cyprus

Hopefully, the above information has clarified things for you. As it was previously mentioned, if you are not sure whether you want to allow the cookies or not, it is usually safer to leave cookies enabled in case it interacts with one of the features you use on our Site. However, if you are still looking for more information, then feel free to contact us via email at [email protected]l.com