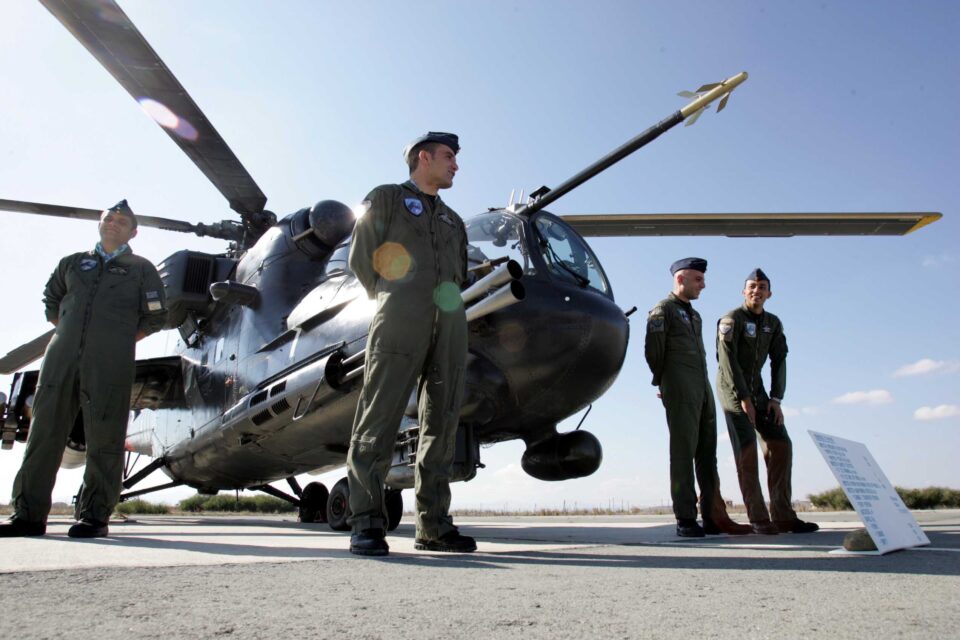 The helicopters are becoming outdated and upkeep costs are prohibitively high

The defence ministry has neither confirmed nor denied reports that Cyprus will replace its ageing fleet of Russian-made Mi-35P combat-transport helicopters, in a potential deal costing anywhere from €150 million to €300 million.

Last week daily Politis, citing classified documents it obtained, said the cabinet recently green-lit the start of negotiations for the intended sale to Serbia of the National Guard’s 11 Mi-35P attack helicopters.
Under the plan, once a sales deal is closed the Cypriot military would seek 12 newer-generation attack helicopters. According to the documents seen by Politis, the proposal concerns buying six choppers initially, with the option of six more later, over a 10-year period.

When contacted, defence ministry spokesperson Christos Pieris told the Sunday Mail the government has a longstanding no-comment policy on armaments-related issues.
The only information he would confirm is that Serbia has shown an interest in Cyprus’ attack helicopters, and that a senior Serbian official had recently come to the island for this purpose.

He was alluding to Politis’ reveal that in early April of this year, a team of Serbian technicians, led by the country’s Assistant Minister for Material Resources Nenad Miloradovic, visited the Andreas Papandreou airbase in Paphos to inspect the Russian-made helicopters.

Subsequently, again according to the paper, on May 20 Serbia’s defence ministry wrote to its Cyprus counterpart formalising its interest for acquiring the Russian choppers. In the same missive, the Serbs also requested that the Cypriots name their price. The proposed transaction would materialise via an interstate deal.

Both the defence ministry and the military high command are said to be in favour of offloading the Russian Mi-35Ps, for two reasons: first, the helicopters are becoming outdated; and second, the upkeep cost over the next 10 years is estimated to run as high as €100 million.
In particular, two general repairs are scheduled over the coming years: one in 2021-2022, the other in 2026-2027.

From information available online, the National Guard’s 11 Mi-35Ps were overhauled in Russia in 2007 and 2008.

In December 2013, Cyprus’ defence ministry and Rosoboronexport signed a contract valued at €28 million to service the Mi-35P helicopters for the second time.
Rosoboronexport is the sole state organisation in Russia for exporting the entire range of military, dual-use products and services and technologies.

On a related point, Pieris said that to his knowledge all 11 Russian helicopters are currently airworthy and fully operational.

Asked by the Sunday Mail how the National Guard has used the attack helicopters since acquiring them some 20 years ago, he cited tactical reconnaissance and training. They are not suited for search-and-rescue or firefighting missions, and have never been deployed as such.

Speaking on condition of anonymity, a source told us that in general the purchase of military equipment from Russia often presents a hassle, as frequently there is no follow-up from the seller or manufacturer.

“For repairs and maintenance, you tend to get referred to third parties, not an optimal situation,” the source said.

And sources from the National Guard high command earlier told Politis that the Mi-35Ps cannot operate at night-time.

In 2001 Cyprus purchased 12 Russian Mi-35Ps, one of the last armaments projects implemented during the administration of Glafcos Clerides. At the time it was framed as a deterrent to a potential attempt by Turkey to provoke a military incident while Cyprus finalised its accession to the European Union.

According to Politis, the House defence committee was kept in the dark about the purchase of the helicopters, with the then-Defence Minister Socrates Hasikos informing parliament after the fact.
The helicopters had been secretly transferred to the Andreas Papandreou airbase aboard Russian transport aircraft.

One of the 12 helicopters crashed in July 2006 during a training exercise in Ayia Marinouda, Paphos. Both the Russian officer and the Greek Cypriot trainee pilot were killed.

Another aspect, highlighted by Politis, relates to US and EU sanctions against Russian companies – a situation that complicates wiring money to a Russian armaments manufacturer as payment for repairs.

In April 2018, a spokeswoman for Rosoboronexport told Reuters that new US sanctions against it were designed to squeeze Russia out of the global arms market.

The United States at the time imposed sanctions against Russian businessmen, companies and government officials, striking at associates of President Vladimir Putin in one of Washington’s most aggressive moves against Moscow.

In Cyprus meanwhile, in early May 2018 the Securities and Exchange Commission alerted the entities it supervises that they should pay special attention to the latest updated US sanctions against Russian individuals and corporations.