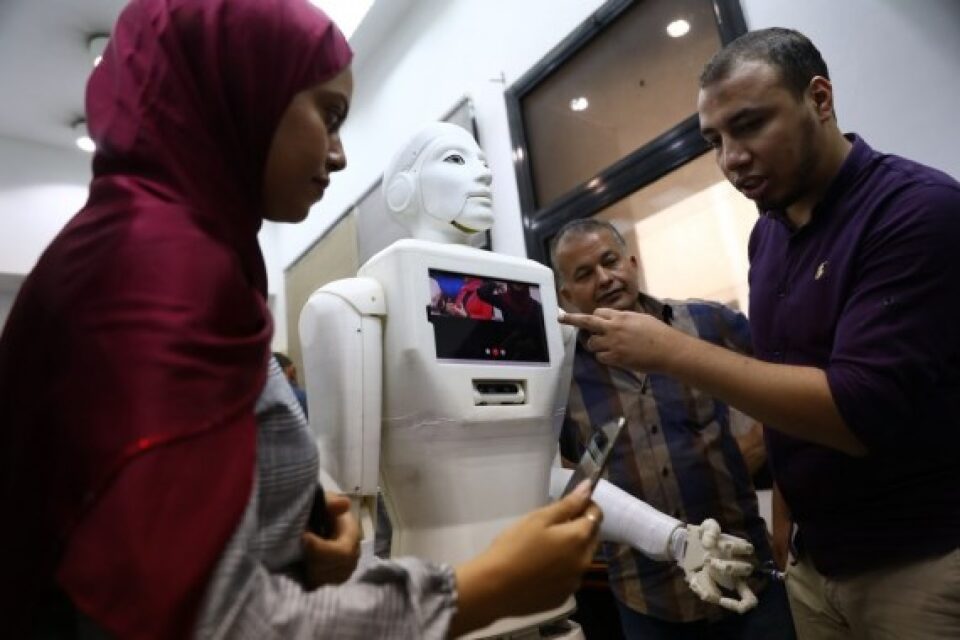 A white-colored, feminine-looking android was standing imperturbably inside a lab of Cairo’s Ain Shams University, with members of her development team and reports via a touch screen on her chest.

The android was the latest invention of some students and faculty members of Egypt’s Ain Shams University, who hoped the robot, equipped with specialised software and medical kits, could help medical workers and patients during the pandemic.

The robotic nurse was named “Shams,” meaning the Sun in Arabic, because it is a common Arab female name and part of the university’s full name.

Esraa Tarek, a teaching assistant at the faculty, stood next to Shams in the middle of the computer lab and explained how the robotic nurse could help reduce direct communication between medics and infected patients.

“The current version (of the android) performs several tasks, such as taking medicines from the pharmacy to the patients’ room, taking samples from the patients’ room to the lab, making video calls between patients and doctors and reading the basic conditions of a patient based on the monitor next to them,” the young woman told Xinhua.

Shams, the robot nurse, can also sterilise a corridor or rooms at a hospital and conduct a patient’s initial diagnosis through questions and answers about temperature and symptoms, Tarek explained.

“Open a video call with the patient!” Tarek told the robot nurse, giving her a direct voice command, explaining that the team applied artificial intelligence (AI) technologies to many functions of the robot.

With a touch-screen monitor on the chest area, the robotic nurse, who can speak Arabic, moved around the lab through installed cameras that provided the robot with vision and orientation.

Among the dozen-member team in charge of the robot, Nabil Mokhtar, a junior student, is responsible for the communication between the devices via a special mobile phone application they made.

“I manage the communication between devices so that when you give a command to the robot, it immediately receives it and the execution process starts right away,” Mokhtar said, expressing his pride to be part of the project.

Meanwhile, his colleague Ahmad Ragab is in charge of the robot’s electrical, power management, and battery charging parts.

The university chief has recently witnessed the tests of the robot nurse, accompanied by professor Nagwa Badr, dean of the Faculty of Computer and Information Sciences, who supervised the project.

Metini told a local TV show that the team in charge of the project, including students, professors and researchers, worked very hard to bring it to light and the university provided full support to them.