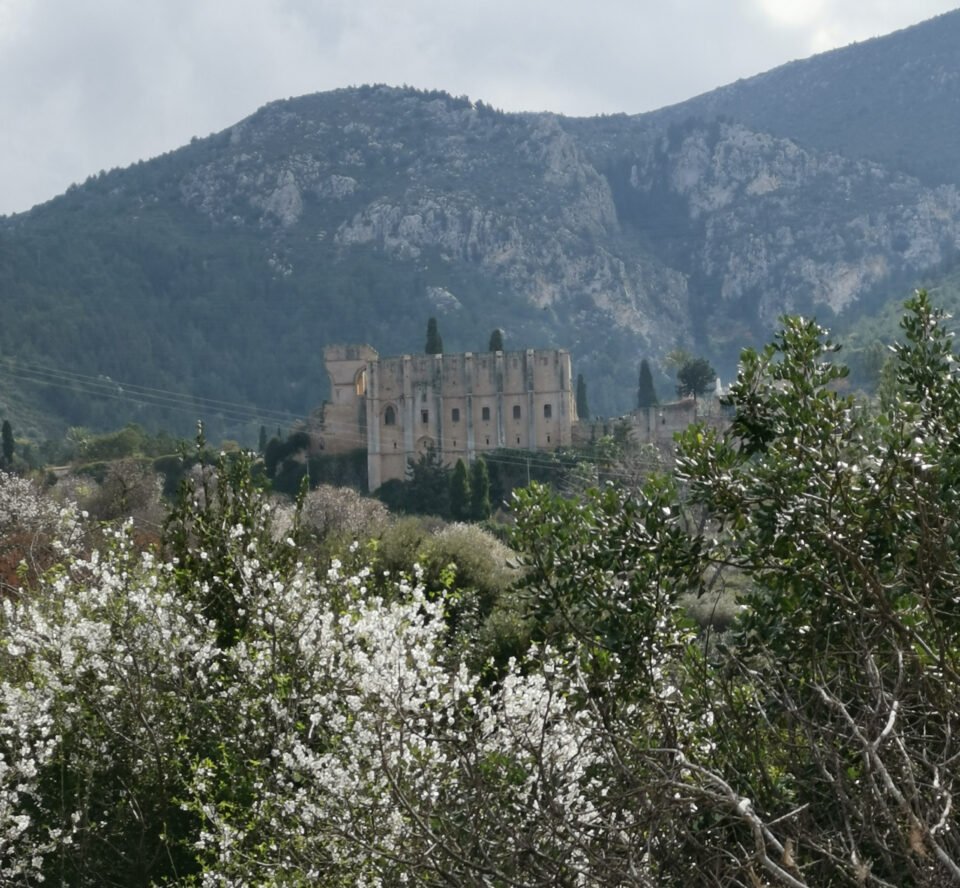 The ancient trail between Bellapais Abbey and Kazafani has recently been obliterated in an effort to make a road, to the distress of many who now want it restored

A heated debate is underway in the north about the future of the historic ‘Crusader Path’, an old cobbled track that leads up from the village of Kazafani (Ozankoy) to Bellapais Abbey.

The path, cherished by nature lovers and highly popular among guides specialising in historic and botanical tours, was recently obliterated by lorries and heavy machinery despatched to the site by a local resident who owns over 20 donums of land along the way.

Bellapais resident and well-known property developer Hasan Sungur says he received verbal permission from the authorities in north Cyprus to “renovate the path” because it was becoming increasingly precarious to use.

“The old path has been seriously damaged in several places because work done by an owner of a land below it on his vineyard weakened its foundations so when heavy rains came part of it collapsed. I have spent years going from one governmental office to another asking them to do something about it, telling them I haven’t been able to access my land in the area. Everybody ignored me,” Sungur told the Sunday Mail.

“Finally, two months ago, it was agreed that I could renovate the path at my own expense, following the authorities’ instructions as to what materials I should be using. I was so relieved because soon, if nothing is done to repair it, we won’t have any road there at all. That is why I started working on it.”

When asked by the Sunday Mail if such an authorisation had been issued, both the local administration (which has responsibility for Bellapais) as well as the ‘north Cyprus department of antiquities and museums’ (the official body responsible for the Crusader Path) denied giving any such permission.

“The municipality has stopped the construction work ongoing on the Crusader Path. We are looking into the case,” the municipality stated. The antiquities department declared it was “evaluating the damage done to this historic site” while at the same time “working on its restoration plan”.

A walk in the area by this Sunday Mail journalist revealed that the path had been levelled and widened. Trees and shrubs have been uprooted and shoved roughly aside, pushed over the edge into a river valley running alongside the path. Most of the old cobblestones have disappeared, covered over by building materials brought in for purposes of “renovation” or perhaps removed altogether.

“I was so shocked when I saw what happened,” Christine Hessenberg, an artist and tour guide, told the Sunday Mail.

“You simply cannot go there now. They covered the path with some powdery cement as some kind of foundation. Your boots fill with dust.”

Hassenberg, who has been organising historic and botanical tours of north Cyprus since 1992, says the trail had been a favourite walk for many local people and also featured regularly in many tourism interinaries.

“It was a special part of my walking tours. Not only did it offer spectacular views but it was especially beautiful in spring, full of orchids and many other plants. It was a place of cyclamens, pink and white rock roses, vetches, blue anchusa, yellow acacia, giant fennel and oak trees. For me personally, it was also a place to get some peace and quiet, where I loved to take my evening walks.”

Asked about the name Crusader Path, the long-term Kazafani-resident relates how, since the Middle Ages when Bellapais Abbey was built, the meandering path was used to bring provisions from Kazafani to the monastery above.

“Unfortunately it has never been formally protected by the ‘antiquities department’. I don’t know why they never declared it to be officially protected. They never erected the proper signs in the area and along the way explaining its significance.”

“The name is rooted deeply in the history. In the medieval times, the village of Bellapais didn’t exist. It was just the abbey. The [surrounding] village was built much later. The nearest village was Kazafani which is why the abbey was called the Monastery of Cozzafani [a variant of Kazafani].” Kazafani, she notes, was where the errant monks were said to flock “to father their children.”

The path has also been cited and referenced in various Cyprus-based  travelogues, notably in ‘Travels in the Island of Cyprus’ by Giovanni Mariti, published in the second half of the 18th century, ‘The Journal of Sir Garnett Wolseley’, the first British Lord High Commissioner (1878), and ‘Our Home in Cyprus’ by Esme Scott-Stevenson, the wife of Andrew Scott-Stevenson, the governor of Kyrenia (1889).

While the accounts of Mariti and Scott-Stevenson recorded their admiration for the ancient olive groves and views on the path leading from Kyrenia via Kazafani to the abbey, Wolseley’s comments focused more on the actual condition of the track.

In 1878 he wrote: “Up early and started at 6am for Belpayis which is about 4 miles from Kyrenia. The track going there is very bad. There is not a wheeled conveyance of any sort in the district because, I suppose, there is not a road on which wheels could travel.”

Interesting therefore to note how Wolseley’s sentiments regarding the state of the path almost 150 years ago are echoed today by Sungur who wants to build several houses on his land below the abbey (“in strict accordance with the existing law”). He laments the fact that without a proper access to the site of the planned properties, the whole enterprise makes no sense.

“This is their duty,” he claims.

“Besides, what is wrong with trying to make Bellapais more beautiful and making this road better? Right now, if there is a fire in the area, even a fire brigade cannot get there. Last time we had to open a new road from another side just for this purpose.

“People want a proper road and I am a crazy man who wants to invest in it. I will do whatever the authorities tell me to do as long as the road is renovated. Ideally, they should work with me instead of playing three monkeys.”

Despite all, Sungur remains confident (and determined) that he will solve the problem.

“This land is my dream land and I want to build three villas there for myself and my two sons. I love the place and love always wins.”

However, not everyone is equally convinced.

“This is not the first attempt by Mr Sungur to interfere with this path and widen it so that he can develop his land. The truth is that as long as he doesn’t have a proper access to his land, he cannot get permission to build on it,” Sabri Abit, owner of the well-known Bellapais Gardens Restaurant, perched just above the path, told the Sunday Mail.

“He tried two times before but we managed to stop him. I am not against repairing the path and using it in its original way. The road is historically important and needs protection.”

Abit, a stickler for the rules, believes developers must adhere to the regulations as they apply if this historic and scenic area is to be preserved.

As noted, the Sunday Mail tried to verify whether the authorities had provided the developer with a permit to build his villas. The far from affirmative answer indicated that the Kyrenia municipality is still looking into the claim while awaiting the submission of the relevant documentation on the developer’s behalf. What they were quite clear about was that for Mr Sungur to merely say that he has such permission “doesn’t mean he can interfere with the existing road.”

Meanwhile the ‘Crusade Path protection camp’ has gained a powerful ally in its attempt to save the path and return it to its original state.

“This path is very ancient and we will not allow it to be spoilt. We will fight for it and insist it is renovated in the same way as it was built originally”, a forthright Orhan Tolun, the president of the Cyprus Turkish travel agents association, told the Sunday Mail. A registered tourist guide, Tolun often takes groups on tours of the area.

“I have already had a chat with Mr Sungur and he has assured me that he is willing to cooperate. What we need now is to establish how the path was built in the first place and then rebuild it exactly like that. Soon there is to be a meeting between the head of the antiquities department, Hasan Sungur and myself. Then we will discuss the issue in depth and hopefully resolve it.”

Tales from the Coffeeshop: From triumphs to the Taliban