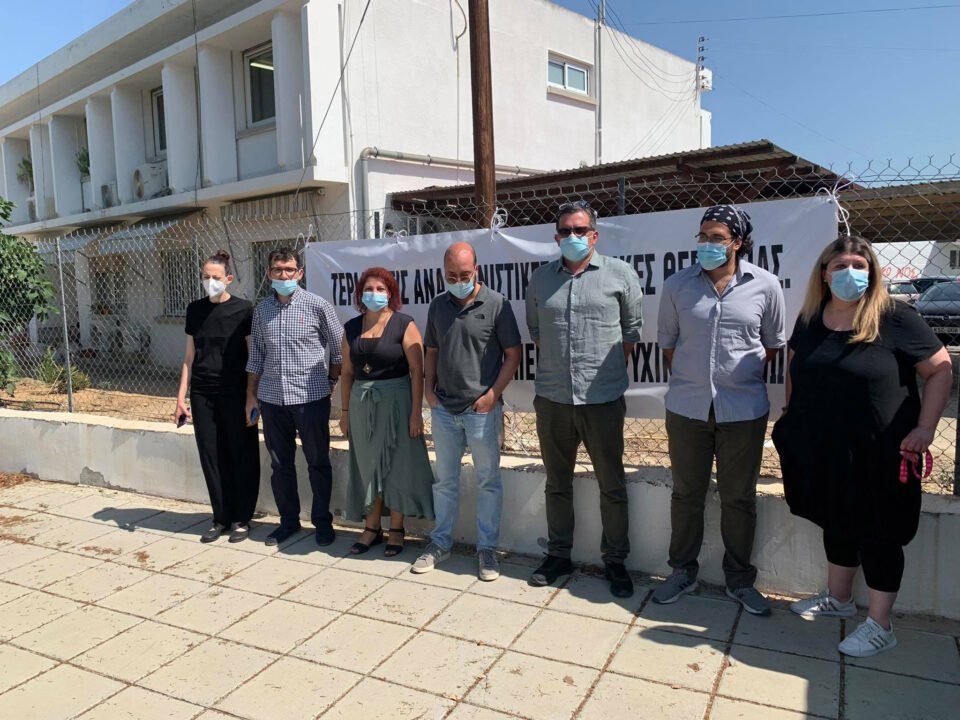 Doctors on strike in June outside the Athalassa hospital (Christos Theodorides)

Health professionals at the already overcrowded Athalassa psychiatric hospital are pulling overtime as they strive to process increased daily admissions plus the five patients and one nurse who have tested positive for the coronavirus.

“We are trying to manage the situation however we can. There are many difficulties because there are…increased admissions, with requests increasing year on year,” psychiatrist and clinical department director Irini Georgiou told the Cyprus Mail.

The first Covid-19 case was detected at the end of last week after which patients and staff underwent rapid tests, while the results from samples of PCR tests are expected by Tuesday, Georgiou said.

So far, five patients from two different wards have tested positive, she said. As of Monday morning, there were 117 patients treated in Athalassa mental hospital, which has a capacity of 101 patients.

All the patients are asymptomatic and being treated at the assigned Covid ward of the hospital separately from the rest.

Last November, the hospital was accused of locking a mentally ill woman in a closed room meant for temporarily monitoring aggressive patients after she contracted the coronavirus. The room did not have an operational shower or toilet and the patient was forced to use a commode wheelchair with a plastic bag during the four days she was left there.

The hospital’s infection committee relocated certain wards and altered its guidelines 14 times until a suitable room was assigned to isolate possible asymptomatic coronavirus cases, officials had told the Cyprus Mail.

According to a source from within the hospital, the new cases do not concern people who have additional health problems such as respiratory issues that could make them more prone to serious illness.

“However, whenever there is a confirmed case, additional stretch is put on the hospital as some nurses need to be reassigned from their posts to the Covid ward,” the source explained.

And the hospital must also manage with daily admissions, with Georgiou confirming that they received patients even over the weekend.

An additional difficulty is that a lot of employees are taking days off for summer holidays this month.

“Unavoidably, the staff who are at the hospital are pulling overtime,” the source added.

Apart from people with mental illnesses, the hospital also treats people with special needs and illegal drug users that the court has ruled for mandatory treatment. Some people enter the hospital after they are arrested by police.

In one recent case, a person who was ordered for inpatient mandatory treatment had to remain in police custody for longer, because the hospital had once again exceeded its capacity and were unable to receive him.

“This happened when the hospital was full,” Georgiou said, and explained that the relevant legislation was followed that provides for an officer to remain with the person until his admission to the mental hospital.

Meanwhile, an additional eight beds were expected to be made available at the Limassol general hospital’s psychiatric unit by the end of April.

However, works have yet to be completed, while Athalassa’s staff have lost faith over the promised works for the construction of new facilities in Nicosia to replace the 57-year-old building.

Athalassa hospital has also been operating without a pharmacist, social worker or a general practitioner since the implementation of Gesy, forcing staff to accompany patients to Nicosia general hospital for any minor health incidents.

Our View: Passport move nothing more than a gesture for home consumption