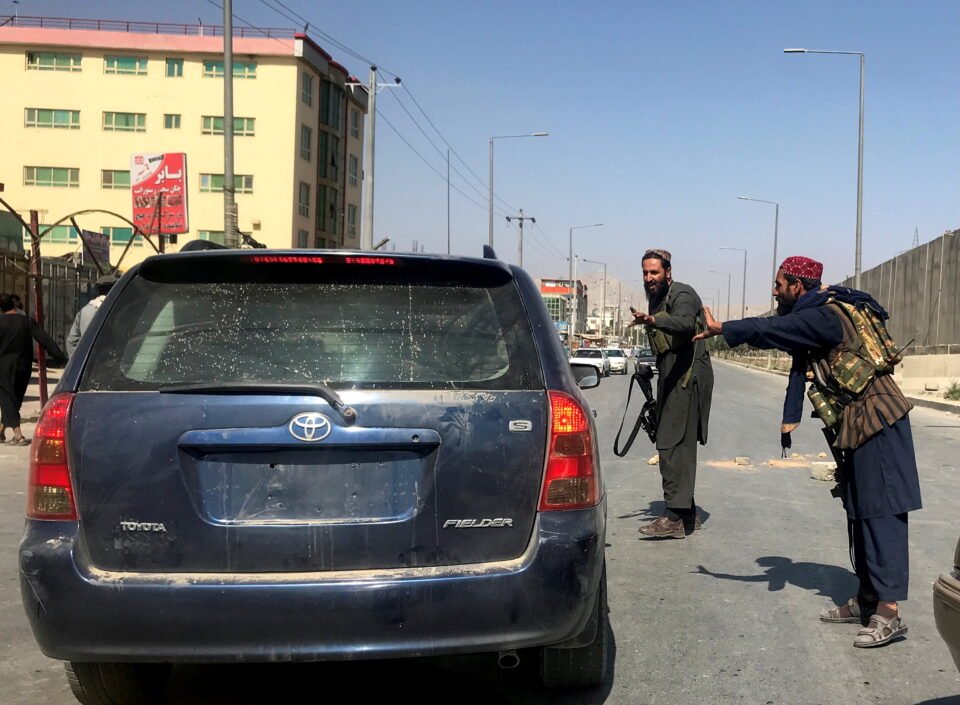 Members of Taliban forces gesture as they check a vehicle on a street in Kabul,

Violent Islamist movements, as current events in Afghanistan demonstrate, have had some success in Muslim countries that have been invaded by the United States. But they have failed everywhere else, and the whole Islamist ideology is getting long in the tooth. Revolutionary ideologies rarely prosper after they pass the age of fifty.

There is much media chatter at the moment about how the Taliban’s victory will inspire like-minded groups elsewhere and lead to a steep rise in terrorist attacks. Some of this is just journalistic panic-mongering, but various military and political interest groups will also promote this notion for their own purposes.

We will therefore soon find ourselves being urged to engage in a new ‘war on terror’. It wouldn’t be as big, long, and counter-productive as the first one, but much time and money and many lives would be wasted if it got off the ground. So think of this as an aide-memoire on why that would be a very stupid thing to do.

The Taliban are Afghans, of course, but Islamist terrorism is primarily a phenomenon of the Arab world. That is the part of the Muslim world where the rulers are most brazenly cruel and corrupt. Many Arabs have been attracted to Islamism as a possible way to replace those rotten regimes – and some of them have concluded that only violence can bring Islamists to power.

Nothing remarkable about this. A whole generation of anti-colonial revolutionaries in Africa and Asia reached a similar conclusion, embracing Marxist ideology as their excuse for violence and as a pseudo-religious guarantor of victory. The big difference is that they won (and then mostly dropped the Marxism) – whereas in the Arab world, corrupt tyrants are still in power almost everywhere.

A minority of Arabs therefore buys the Islamist argument that the deplorable state of the Arab world is due to the fact that Muslims are failing to live their lives as God intends – in the radical version of Islamic observance that Islamists believe is the only correct interpretation of God’s will.

The solution to the Muslim world’s current plight, therefore, is to install revolutionary Islamist regimes that will enforce that version of God’s will on the population, whereupon with God’s help  they will start to win. A united Muslim world will arise that breaks its current shackles, achieves great power and prosperity – and in some versions, converts the entire world to Islam.

An attractive vision for many Arabs who were near despair, and the 1970s, ‘80s and ‘90s were filled with attempted Islamist revolutions from Algeria to Saudi Arabia – all of which failed. The Islamists never managed to convince enough people that this pipe dream was worth dying for. So around 1999 an Islamist leader called Osama bin Laden came up with a new strategy.

The only way to mobilise enough Muslims behind the Islamist dream, he believed, was to provoke a direct assault on Islam by the infidels. And the only way to motivate the lazy infidels to play their allotted role in this strategy was to attack them directly – not to conquer them, which was impossible, but to trick them into invading Muslim countries.

That was the strategy behind the 9/11 attacks, and it succeeded even beyond bin Laden’s expectations. The outraged United States declared the ‘War on Terror’ and invaded not one but two Muslim countries, Afghanistan and Iraq. The former had little to do with 9/11 and the latter nothing at all, but the invasions had the effect that bin Laden was seeking.

Twenty years later, however, the benefits for the Islamist cause have been quite limited. The Taliban are finally back in power in Afghanistan, and there was an interval when ‘Islamic State’ (ISIS) controlled a lot of Iraq and even expanded into Syria, but there is still not a single revolutionary Islamist regime in the Arab world.

The obvious conclusion is that this strategy has definitively failed. Even with the help of Western invasions and the ‘War on Terror’, the Islamists have been unable to convince enough Arabs that they are the right solution to the Arab world’s problems.

There will doubtless continue to be scattered Islamist terrorist attacks both within and beyond the Arab world for many years, although probably none as dramatic as the 9/11 events. But the notion that the Taliban take-over in Afghanistan will lead to a huge new wave of Islamist terrorism is absurd.

The Taliban’s victory was discounted in advance years ago, and the idea of provoking US invasions as recruiting tools for Islamist revolutions is now very old hat. Even Washington can see through it.

Our View: Passport move nothing more than a gesture for home consumption