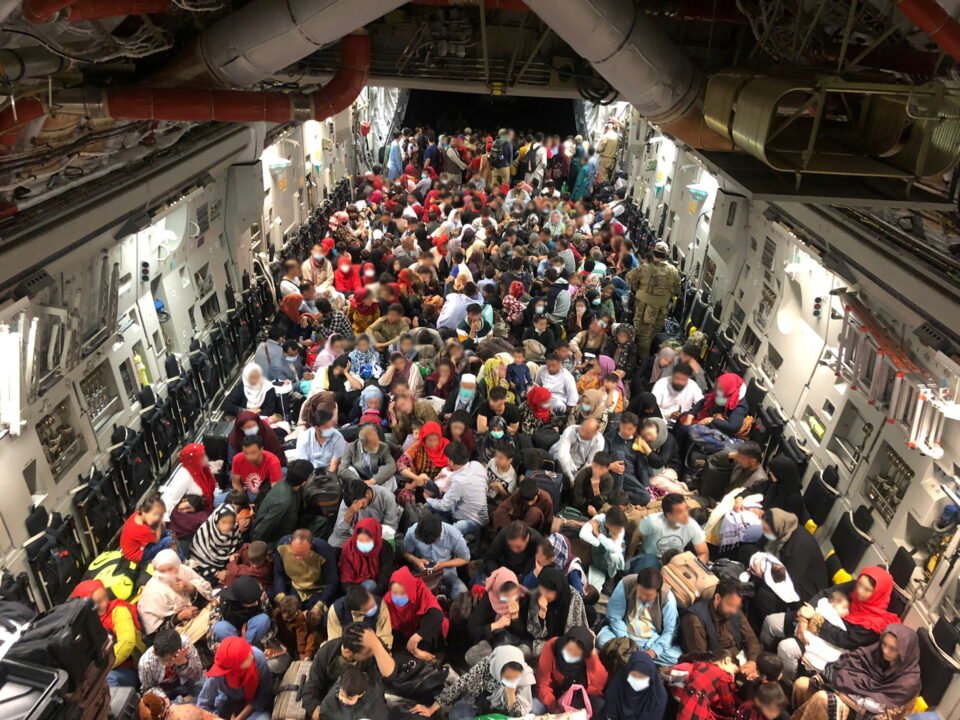 Evacuees termed Canadian Entitled Persons sit in a Royal Canadian Air Force (RCAF) C-177 Globemaster III transport plane for their flight to Canada from Kabul, Afghanistan, August 23, 2021. Picture taken August 23, 2021. Canadian Armed Forces/Handout via REUTERS. ATTENTION EDITORS - PARTS OF THE IMAGE HAVE BEEN PIXELATED AT SOURCE. THIS IMAGE HAS BEEN SUPPLIED BY A THIRD PARTY.

Afghanistan’s neighbours should open their land borders to allow more people to leave, a NATO country diplomat said on Wednesday, as aid agencies warned of a looming humanitarian crisis under the new Taliban rulers.

“Iran, Pakistan and Tajikistan should be pulling out more people using either air or land routes. It’s vital air and land routes are used at a very fast pace,” the Kabul-based diplomat told Reuters.

The risk of starvation, disease and persecution rises for the millions who will be left behind after a chaotic exodus from Kabul airport ends, the aid agencies said. U.S. President Joe Biden has said the United States is on pace to finish evacuations by Aug. 31, but left open the chance of extending the deadline.

“There’s a perfect storm coming because of several years of drought, conflict, economic deterioration, compounded by COVID,” David Beasley, the executive director of the U.N.’s World Food Programme, told Reuters in Doha, calling for the international community to donate $200 million in food aid.

“The number of people marching towards starvation has spiked to now 14 million.”

The EU said it was planning a quadrupling in Afghan aid and was seeking coordination with the United Nations on delivery as well as safety guarantees on the ground.

The U.N. human rights chief said she had received credible reports of serious violations by the Taliban in Afghanistan, including “summary executions” of civilians and Afghan security forces who had surrendered. The Taliban has said it will investigate any reports of atrocities.

The NATO diplomat, who declined to be identified, said several international aid groups are desperate to get their Afghan staff to neighbouring nations.

Tens of thousands of Afghans fearing persecution have thronged Kabul’s airport since the takeover, the lucky ones securing seats on flights, mostly arranged by Western governments, that have so far evacuated at least 70,000 people.

The Taliban said all foreign evacuations from the country must be completed by Aug. 31, and asked the United States to stop urging talented Afghans to leave the country.

The Islamist group, which marched into Kabul on Aug. 15, has told the Afghans crowding the airport in the hope of boarding flights that they had nothing to fear and should go home.

“We guarantee their security,” Taliban spokesman Zabihullah Mujahid told a news conference in the capital on Tuesday.

Biden has left open the prospect of extending the deadline after discussing the issue with other G7 leaders.

In remarks at the White House, he said the United States was racing to meet the Aug. 31 deadline  as concerns mount over the threat of militant attacks.

“The sooner we can finish, the better,” Biden said. “Each day of operations brings added risk to our troops.”

Two U.S. officials, speaking on condition of anonymity, said there was growing concern about the risk of suicide bombings by Islamic State at the airport.

Leaders of the G7 major industrialized nations – Britain, Canada, France, Germany, Italy, Japan and the United States – met virtually to discuss how to complete the chaotic withdrawal and deal with the Taliban now that they have seized power.

The talks did not result “in new dates” for the end of the evacuation mission, German Chancellor Angela Merkel said, although there were intensive discussions on whether a civilian-operated airport in Kabul could be used after Aug. 31.

British Prime Minister Boris Johnson said the top condition of the G7 agreement was that militants must allow safe passage to Afghans wanting to leave the country even after that deadline.

The Afghan government collapsed as the United States and its allies withdrew troops two decades after they ousted the Taliban in the weeks after the Sept. 11, 2001, attacks on the United States by al Qaeda militants, whose leaders had found safe haven in Taliban-ruled Afghanistan.

Leaders of the Taliban, who have sought to show a more moderate face since capturing Kabul, have begun talks on forming a government that have included discussions with some old enemies, including former President Hamid Karzai.