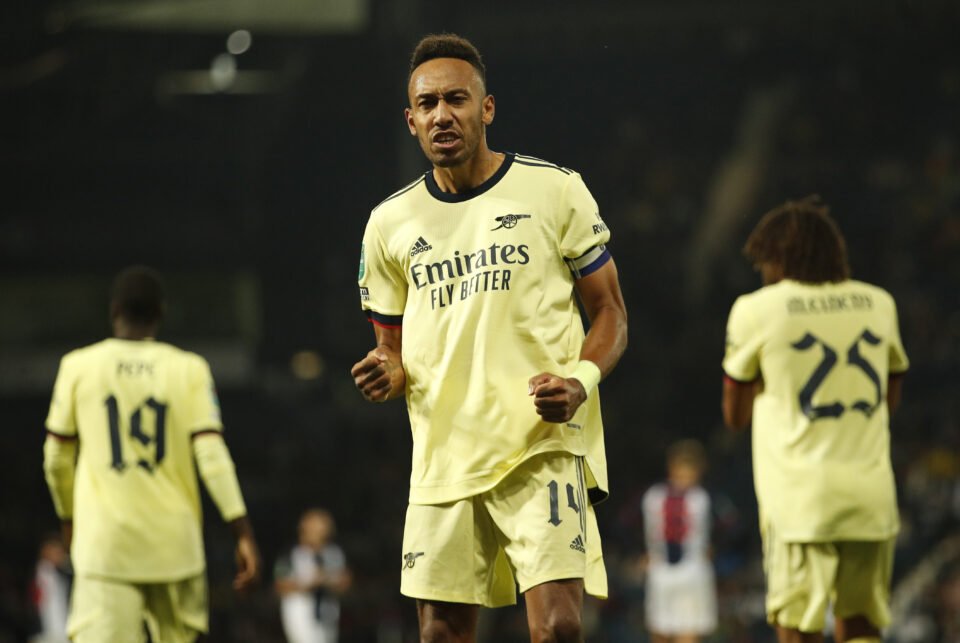 Pierre-Emerick Aubameyang started his season with a hat-trick as Arsenal shook off their Premier League troubles and hit second tier West Bromwich Albion for six to reach the third round of the League Cup on Wednesday.

Premier League rivals Newcastle United and Burnley failed to provide as much excitement for the 30,000 crowd at St James’ Park, that game ending goalless with Burnley winning through 4-3 on penalties.

Aubameyang, returning to the starting line-up after testing positive for COVID-19 before the season got under way, tapped into an empty net in the 17th minute after Bukayo Saka’s saved effort fell to him.

He made it 2-0 on the stroke of halftime, when Nicolas Pepe’s shot rebounded off the post for another tap-in, and then repaid the favour seconds later.

The hat-trick was sealed in the 62nd, Saka having bagged the fourth goal of the game in the 50th, with a strike from 18 yards.

“This hopefully can give us something to build our confidence for the next games. We had to work hard and keep pushing,” said the Gabonese, whose side lost both their opening league matches 2-0.

Manager Mikel Arteta was delighted with the performance and the clean sheet, highlighting also the team spirit.

“We are all disappointed that we haven’t won any of the two games in the Premier League but the attitude of the players and how together they are,” the Spaniard said when asked what had pleased him most.

Alexandre Lacazette came off the bench for his season’s debut and made it 6-0 four minutes later, assisted by Pepe, as Arsenal celebrated their first win of the season against opponents who were effectively a reserve team.

West Brom, relegated from the Premier League last season, made 11 changes from the side that won at the weekend in the Championship and had five players — including goalkeeper Alex Palmer — making their debuts.

Loanee Armando Broja scored in each half on his debut for Southampton and Mohamed Elyounoussi grabbed a second half hat-trick as Newport were hammered in their first home game of the season after having their pitch re-laid.

Nathan Tella (25th), Kyle Walker-Peters (44th) and Nathan Redmond (69th) also scored with Saints running riot in the second half after going in 3-0 at the break.

Holders Manchester City will start their bid for a fifth successive League Cup trophy with a third round home game against third tier Wycombe Wanderers after the draw was made following Wednesday’s games.

Arsenal were rewarded with a home game against third tier AFC Wimbledon, while Southampton travel next to Sheffield United.

Norwich City, who beat Bournemouth 6-0 on Tuesday, will host Liverpool — who won 3-0 at Carrow Road in their opening game of the Premier League season.

It’s not just about being clean and tidy: What OCD really means and how to seek support