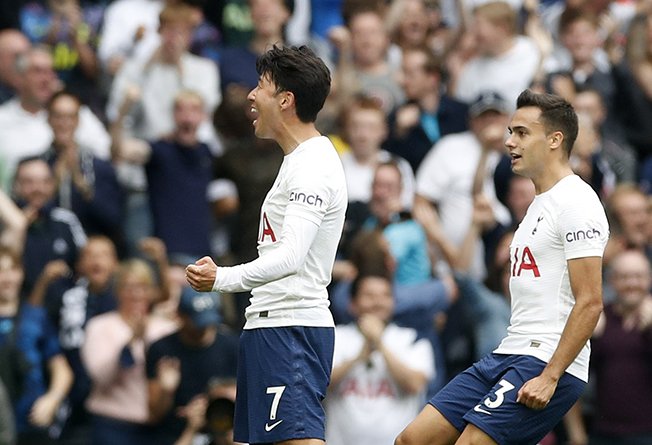 Tottenham Hotspur maintained their 100% start to the Premier League season with a 1-0 win over Watford on Sunday thanks to a somewhat fortuitous first-half goal from Son Heung-min.

Son fired a swerving free kick into the box from the left-hand side that deceived Watford keeper Daniel Bachmann and found the bottom-right corner three minutes before the break.

It was the South Korean’s 72nd goal on his 200th Premier League appearance for the club, helping them to maintain their 100% record under new manager Nuno Espirito Santo and lifting them to the top of the table with a perfect nine points after three games.

Tottenham head into the international break having won all three 1-0, while Watford are 12th with three points, and Spurs fans will be delighted at how well their team has performed despite the turbulence around striker Harry Kane.

England international Kane has dominated the headlines in recent weeks with a lengthy but unsuccessful transfer bid from Manchester City, and Tottenham fans sang in support of him as he made his first start of the season for the club.

Kane could have found himself among the goals but fluffed a great chance when he failed to connect with a cross from Lucas Moura, and moments later he had a well-struck volley saved by Daniel Bachmann.

For all the talk of Spurs’ attack, it is their miserly defence that has been key to their good start to the season and they restricted newly-promoted Watford to two efforts on target over the 90 minutes.

Espirito Santo was delighted with his side but said that Son still had room for improvement, despite getting the winning goals against Manchester City and Watford.

“Sonny is fantastic but I still think he has a long way to go. He will improve his numbers alongside the team. He is a fantastic team player, the way he works. I am happy for him, but the challenge is to push further,” the 47-year-old coach told broadcaster BEIN Sports.

“The players worked hard for that win. In order to achieve consistency, it will take time. It was a difficult game, but really good movement in the second half. There were chances that we have to be more clinical with,” he added.

After the international break Tottenham face three tough London derbies against Crystal Palace, Chelsea and North London rivals Arsenal, but for now they will bask in their position at the top of the table.

“I think they (our fans) should go home proud as the boys worked hard for them,” Espirito Santo said.

Mason Greenwood’s late winner earned Manchester United a 1-0 win at wasteful Wolverhampton Wanderers in the Premier League on Sunday, breaking the record for the longest unbeaten away run in English Football League history in the process.

Greenwood’s low strike was decisive after Wolves had missed a host of chances throughout the match as United made it 28 unbeaten on the road in the league, beating Arsenal’s record set between April 2003 and September 2004.

The home side threw everything at United early on, with Raul Jimenez and Trincao going close, but the visitors somehow clung on until halftime, without offering much as an attacking threat.

Wolves continued to the better side after the break, with David de Gea making a remarkable double save to keep out two close range efforts from Romain Saiss.

Jadon Sancho, who had a quiet full debut, was replaced in the second half as United went in search of the winner, with home-grown youngster Greenwood netting his third in as many games to snatch all three points.

Wolves were adamant there was a foul from Paul Pogba in the build-up to the winner but nothing was given, as United made it seven points from nine so far this season to sit third in the standings, while Wolves stay 18th without a point or goal.

Bamford earns Leeds a point after battle with Burnley
Patrick Bamford celebrated his England call-up with the equaliser on Sunday as Leeds United came back for a 1-1 draw at Burnley in the Premier League.

Burnley striker Chris Wood scored in the 61st minute against his former club, turning in a low drive from Matt Lowton from close range after a goalmouth scramble followed a James Tarkowski header against the bar.

But Leeds took a share of the points after Raphinha’s low drive was blocked, Jamie Shackleton drilled the ball into the box and his effort was poked in by Bamford.

Ben Mee had a first-half effort for Burnley disallowed after the referee spotted Ashley Barnes had handled the ball, while Raphinha wasted a good chance for Leeds in the first half.