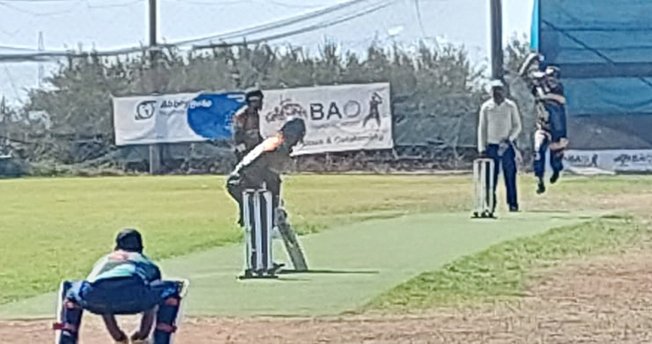 The race for the final of the 2021 CCA #BAOFINANCIAL 40 Over Cup presented by Abbeygate Insurance became a lot clearer on Saturday as Sri Lankans won a gripping game against Black Caps by 2 wickets. They now need only 7 points from their last match to overtake the Caps, who have completed their programme.

On the same day, Moufflons squeezed past Amdocs by 3 wickets, to cement top spot and put their opponents out of the running. Preetaj Deol (31) and Hitesh Thadani (36) led Amdocs to 172, with three wickets falling to Murtaza Yamin, and when Moufflons were reduced to 133-6 an upset seemed possible. But with Waqar Ali making 40 and Gurdeep Sharma 32, the leaders got home safely to maintain their 100% record.

The afternoon game saw Black Caps score a modest 155 (Kuldeep Kumar 35, Kulwinder Singh 31 not out), but then take three early wickets to give themselves hope. Sri Lankans’ captain Mangala Gunasekara followed up his 4-36 with the ball by hitting 51, but a further collapse saw the score slump to 122 for 8. Now Bibi Suresh and Kamal Raiz combined in an unbroken partnership of 38 for the ninth wicket to see the Lankans to their target.

On Sunday a further three matches were played in the 2021 CCA #BAOFINANCIAL T20 Cup, but this time Sri Lankans were on the receiving end as they succumbed to the inconsistent Nicosia Tigers. Despite 48 from Nalin Gamage and 40 from Kapila Hemantha, the Lankans could only muster a modest 137-5 from their 20 overs.

Tigers also struggled in reply, apart from Iftekhar Jaman’s 48, and slumped to 107-7 before an unbroken stand between Jahid Hassan and Bilal Hussain took them to victory. Sri Lankans, unusually, will not be participating in the knock-out phase of this competition, and their remaining hopes lie with the 40-over league.

Riyaan on the other hand are looking very strong T20 contenders, and now top the eastern group after a comfortable win over Everest. Jeewan Lamsal battled through some difficult periods to make 40, and Madhukar Madhush hit a more fluent 35, but the total of 123-6 never looked likely to be enough. Rehman Ali was soon striking boundaries for Riyaan, and his 43 led the way to a 6-wicket win with almost 6 overs in hand.

The final game of the day was in the western group, where Sri Lanka Lions kept up their challenge for second place by beating Limassol Bangladeshis by 8 wickets. Sujith Tennakoon with three wickets for 23, and Chamal Sadun (35) and Suresh Gedara (30 not out) were the main players in a convincing win to a match played in good spirit.