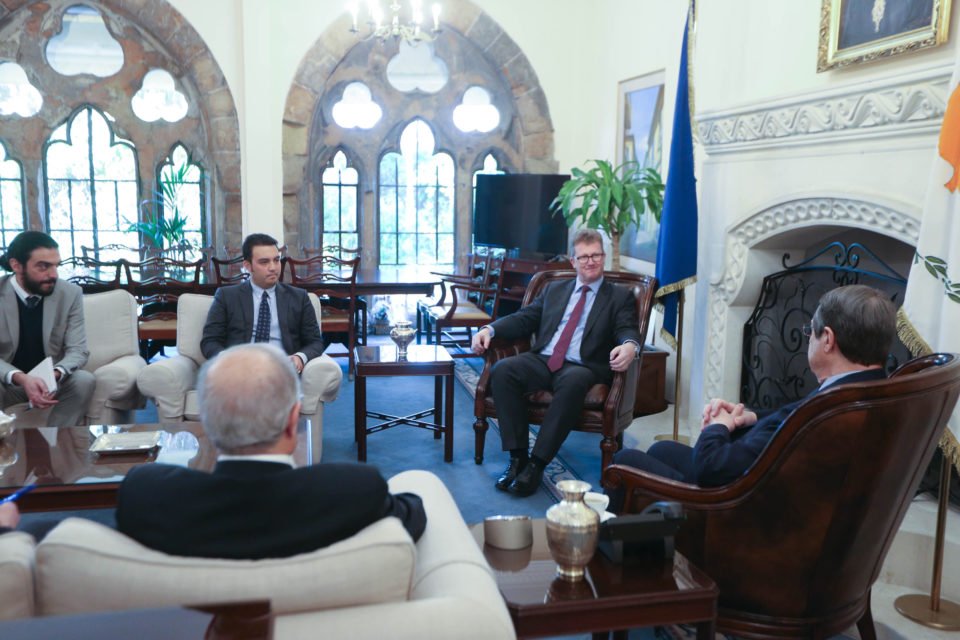 President Nicos Anastasiades is to receive British High Commissioner Stephen Lillie on Wednesday, as opposition parties lambasted London for its “undermining” role after the British diplomat voiced support for a decentralised federation as a solution to the Cyprus problem.

The meeting was scheduled on the latter’s request, reports said on Monday.

Lillie’s statements that the UK was proposing the sides work towards a decentralised federation stirred reactions among the opposition with Akel asking “who authorised Britain to submit new ideas and proposals?”

In an interview with daily Kathimerini published on Sunday, the British diplomat said that attempts to resume the procedure on the Cyprus problem from where it left off in Crans-Montana in 2017, would be a recipe for long and fruitless discussions. He suggested that the parties could build on the body of work done to get to the Crans-Montana talks, as well as the six-point framework of the UN secretary-general.

Lillie called for flexibility and creativity, arguing it was necessary to focus on the difficult points that contributed to the failure at Crans-Montana, namely security and guarantees, as well as the detailed model of power-sharing.

Referring to the decentralised federation idea, which was also proposed by Anastasiades himself in the past, Lillie said it needs further discussion because it would allow the two communities a high degree of autonomy in relation to their daily affairs and would maintain Cyprus as an internationally recognised, sovereign state.

He said he believed this was a good balance between the Greek Cypriots’ need for the evolution of the Republic of Cyprus, which was founded in 1960, and the desire of the Turkish Cypriots to have control over most of their internal affairs.

Referring to reactions by some political circles in Cyprus against the UK, Lillie said London was not promoting a confederation. He said such a thing would mean a union between two sovereign states, a two-state solution and was therefore out of context for Cyprus. The decentralised federation remains a federation, which means a single internationally recognised personality, Lillie said.

Commenting on the interview, government spokesman Marios Pelekanos said this was “not the first time or the last that some proposals will be put on the table.”

He told state broadcaster CyBC said the Greek Cypriot side “has made clear in every direction its positions and the common ground that exists for the resumption of negotiations.” He added that there was a clear framework for the solution of the Cyprus problem, which is what is provided by international law and Security Council resolutions.

On Monday, main opposition Akel said the “new ideas” pitched by the British “are old and dangerous, as they refer to a succession state, not to mention a confederation, they undermine the decades-old negotiating acquis, approach the Turkey-Tatar partitionist claims and undermine the prospect of a solution and reunification of our homeland.” The party said it rejects these ideas and called on the government to do the same.

Akel said it insists that the talks ought to resume from where they left off in Crans-Montana because, as everyone admits, the sides were just a step before a solution to the Cyprus problem.

Edek leader Marinos Sizopoulos said, once more, Britain’s “undermining role” at the expense of the Republic was confirmed as it attempts to secure sovereign equality as a political acquis for the occupying regime. He said he has already proposed to the president to take initiative to end Britain’s leading role at the UN as regards shaping decisions, resolutions, and the reports on the Cyprus problem. The UK is the penholder on Cyprus at the Security Council.

Sizopoulos also said he has asked Anastasiades to launch a procedure for the removal of the British Bases from the island, since their presence was “illegal, unconstitutional and lacks legitimacy.”

Dipa said it was “political naivety for some to believe that the introduction, especially by the British, of new ideas on the Cyprus issue, which go beyond the agreed basis of negotiation, will not ultimately lead to a confederation solution or a two-state solution.”