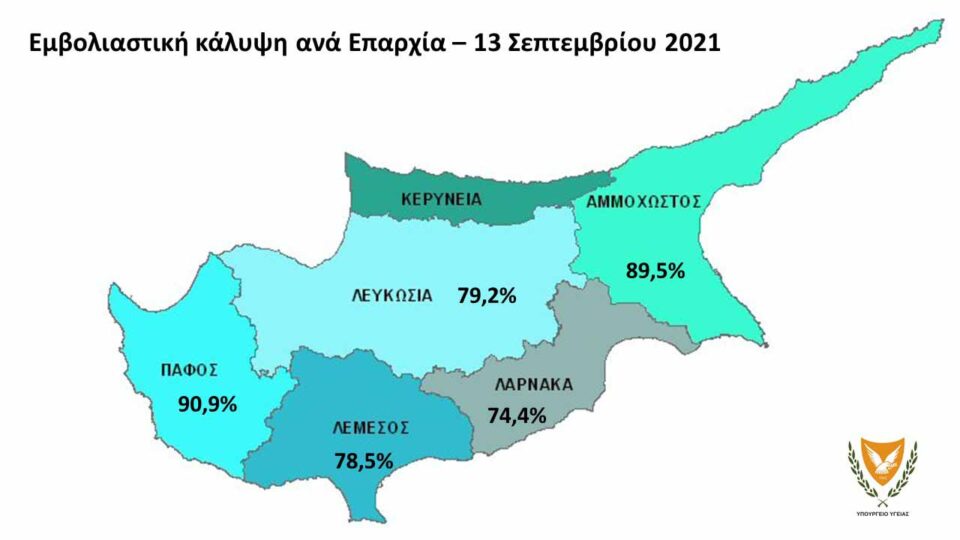 Eighty per cent of the adult population had received at least the first dose of a Covid vaccine, the health ministry said on Tuesday.

Data showed that 80 per cent of adults had received the first dose while 76 per cent completed their vaccination.

In the next two to three weeks, the percentage of fully vaccinated will reach 80 per cent, he said.

“Thanks to the positive response and the overwhelming responsibility of our fellow citizens, we have won another battle in the war against the coronavirus pandemic,” he said.

Hadjipantelas noted that Cyprus was among the countries with the highest percentage of vaccination in the EU and said he is optimistic about the future of the vaccination rollout scheme.

“The high rate of vaccination fills us with satisfaction and allows us to be optimistic, in view of the winter season, that we will find ourselves in a position of greater safety and protection from the virus that has plagued humanity for the last 20 months,” he added.

Around three months after the extension of the national vaccination scheme to those under 18, some 39.6 per cent of 16 and 17-year-olds have received at least one dose, while another 32.5 per cent were fully vaccinated.

For children aged 12 to 15, the vaccination percentage stands at 24.1 per cent with the first dose between August 2 and September 13.

Vaccination coverage rose across all age groups since the last report on September 11.

For young adults aged 18 to 19, the vaccination percentage stands at 50.5 per cent.

By district, Larnaca has the lowest vaccination coverage with 74.4 per cent of its eligible population having received at least one dose, while Paphos maintains first place with 90.9 per cent.

The second highest vaccination percentage is in Famagusta with 89.5 per cent, followed by Nicosia and Limassol with 79.2 and 78.5 per cent respectively.

Meanwhile, the country has already carried out 1,421 administer booster mRNA shots to the elderly and vulnerable groups.

Despite the high vaccination coverage and the government reaching its target of 80 per cent, Hadjipantelias said that the effort was continuing and intensifying.

“The higher the vaccine coverage, the closer we will get to our goal of ensuring that the economy and society are stable and that we do not again experience severe restrictive measures,” he said.

“The vaccine weapon given to us by the scientific community is our shield to reduce the negative effects that the disease has on our health, psychology, economy and social life.”