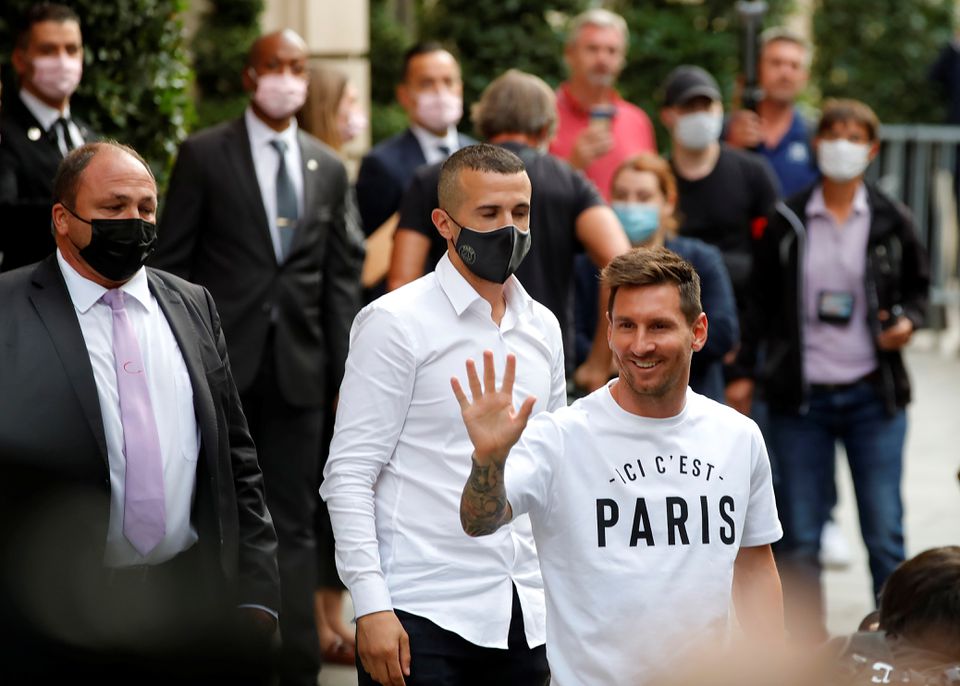 For Paris photographer Olivier Sanchez, there is only one story in town: the new life of Lionel Messi.

Newspapers and magazines around the world harangue his Crystal Pictures agency for images of the Argentine footballer, his wife and children settling into the French capital a month after arriving.

“Today, for me, it is Messi and no one else,” he said. “Everybody wants a piece of him. He is king. Simple.”

PSG agreed a staggering net salary of 71 million euros ($84 million) over two years, according to media, but club chairman Nasser al-Khelaifi said bluntly that people would be “shocked” by the revenue he would fetch.

The money train extends far beyond the club.

Sanchez said he had at least two photographers collecting tips and following Messi and PSG for the first shots of the family when they finally break cover from their hotel.

In Barcelona, he won the admiration of locals for his down-to-earth lifestyle, waving at neighbours, enjoying seafront meals and taking his children to bouncy castles.

“If we can get them in a park, or strolling in town, or out at Disneyland Paris, the newspapers will lap it up,” Sanchez said.

Luxury real estate agent Susie Hollands, meanwhile, is scouring the market for a property worthy of a man listed by Forbes as the world’s second highest-paid athlete in 2021. Hollands, founder of boutique real estate group Vingt Paris, has collaborated with PSG before and is familiar with players’ demands.

“Typically, they’re going to want 1,000 square metres – that barely exists in central Paris – and parking for their cars,” Hollands said.

“We’re taking a look to see if we can find something. But you either have it or you don’t,” Hollands said, adding that she was one of a select group of agents the club worked with.

For several years after the Emir of Qatar bought PSG in 2011, Yves Abitbol’s concierge company helped settle some of its highest-profile players, organising the house hunt, dealing with banking and insurance paperwork, and finding house staff.

Sometimes he catered for a player’s fancier needs, including visits to sports car dealerships and luxury watch boutiques.

Abitbol said his firm MyConcierge had worked closely with PSG until it created its own internal team several years ago, cutting the likes of him out.

Nonetheless, Abitbol’s upmarket travel agency has seen a Messi bounce. “I’ve got people around the world asking us to organise three days in Paris with seats for match day to watch Messi,” he said.

The red-hot demand to see Messi in person – even when he was just watching from the stands rather than playing – saw tickets for PSG’s first game after his signing, at home to Strasbourg, sell secondhand for over 800 euros.

On Wednesday night, he was set to join fellow superstars Neymar and Kylian Mbappe in a frightening attacking trio away to Brugge in the Champions League.

His number 30 jersey, which retails at 108 euros, has sold faster than any other, PSG said. Activity tracker Talkwalker said that from the Friday Messi was first linked to the club in early August to the following Tuesday when he signed, PSG gained 3 million followers across social media platforms.

Again, the club was not alone

“We saw a jump on social media,” said Enrique Tirigall, co-founder of Volver, an upmarket Argentine restaurant chain in Paris. Reservations for his flagship steakhouse, a popular haunt for PSG stars including Messi compatriot Angel Di Maria, flooded in after the Argentine sealed his deal.

“Everybody want to eat what he eats,” Tirigall said.