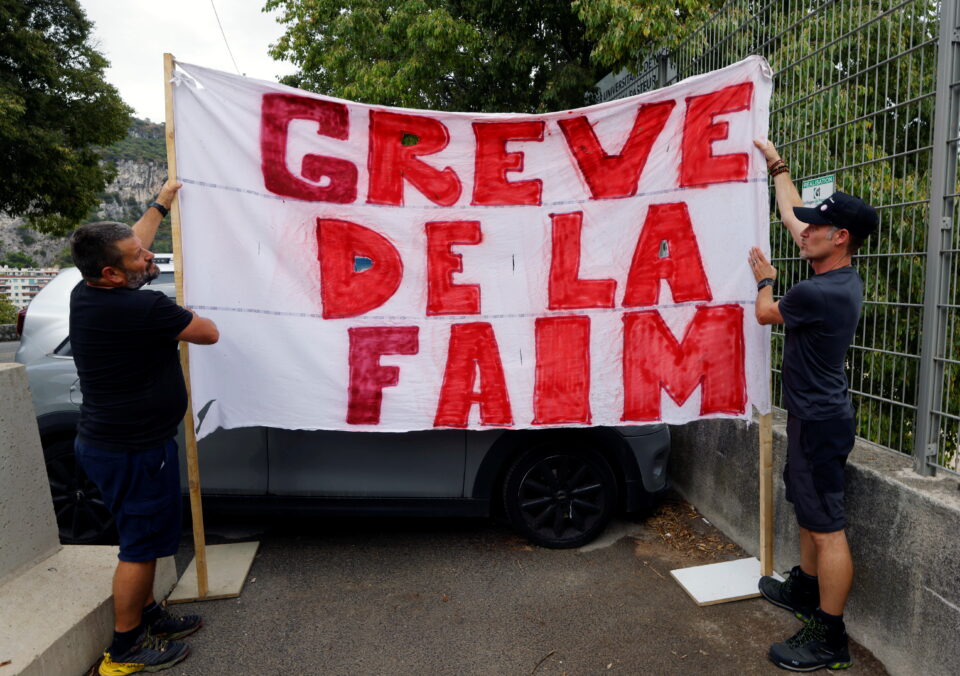 Thierry Paysant, security worker and firefighter at the Pasteur hospital, and Christophe, caregiver at the Pasteur hospital, hold a banner which reads "Hunger strike" to protest against France's restrictions, including compulsory health passes, to fight the coronavirus disease (COVID-19) pandemic, near the Abbaye Saint-Pons in Nice, France, September 15, 2021. Picture taken September 15, 2021. REUTERS/Eric Gaillard

Around 3,000 health workers who have not been vaccinated against COVID-19 have been suspended in France, Health Minister Olivier Veran said on Thursday, a day after the country made vaccination mandatory for all healthcare and care home workers.

President Emmanuel Macron’s government imposed the rule to boost vaccination uptake and help prevent a new wave of infections in the autumn that might jeopardise France’s economic recovery.

“Most of the suspensions are only temporary … many of them have decided to get vaccinated as they see that the vaccination mandate is a reality,” Veran told French RTL radio.

According to local daily Nice Matin, nearly 450 health workers have been suspended in a hospital in the city of Nice, in southern France.

A French hospital worker has said he is on hunger strike to protest against a government rule that healthcare workers will be suspended if they are not vaccinated against COVID-19.

Thierry Paysant, a fire safety officer with the public hospital system in Nice, southern France, has pitched a tent in front of the city’s Saint-Pons abbey, and erected a placard reading “Hunger Strike” in large red letters.

“We will go as far as we are able to go,” Paysant said outside the abbey, where he had also set up a camping stove.

He said he was not against the vaccination itself, but objects to people being forced to get the shot or risk losing their jobs. “It’s hard to swallow,” he said. “It was imposed in a violent way.”

The new rules took effect on Wednesday, as part of a drive by the French government to boost vaccination rates and prevent a new flare-up of COVID-19. Most healthcare workers have complied, public health officials said, but a small percentage have refused to get the shot.

One care home director said he feared staff shortages because some employees had refused to get vaccinated.

Outside the abbey in Nice, Paysant was joined by another man who said he was also on hunger strike.

According to his own social media posts, Paysant has in the past acted as a street medic during protests by the Yellow Vests, a citizens’ movement that has organised demonstrations against the rule of President Emmanuel Macron.

Paysant said he hoped his hunger strike would amplify the voices of ordinary people who are uncomfortable about the vaccine mandates.

“I watch television and I see that people who are against or who express doubts are pushed to one side or dismissed as conspiracy theorists,” he said. “We hope there will be a public debate.”