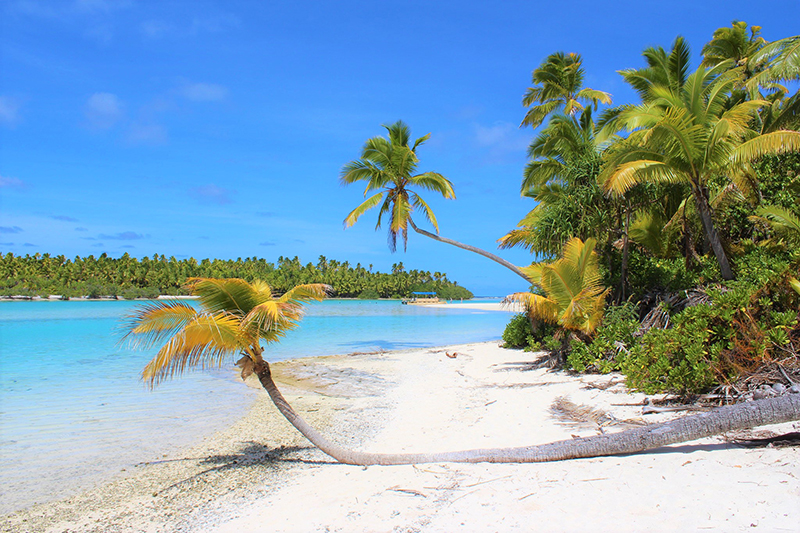 Welcome to the true tropical paradise, a place in which no building may be taller than a coconut palm! Dotted across 1,960,027 square kilometres of azure waters, the Cook Islands comprises 15 verdant isles – each a Pacific jewel. Tourism is the mainstay on this self-governing nation but the Islands are also known for their offshore banking and gorgeous black pearls, which thrive in the warm climate and pollution-free waters.

The Islands are known for their friendly, welcoming people. This is the land of the Ura (similar to the Hula, but far faster); of the joyful ukulele; of pristine beaches, glass-clear lagoons, and luxuriant forest. Even the greeting, ‘kia orana’, is a pleasant entreaty to ‘live long and be healthy’.

Both lifestyle and food are free and easy. Breakfast falls from the tree (seasonal fruit, such as pawpaw drizzled with lime and coconut, is the traditional morning meal); exotic fruit and veg (including breadfruit, banana, cassava, and papaya) abound; and coconut milk is the drink of choice. 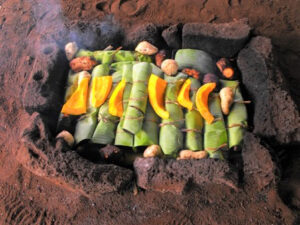 Main dishes often consist of fish, served with bread or rice and vegetables. But the frequent celebrations go one better, thanks to the umu: a traditional meal prepared on special occasions. Named for the hot stone pit in which it’s cooked, this feast might include anything from fish to pork, lamb, or chicken (wrapped in banana leaves and steamed for hours), served alongside pawpaw salad, baked potatoes, and steamed rice.

You’ll also most likely come across minese (a distinctive pink potato salad of diced, boiled potatoes, mixed vegetables, spring onion, lettuce, egg, mayonnaise and beetroot), along with ika mata, a dish of raw fish (local varieties of snapper or cod) and vegetables (such as tomato, coriander and chilli) marinated in lemon juice and coconut cream.

Rukau is another favourite, a traditional Cook Islands dish which honours returning relatives. Named for the taro leaves that are wrapped around the ingredients, it consists of corned beef, onions and coconut cream all in one delicious package. And dessert will be either poke (made from baked, over-ripe bananas covered in coconut cream and sugar), or a Cook Islands doughnut: a deep fried confection that’s a quick and easy snack food.