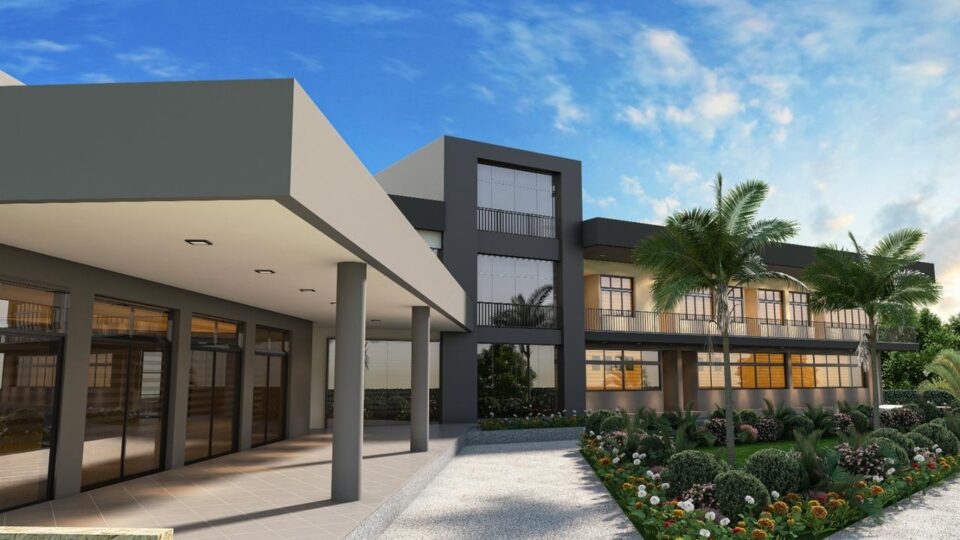 Architect's plan for the new school and cultural centre

Mention Kormakitis and the image that springs to mind is of the tightly knit Maronite community which has defied all attempts down the decades to erase their village in the north from the map.

This famed unity is what has made the division among Maronites over the recent demolition of a not very attractive, 1960s village elementary school building so surprising to outsiders.

It is much more than just an angry spat between villagers.

For those who oppose the move, the demolition was illegal, while the school represented a crucial historical and cultural link to an easier time before the invasion nearly emptied the village. And for those who stayed after 1974, it helped keep them there by providing education for six- to 12-year-olds.

Those who support the demolition say the building was in terrible condition and unsalvageable, and the EU-funded new school and cultural centre for cooperation which will take its place will have a far broader impact.

“This was a tremendously unpleasant development,” coordinator of the group formed to protect the building, George Kassapis, told the Sunday Mail.

He said the move was illegal and the group is taking the case to court seeking the reconstruction of the building.

He said they were aware that EU funding had been secured for the construction of a centre for cooperation in the village but no one knew they were planning on building it on the same plot where the school stood until September 7 when it was demolished.

“They acted as if the school never existed,” Kassapis said.

He said the mere fact that no permit was given for the school’s demolition by cabinet, or any other government authority proves the illegality of this move.

The school was built on land owned by the Maronite Archbishopric of Cyprus.

Representative of the Maronite Religious Group in parliament, Yiannakis Mousa, denies the demolition was illegal and says the old building simply could not have been fixed.

“Everything was done by the book,” Mousa told the Sunday Mail. “The EU would not go ahead with the project if both the government and the Turkish Cypriot administration or the Maronite Archbishopric did not agree.”

Mousa said the new building will operate both as a school and the Kormakitis Centre for Cooperation to promote peaceful coexistence. He said the plan is to organise camping events for the children from all communities to get together. It will be able to host 72 children on camping sessions, with classrooms, dormitories, a dining and conference hall.

“Everything was done according to the law and the support of everyone involved,” Mousa insisted. “We wanted to incorporate the old building, but the team of experts rated it as a public hazard.”

The €1.2m project is fully funded by the EU, while works have already started, he added.

Mousa said the goal was for a preschool and a primary school to start operating from next September. There are now 10 children of that age at the village.

In total 25 children of young families live in the village now, between one and 20 years old. At present, they all have to go to kindergarten, primary, secondary schools, and university in the government-controlled areas. The village primary school stopped operations in 1997.

Kassapis argues that the demolition of the school was not necessary, citing a technical assessment of the building in 2007, which showed that a large part of the building could be repaired.

“That was almost 15 years ago,” Mousa said. He added that a recent assessment by a team of experts on behalf of the EU but also their own engineers all had the same conclusions. “The building was ‘totally lost’, it could not be restored,” he said.

When he assumed his duties in 2016 as the Maronite representative in parliament, he said, “I took over a ruined building.

“We tried to find a way to restore it but since there were no pupils, the education ministry could not help,” he said.

After he reached out to the EU for funding, he said there was a suggestion that the building could operate as a centre for co-existence for future generations and used as a school.

“I explained the idea to the education ministry that embraced it and offered its support,” Mousa said.

The group also raise the question of why the community council did not use the €80,000 that had been approved by the government at the time to repair the school building. They said some of this was drawn in February 2008 for engineer designs and building permits while part of that money was still sitting idle with the current village council. The rest of the money, around €50,000, was still waiting to be claimed, they said.

Mousa said, as far as he is aware, the only money drawn was around €26,000 for the demolition of part of the school at the time, but that was it.

“When I took over there was no other money available,” he said.

For the group, however, the school has been waiting for the right conditions, that would make its renovation and re-operation possible. “Definitely not its demolition,” they said.

They stress the massive sentimental importance of the school to them.

The school, that was operating from 1961 to 1997 when the graduation of the last student remaining in the village at the time took place, “has huge sentimental value to the community and is our historical landmark”, the group said.

They said it enabled many village families to continue living in Kormakitis, instead of having to flee to the government-controlled areas, to secure education for their children aged six to 12. As such, they argued, that school was the most important factor contributing to the survival of the village following the tragic events of 1974.

“I too graduated from that school and so did many others, but what were we to do with a ruined building? This will bring a future and hope to the village,” Mousa said.

According to Mousa, 15 young families have relocated to the village in the past couple of years, as part of a government scheme encouraging the enclaved and Maronites to return to their occupied villages.

If there was no pandemic, he added, more families would have returned to Kormakitis but they were put off due to the restrictions.

He hopes that, in the future, a high school would also operate in Kormakitis.

Mousa also commented on the long delays experienced in the mornings at the Ayios Dhometios crossing by Kormakitis residents who need to cross daily to the government-controlled areas to take their children to school.

“It is a serious issue, we are trying to see what can be done to facilitate their access,” he said. “This is another reason that makes people think twice about relocating to their village.”

Kormakitis is the most populous Maronite village. Its permanent population is around 300. Of the other Maronite villages in the north Karpasha now has 25 residents but no one with young children, while Ayia Marina and Asomatos lie within Turkish military areas and are thus out of bounds.