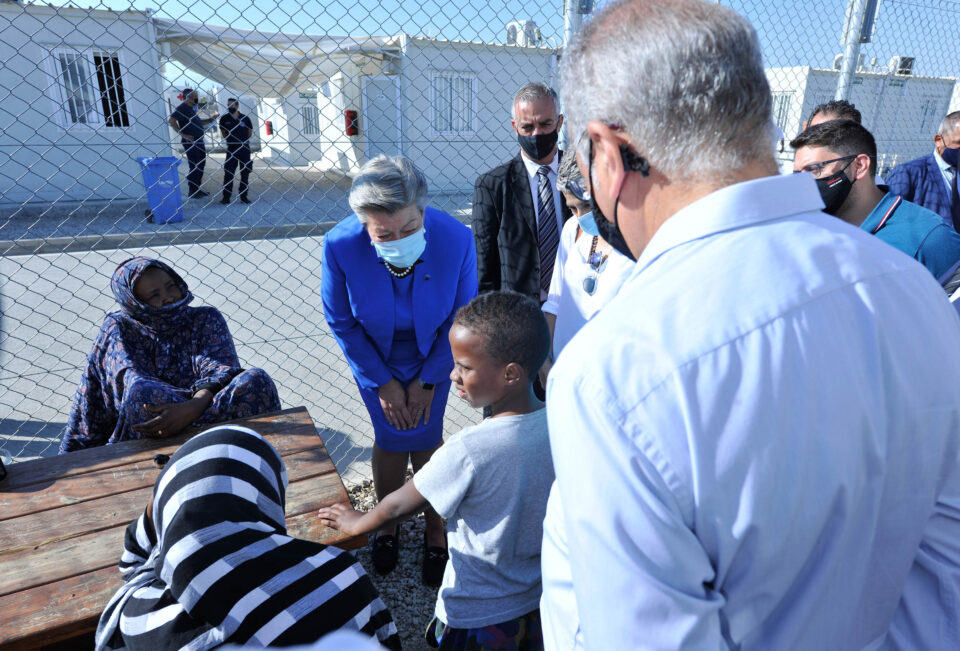 The EU must find a way to stop migrant smugglers, Home Affairs Commissioner Ylva Johansson said on Wednesday as she cited latest figures showing that virtually all migrants to Cyprus rely on criminal rings.

“Yesterday in Cyprus I was briefed by Frontex that 99 per cent of migrants use the smugglers rings, which make large profits,” she said in Brussels.

“These are very well organised rings, and they adapt immediately. We must find a way to stop them,” she said.

Johansson, who visited the Pournara migrant reception centre and held talks with government ministers in Cyprus on Tuesday, was speaking at a joint press conference with vice president Margaritis Schinis on the commission’s report on migration and asylum.

The report was submitted a year from the adoption of the proposal for a New Pact on Migration and Asylum.

According to an EU press release, the commission is also adopting a renewed EU action plan against migrant smuggling.

These initiatives aim to prevent organised exploitation of migrants and reduce irregular migration, in coherence with the New Pact’s aim to promote sustainable and orderly management of migration, it said.

The initiatives will address both persistent challenges in dismantling organised criminal groups, as well as the need to adapt to new challenges including state-sponsored migrant smuggling, in response to the situation at the EU’s external borders with Belarus.

Johansson told reporters that there has been dramatic drop in asylum applications overall, something she attributed partially to flight cancellations. She said 90 per cent of irregular migrants come by sea and anticipated a small increase in numbers would follow a drop in arrivals because of the pandemic.

Some states are under more pressure than others, she said, giving Italy – which has seen increased arrivals from Tunisia and Turkey — and Cyprus as examples.

“Cyprus is a small island, a small country and has also seen an increase in irregular arrivals mainly across the green line,” she said.

Her comments came a day after Interior Minister Nicos Nouris told a joint press conference with the commissioner that the biggest problem Cyprus faces as regards migratory flows is inability to exercise effective control of the green line. The particularities Cyprus faces require additional support and assistance from the European Commission, he added.

At the Brussels press conference, Johansson also referred to increased arrivals from African countries via dangerous routes in the Atlantic and the west Balkans, a small increase in Bulgaria, a small drop in Greece and a steep rise in the Baltics and Poland.

She and Schinas noted that a year since the new pact was submitted progress was painfully slow while challenges continue.

They also announced that the commission was proposing visa restrictions for Belarus officials and diplomats as part of measures against the Lukashenko regime for instrumentalising migrant flows.

Asked whether similar sanctions could be imposed for Turkey on the same grounds, Schinas said that the message being sent was that everyone has to gain from working with Europe and this applies to Turkey.

“Today’s decision is a targeted measure against Minsk’s tactics which systematically instrumentalises flows to the EU,” he said adding that there was a range of tools that he hoped would not be needed. He added that he was optimistic that solutions could be found with Turkey and Morocco.

As regards Cyprus, the report says, 2021 has seen a rise in arrivals of some 47 per cent.

“In Cyprus, to date in 2021, 6026 arrivals were reported at the government-controlled areas, 5413 after having crossed the Green Line and 613 directly by boat, compared to approximately 4100 arrivals through the Green Line and by boat in the same period last year, where 5 400 arrivals were recorded via the Green line and 496 by boat directly to Cyprus government-controlled areas, from either Lebanon, Syria or Turkey (334 from Turkey),” the report added.

Our View: No justification for strike action by doctors

Hopefully, the above information has clarified things for you. As it was previously mentioned, if you are not sure whether you want to allow the cookies or not, it is usually safer to leave cookies enabled in case it interacts with one of the features you use on our Site. However, if you are still looking for more information, then feel free to contact us via email at [email protected]com