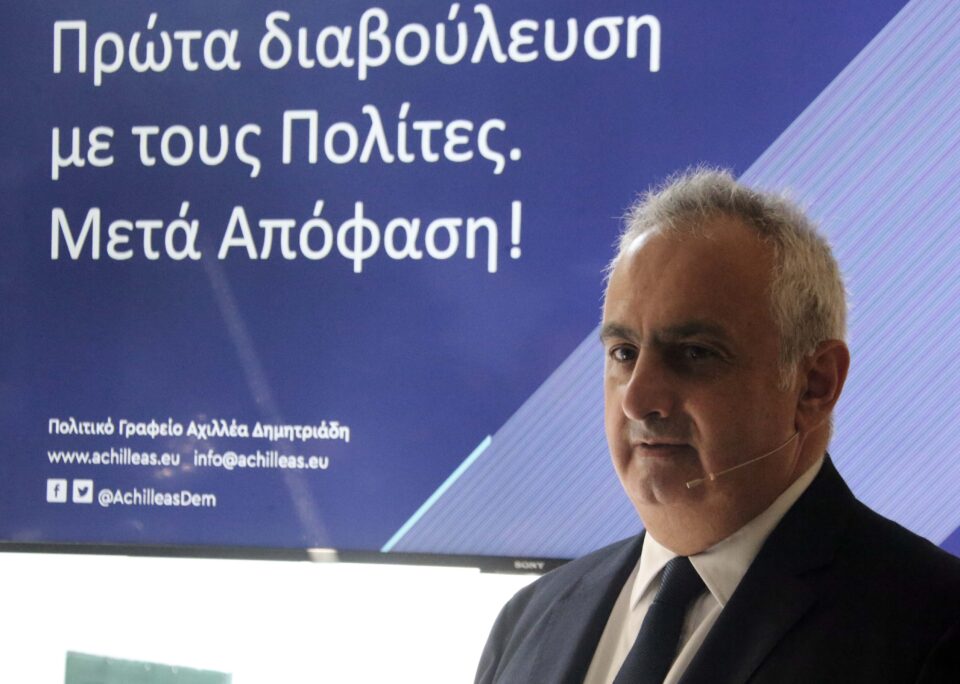 Prominent lawyer Achilleas Demetriades announced on Thursday he would launch consultations with political parties and civil society groups to assess their views on the problems facing the country before he decides whether to run for president in 2023.

Demetriades said these consultations would start from Monday and last until the end of the year and what he learns will determine whether he makes a presidential bid.

“I have my ideas, I want to hear what people want,” Demetriades said at a press conference to present an outline of his political positions on key issues in Cyprus.

The consultation, following the ‘I listen – I consult – We decide’, format, is addressed to the public, the political representatives, local self-government, and anyone else who wants to share their views.

Demetriades explained his vision for an ‘honest state’, of where the country should be by 2035 and – of course – the Cyprus problem.

To achieve this ‘honest state, it was imperative he said to end the lack of transparency, lack of accountability, mismanagement and corruption.

“An honest state is our right,” Demetriades said. He also referred to equal access to opportunities, which includes closing the circle of unfair privileges, multiple pensions, and the pay gap.

He also outlined his vision for Cyprus in 2035.

“We need a vision for the future and not remain stuck in the past,” Demetriades said. “We need now the strategy that will make us in 2035 – 75 years since Independence – a modern state, aligned with the highest levels of EU development in the areas of security, prosperity, democracy and human rights,” he added.

He also spoke about ‘One, Green Cyprus’ noting that the country is far behind the rest of the EU. Cyprus must, from being at among the last, become a leading actor by embracing the European Green Deal. These set of proposals, adopted by the European Commission, seek to make the EU’s climate, energy, transport and taxation policies fit for reducing net greenhouse gas emissions by at least 55 per cent by 2030, compared to 1990 levels. Turning to renewable energy sources is also part of this strategy.

On the Cyprus problem, Demetriades said “a solution is in our interest”.

He said he was in favour of a bizonal, bicommunal federation with political equality as set by the Security Council resolutions. The solution, he added, ought to be based on the six points of the Guterres Framework after “cross negotiations”. He explained that each point should be not be negotiated separately as was the case so far.

“The solution of the Cyprus problem is in our interest because after half a century it will provide a united common homeland for all Cypriots, without occupying troops, by utilising all its people, its wealth-producing resources and its geographical position,” he said.

“Our shield is in our alliance with the EU. The Euro-Turkish relationship goes through the resolution of the Cyprus issue.”

Demetriades added that the EU should be invited to play a bigger role in the Cyprus issue.

“Our shield is in our alliance with the EU,” he said, adding that the Euro-Turkish relationship goes through the resolution of the Cyprus issue.

He also spoke of setting up a ‘Truth Committee’, similar to Nelson Mandela’s South Africa model.

Another proposal is a European ‘Peace Plan’ supporting all EU initiatives for the solution but also supporting the Greek Cypriot and Turkish Cypriot communities. He said that this proposal includes the appointment by the EU of a representative at the talks.

Until a solution is achieved, Demetriades said the government ought to move closer to the Turkish Cypriots, treat them as equals and find ways to help prevent their further dependence on Turkey.

Russia to host first royal wedding in more than a century