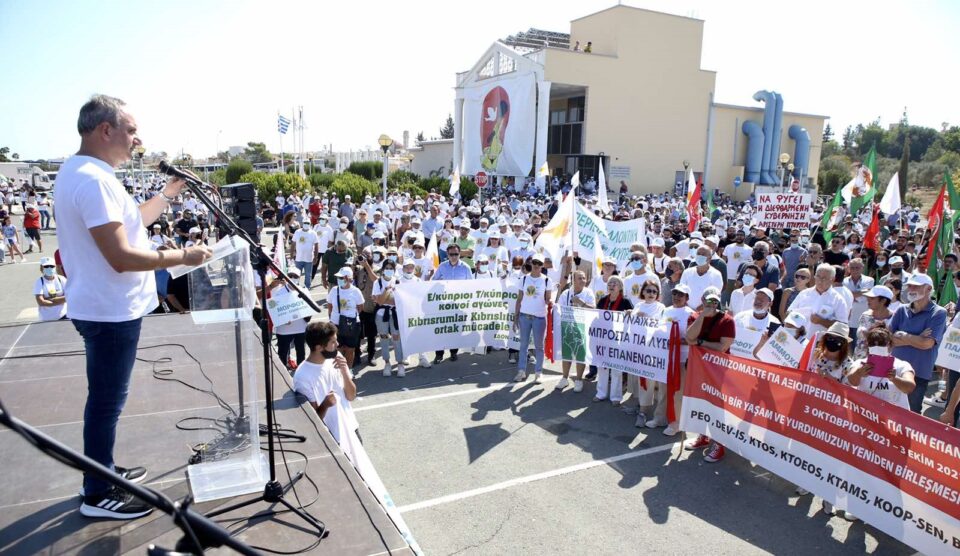 The Cyprus problem is at its worst phase, Akel leader Stefanos Stefanou said on Sunday at the bicommunal event the party organised in Dherynia for the reunification of the island.

People from both sides of the divide marched in the morning to the Dherynia crossing in support of a federal solution to the Cyprus problem and the island’s reunification.

An event was also held at the Famagusta municipality’s cultural centre in Dherynia.

In his address, Stefanou said the Cyprus issue is in its worst phase, “a nightmarish reality” caused by the prolonged impasse and the negotiation void but also the insistence by Turkey and the Turkish Cypriot leadership for a two-state solution, the illegal opening of part of the fenced area of Famagusta and the creation of new faits accomplis there.

He also said that the difficulty of the UN to issue a tripartite announcement after the two leaders’ New York informal meeting earlier this week, on the appointment of a UN special envoy, reflects the magnitude of the stalemate.

Stefanou reiterated that the Greek Cypriot side ought to insist on the restart of the talks from where they left off in Crans-Montana in 2017 based on the Guterres Framework, and by safeguarding all convergences reached so far.

“This has also been the position of the UN secretary-general for four years. This is the common ground that is being sought today. If we do not insist on this position, the impasse will simply intensify, given the great differences that exist between the two sides,” Stefanou said.

He also said the president’s policy on the Cyprus problem allows Turkey to promote the island’s partition without any political cost for Ankara and allows third parties promote ‘new ideas’, thus derailing the solution towards a confederation.

Present was also German MEP Martin Schirdewan, co-chair of The Left in the European Parliament (GUE/NGL).

Schirdewan said this was a significant day for all those who believe in a future of peace, where all communities on the island will be building together the country they want their children to gown up in and prosper. He also said he sensed the participants’ determination for a solution and reunification, a message he would convey to the EU parliament.

The MEP said a permanent partition of the island would be an unacceptable solution to the EU.

Head of Turkish Cypriot Dev-Is union Koral Asham, spoke on behalf of ‘This homeland is ours’ platform, which, he said, was the biggest platform in the north that carries on with this joint struggle. Asham said both leaders are now presenting as “new and creative” their solution ideas that are, however, outside the UN parameters. He also said Varosha should not be turned into an issue preventing the solution but a confidence-building one through the implementation of UN resolutions 550 and 789.

Former President Giorgos Vasiliou also attended the event that was backed by more than 100 parties, trade unions, groups and associations from both sides of the divide and abroad.

Squeezing the cars off the roads

Government has given green light for Spehar’s replacement – reports