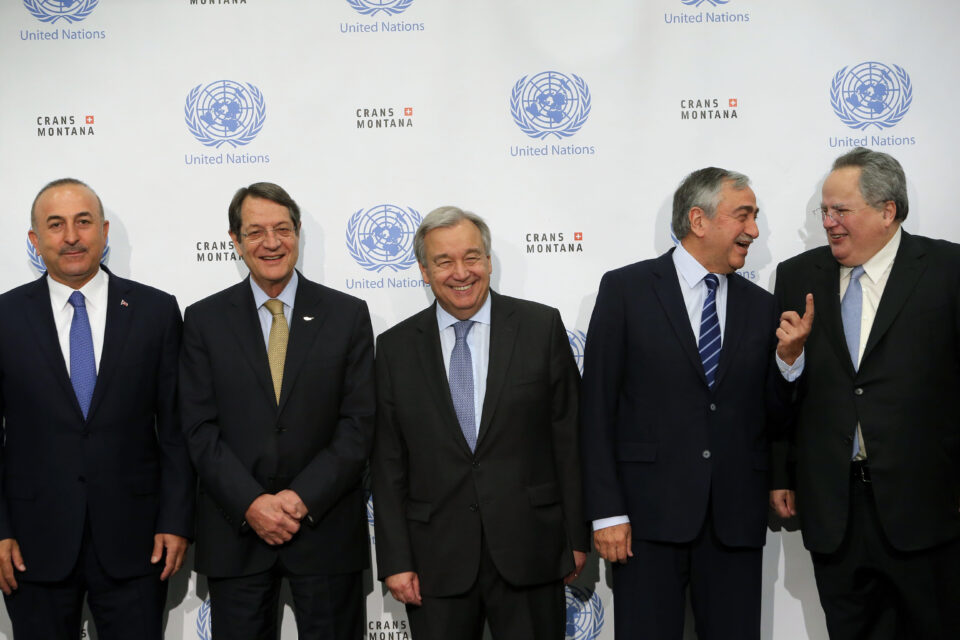 The leaders in Crans Montana

The Greek Cypriots have two options over their political future

A friend and classmate of mine recently sent me an article by Michael Rubin, an American columnist, entitled “Turkey is committing cultural genocide in Cyprus”. The gist of the article is the author’s findings that the Turkish president, Recep Tayyip Erdoğan, is systematically pursuing a campaign of ethnic and sectarian cleansing aimed at the turkification of northern Cyprus.

Having secured the physical segregation of the Turkish Cypriots, he is proceeding now with the colonisation of northern Cyprus with settlers arriving from Turkey (who probably already outnumber the native Turkish Cypriots). Simultaneously, he is exerting pressure on the Turkish Cypriots to abandon their moderate Muslim views and embrace the positions of the Muslim Brotherhood, which he himself endorses. Turkey’s current goal is two sovereign states with some sort of confederation which will allow the joint presence of Cyprus in the European Union.

The recent replacement of the moderate chief mufti of the Muslim community in Cyprus with a new one from Turkey, whose religious views are in full harmony with the Turkish president’s, is a move that is fully aligned with the above spirit.

These developments, which intensified after the collapse of the Crans-Montana talks in 2017, are of course visible to the naked eye of any Greek Cypriot who visits northern Cyprus. Indeed, a visitor who sets foot there needs no help from any foreign columnist to assimilate the harsh, brutal reality that turkification is progressing quickly and is gradually becoming irreversible.

Unfortunately, this process neither entails nor requires the consent of the Greek Cypriot community, which forms 80 per cent of the indigenous population. It is accomplished with the passage of time, and it is facilitated by the proven inability of the Greek Cypriot leaders to draw up a clear and effective strategic plan for the reunification of Cyprus which convinces the international community that they are ready to accept the Turkish Cypriot community as political equals having effective participation in governance. This is, indeed, the narrative of Turkey and of the present Turkish Cypriot administration: “Since the Greek Cypriots do not accept the political equality and the effective participation of the Turkish Cypriots in the governance of Cyprus, then there is no choice other than that of the two-sovereign states.”.

In the period following the 2018 re-election of Nicos Anastasiades, this Turkish claim appears to have been fuelled, by the president’s “exploratory references” in private discussions to a two-state solution, as well as by various “creative thoughts and ideas”, such as the “loose” or “decentralised” federation. Then there was the proposal to limit the one positive vote of Turkish Cypriots to the level of the federal cabinet and only on issues that affect them which explicitly excluded the exploitation of hydrocarbons, the abstract proposal to convert the Republic from a presidential into a parliamentary model, and the “return” to the original provisions of the 1960 constitution. In the opinion of the president such new “creative ideas” could get us out of the impasse.

The prevailing confusion within the Greek Cypriot side is exacerbated by the voices of Diko, Edek and Elam, who insist on imposing painful sanctions on Turkey and the Turkish Cypriots, to the point of forcing them to retreat. This insistence is strange because it has been proven that small Cyprus does not have the ability to impose such sanctions. On the contrary; the totally unsuccessful efforts made in this direction have contributed to the shifting of the positions of the Turkish Cypriot leadership (which is currently controlled by Turkey) from that of supporting ‘a bizonal, bicommunal federation with political equality and effective participation to that of a two–sovereign states arrangement’ (a confederation), which is certain to facilitate and strengthen the leverage of Turkey over Cyprus and – in the long run – will lead to the annexation of the entire island.

Given the above, what options does the Greek Cypriot community have? There are two:

I would like to make it clear that I am not in favour of the second alternative, but, since it appears that some of the smaller parliamentary parties (Edek, Elam and, perhaps, Diko), as well as the president are flirting with this possibility or similar arrangements, I believe that they have a strict obligation to make their choices absolutely clear and to justify them adequately. It is, of course, understood that the parliamentary parties that support the first alternative must do something similar.

We often hear that it is of the utmost importance to attain a high level of unanimity and unity amongst the Greek Cypriot political forces because what is at stake is the very existence of our homeland.

With all due respect, I find the argument that ‘united we can perform miracles’ rather hollow, because it implies a naïve (and irresponsible) implication: the silencing of justified and substantiated disagreements. All citizens have the right to make their own assessments as to what stand they should take on a matter of the utmost national importance.

At the same time, every politician (and especially those who form part of the structured parliamentary parties) have an obligation to present their views and assessments, in a clear and unequivocal manner, free of “creative interpretations” (such as the ‘Yes to BBF but with the correct content’) so that the voters can take a responsible stand on the great dilemmas they face. There is no doubt that parliamentary parties have an obligation to formulate and shape their positions in a way that serves the national interest and not the narrower interests of individual parties. This includes seeking and securing convergences and alliances on the political fate of the country, between the two largest political parties.

The next few months are crucial for the political future of Cyprus. Everyone must set aside personal ambitions and rise to the occasion.