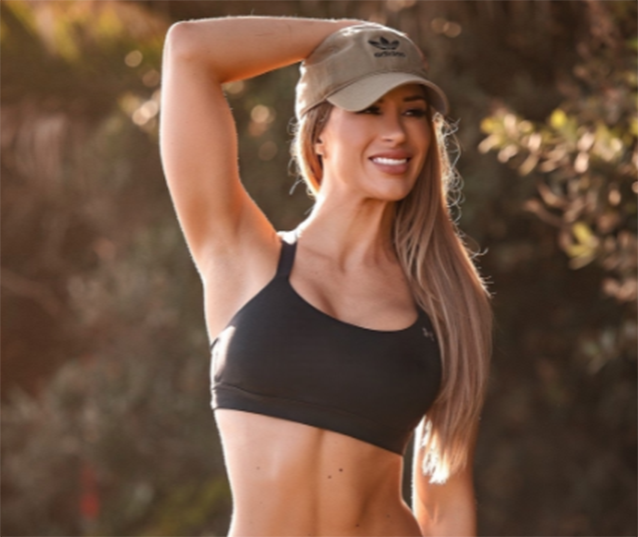 There are many stars in the fitness industry, which is blowing up on Instagram in particular at the moment, including: Kayla Itsines, Julia Gilas and Jen Selter. But these are all household, established names by this point; Taylor Spadaccino is the fitness influencer you might not have heard of yet, but almost certainly will as the future nears. She is the industry’s rising star.

Spadaccino is pushing the boundaries of what should be expected of these influencers, the previous requisites for whom were merely being pretty and slim. As a veteran of the United States Marine Corps (USMC) and ex-professional IFBB bodybuilder, she brings formerly unseen depth to the fitness scene; a group usually characterised by blatantly pursuing solely their own financial interests through the platform of Instagram. It is unsurprising then, that Spadaccino is rising in the industry, and has already gained over 750,000 followers.

An unorthodox entry to the industry

One of the primary reasons Spadaccino has been gifted with such success in the industry is because of her uniqueness in comparison to the other content creators of the sphere. Whilst her fellow influencers all appear to be homogenous and cut from the same cloth, Spadaccino is set apart by her eccentric, yet oddly relatable, background and possession of ideals and goals that extend beyond lining her own pockets to benefiting as many people as possible.

Spadaccino joined the military straight after High School and served an extensive four-year term with them, this also included a seven-month tour in Afghanistan as part of Operation Enduring Freedom (OEF). This is said to be the origin of her career in fitness, as Taylor herself describes herself before the experience as “a little weakling” who “couldn’t even do a pullup”.

As a result of a need to fill her spare time with something whilst away at war, and a lack of activities to choose from, Spadaccino decided to start lifting weights when she realised she quite enjoyed it. When she eventually returned home from the USMC to study for a bachelor in accounting in 2014, she had developed a budding passion for the sport and its ability to completely reshape a person’s life – as it did hers.

Interests extending beyond the monetary

Soon after returning home, Spadaccino’s passion further developed when she decided she wanted to pursue a professional bodybuilding card with the International Federation of Bodybuilding and Fitness (IFBB), a card she later achieved in 2016 whilst she was studying for her degree.

Upon later realising this was not her true passion, Spadaccino decided to shift towards the world of Instagram influencing in the hope that she could share her love of the sport with her followers and help them to improve their lives in the same way she improved hers with it.

This is the paramount reason for her rise through the industry.

Her followers have gathered in flocks to magnify her rise, not only because of her unique history, but the unique messages that she advocates. She is infamous for her “strong women are sexy” message and frequently encourages women to pursue weightlifting as a means to uplift themselves and improve not only their health, but self-esteem too.

Moreover, unlike the clear money-grabbing posts of her counterparts, Spadaccino’s posts actually spread tangible, positive benefits; by motivating people to engage in exercise more, more people will reap the unequivocal benefits of it. Intensive physical activity, such as bodybuilding, is known to promote a number of benefits, including: improved heart health, reduced arthritis, stress relief and confidence boost.

Taylor spreads each of these benefits with each post, unlike her counterparts, who so blatantly are only interested in their followers for the money they can provide them with. This is why she will continue to experience the great growth she has seen up until now, and will likely be the face of the industry soon enough.

Taylor Spadaccino is an incredible young woman who is rising quickly in the fitness industry. The enormous growth she has experienced on Instagram can only be credited to her solid work ethic and individuality, both in background and ethos. Her followers genuinely feel connected to her, which is why her growth will not stop here.