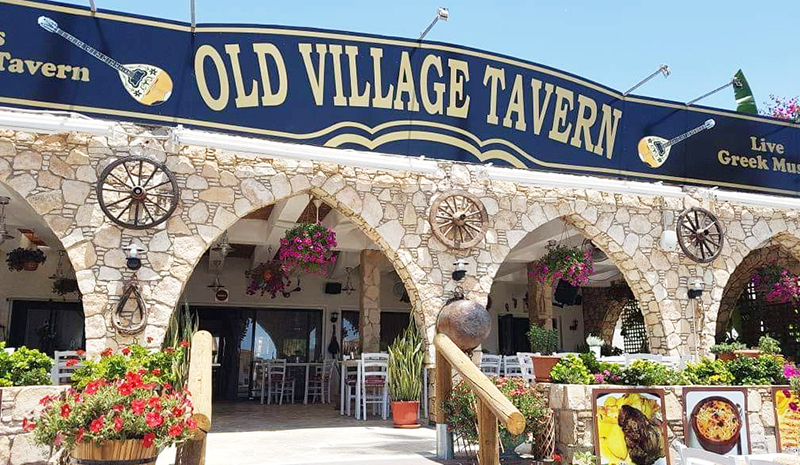 Ayia Napa is usually associated with rowdy tourists, clubs, alcohol and partying. However, there is more to the town than that. In addition to arguably some of the beaches on the island, there are some great places to eat that have kept in line with Cypriot culture while maintaining reasonable prices so locals don’t feel like they are being ripped off in a tourist area.

One such place is the Old Village Tavern. On the outskirts of Ayia Napa, it is a great pit stop on your way in before you reach the hustle and bustle of busy Napa. Similarly, its location means that you don’t actually have to go through the busy areas if all you’re after is dinner.

It’s difficult to miss The Old Village Tavern due to their huge sign. The exterior of the restaurant is beautiful with stone built arches and wooden carriage wheels sitting between each arch. The arches have hanging bright pink bougainvillea. The stonework really did remind me of a traditional taverna. The old village vibe doesn’t just end with the stonework, there is an old style phone booth with an antique phone inside, a perfect photo opportunity!

Top of the menu, you’ll see their offer of authentic Cyprus meze or a fish meze. However, if you want the meat but are not really fussed about all the dips and side dishes that come with a meze, there is a huge meat platter for two. There are also Cyprus specialities such as mousakka, kleftico and afelia, to name but a few, in addition to sections for seafood, vegetarians, salads, soup and pizza.

I was tempted by the grilled calamari but I prefer to order fish from a fish restaurant. So, wanting to try a bit of everything they had to offer, we opted for the authentic Cypriot meze, accompanying it with a bottle of wine. There is a selection of various wines, but being in a traditional taverna, it was only fitting to order a bottle of local xynisteri.

The service was fast! Not long after we placed our order, the food came flying out of the kitchen! Bread, dips and salad came out first. It’s so tempting but I try to pace myself for what is about to come! So many different dishes were brought to the table. Kleftiko, pastourmas, egg with courgettes, pourgouri to name but a few. For me though, the main event was the meat. The chicken and pork souvlakia were cooked just right. The sheftalies perfectly seasoned and the bacon pieces were juicy and oozing with flavour.

While at the taverna, as promised on the sign out front, we had the pleasure of listening to some live music. And, as if that wasn’t enough, to complete the whole experience there was also some plate smashing! The old tavern actually has an option to buy some plates for smashing! Perfect if you need some stress relief!

After dinner, we glanced at the dessert menu more out of interest than anything else. The saying goes ‘there’s always room for dessert’ however, that day, there definitely wasn’t. Naturally, traditional baklava was on the menu. Other desserts included cheesecake, lava cake and Nutella cake.

When we asked for the bill, it arrived with two glasses of commandaria. A small gesture from the restaurant but it made me very happy.

I really enjoyed our experience at The Old Village Tavern and wouldn’t hesitate to recommend it to anyone venturing in to Ayia Napa.