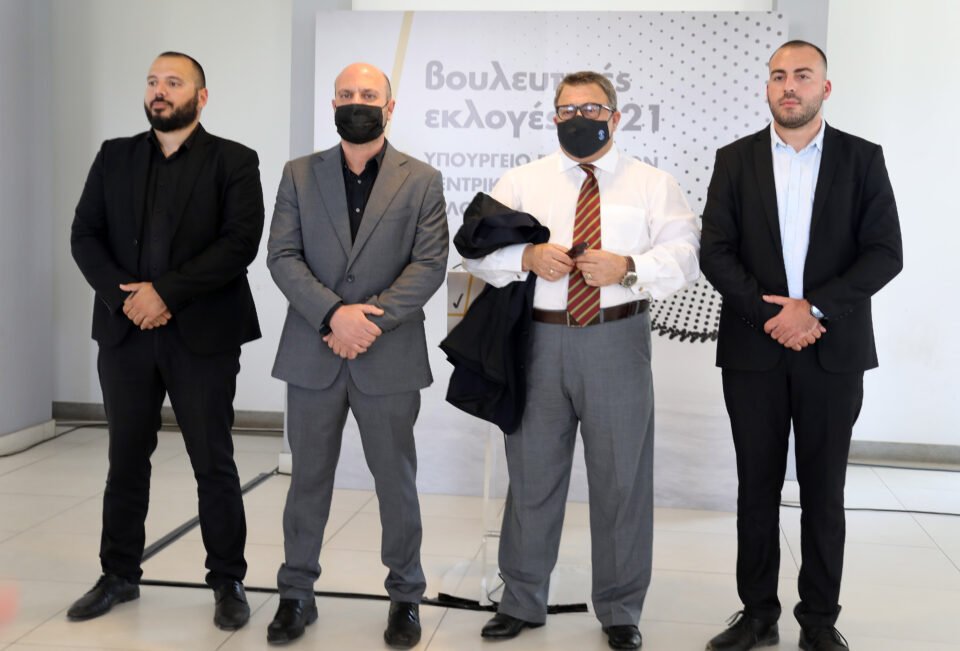 Themistocleous (second right) and other Elam officials during parliamentary elections

Controversial MP Adreas Themistocleous said Tuesday he will not be giving up his seat after his expulsion by his party, far-right Elam, claiming that his removal had been decided on the night of the election back in May.

In a news conference in Limassol, Themistocleous said the reasons given by Elam for his expulsion were nothing but pretexts “that even their members do not believe.”

He said he will be working as an independent MP from now on, adding that nothing could force him out.

“The constitution is clear, but if people want party leaders to be able to annul the people’s vote, and they have the willingness to do so, they can submit a bill in parliament for its amendment,” Themistocleous said.

Elam kicked him out earlier this month and has asked him to give up his seat in parliament.

The party said the decision was a result of Themistocleous’ inappropriate behaviour in parliament “despite all the verbal, written, and in-person cautions”.

Themistocleous, Elam said, violated the party code of ethics, which he had agreed to respect.

Under the current system, MPs can leave a party or be expelled without giving up their seat. Should they choose to resign, the seat goes to the runner up of the same party. No by-election is held.

Themistocleous said the main condition for him to accept the party’s proposal to stand as their candidate was Elam’s evolution into a modern party with democratic structures and institutions with elections at district level instead of the leader appointing and sacking party officers.

“This condition was binned, and the president told me I had no say in Elam’s evolution and at the same time he excluded me from participating in his party’s bodies,” the Limassol MP said.

He also said he received a letter on October 4, which, as he claimed, sought to silence him, and essentially turn him into a puppet.

Themistocleous said he rejected the letter, arguing that the rift with Elam was not his fault.

He said his removal had been decided on the night of the election, claiming that Elam only wanted him and other candidates to attract voters so that their “chosen one” was elected.

“The difference is they miscalculated, and I was elected instead of their chosen one.”

Themistocleous, a former ruling Disy MP, said he had to work hard to convince people to vote for him. He said he took all the risk and fought an honourable election battle, adding that he knows each one of the 1,491 people who voted for him.

The MP found himself in hot water last month after Green party parliamentary assistant Efi Xanthou accused him of verbally harassing her during a house education committee.

Xanthou, who is the party’s deputy chairwoman, said Themistocleous moved towards her while shouting at her to get out of the meeting after she put her hand up to respond in the absence of a Greens MP.

After the incident, the parliamentary committee on standards unanimously agreed on September 14 that Themistocleous had a case to answer.

In a separate case at the end of September, Diko MP and chairman of the education committee Pavlos Mylonas censured Themistocleous for constantly interrupting the work of the committee and offending colleagues and guests. The matter was again reported to the committee on standards.

Between 2001 and 2016, when he was MP with Disy, the Supreme Court had lifted his parliamentary immunity to face trial over repeated traffic violations involving speeding.

Bringing the circus to the woods