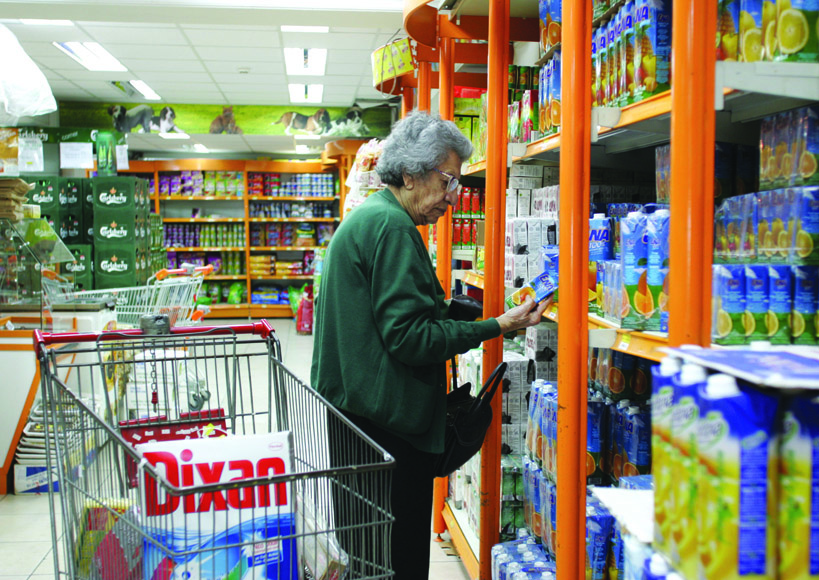 Essential foodstuffs like bread, milk and meat may see a price surge of up to 20 per cent in the coming weeks and months, say industry insiders. Several factors – disrupted supply chains due to Covid-related measures, fuel hikes – have coalesced to form a cascade effect, and no one can hazard a guess as to when the kinks will straighten out.

This past week farmers warned of spiraling costs of animal feed and grains for human consumption. Animal feed has gone up 50 per cent while wheat climbed 30 per cent, impacting the price of bread and pasta. The hikes will have a knock-on effect on milk, cheese, eggs and meat. Bread and pasta are expected to rise 15-20 per cent, cereals 20 per cent, flour 11 per cent, coffee 7 per cent, and LPG gas bottles 10 per cent.

Domestic production of grains was also down this year due to the weather.

Data released by the Statistical Service showed that in September, under the category of ‘housing, water supply, electricity and gas’, prices rose 14 per cent, transport by 11.5 per cent, and food and non-alcoholic beverages 1.47 per cent. Overall inflation was also up in September.

The Union of Cypriot Farmers, an Akel-affiliated syndicate, made much of the shuttering of the state-run Grains Commission. Axed last year, the Grains Commission was the entity negotiating for grain imports and – on paper at least – also ensured best prices. Farmers are now said to be at the mercy of the open market, which has seen prices skyrocket over the past 12 months or so.

“Production costs are up for meat and milk. Unless the situation gets fixed, a tsunami of price increases is on its way,” union head Panicos Hambas told the Sunday Mail.

Andreas Hadjiadamou, general manager of the Cyprus Supermarkets Association (Pasype), said prices of goods have snuck up over the past couple of months, but to date retailers have been able to absorb this – through lower profit margins.

“So far, what with more expensive electricity and fuel, supermarkets have tried not to pass on increased operating costs onto consumers. But now everything’s coming together all at once – the increase in grain, supply chains, and so forth.”

Hambas explained that the Grain Commission had been responsible for maintaining strategic reserves of grain – precisely in the event of contingencies. After the entity was scrapped, a new law was passed this March bringing in a new system for reserves – but lax monitoring by the agriculture ministry let grain merchants off the hook.

“When you’ve got shortages, you throw the reserves into the market to bring down the price temporarily. But now we can’t do that. That’s why the agriculture minister is considering issuing a decree mandating that merchants hold back (don’t sell) 4 per cent of imports.”

He added: “To my recollection, it’s the first time the agriculture minister in Cyprus has done anything like that.”

But with approximately 90 per cent of the grain consisting of imports, it’s doubtful that tapping into strategic reserves would have made much of a difference other than a short-lived reprieve.

Still, Hambas insists Cyprus could have weathered the storm had it stocked up on grains. “But unlike others – like China – we didn’t.”

According to Hadjiadamou, suppliers are telegraphing to retailers to expect costlier deliveries in the coming weeks.

“Though very hard to pinpoint, from the signals we’re getting we expect on average a rise of about 7 to 20 per cent in certain foodstuffs – bread, flour, legumes – and between 3 to 5 per cent on non-essential goods.”

Though not an expert on shipping, Hadjiadamou attributed this to shipping operators gaming the industry.

What of meat? Might the staple kebab pita become a delicacy for some?

Relatively self-sufficient in meat in the past, the island currently imports 20 to 25 per cent.

During the week, and speaking to the Sigma channel, head of the butchers association Costas Livadiotis predicted prices would climb by as much as 20 per cent over the next six months.

Still, for the moment, meat product prices remain stable, in part because a great deal of animals have yet to be slaughtered due to lower than usual demand – fewer tourists over the past year, plus the closure of a number of restaurants due to the Covid restrictions.

At the same time, ocean freight rates have skyrocketed this year as demand for goods picked back up after the pandemic triggered a sharp slump across sectors. Disruption from lockdowns and a shortage of workers and containers have only exacerbated matters.

According to Global Trade Review, on routes such as from Shanghai to Rotterdam “freight prices have increased by an eye-watering 570 per cent in the last 12 months. Shipping a container from the Chinese city to Genoa is up by 509 per cent for the same period.”

Cyprus – which imports up to 95 per cent of consumer goods – could not but feel the squeeze.

“Freight rates from China are sky-high, six times what they were pre-Covid, and double or triple from other routes like Europe,” said a shipping industry source.

Import cargos to the island primarily come from Greece, Italy and China.

The Cypriot businessperson, who preferred to remain anonymous, said Cyprus imports most of its grain from Ukraine and some from Serbia.

Asked why the uptick in shipping costs, the same source attributed it to growing traffic on the trans-Pacific routes – from China to ports on the west coast of the United States.

“Supply and demand… less traffic on other lanes.”

And although freights have somewhat evened out in recent weeks, advice from shipping operators suggests that they’ll be going back up again come November.

“Recalibration of shipping traffic, more expensive fuel… a lot of things are at play. I anticipate that the trend will last into the next year.”