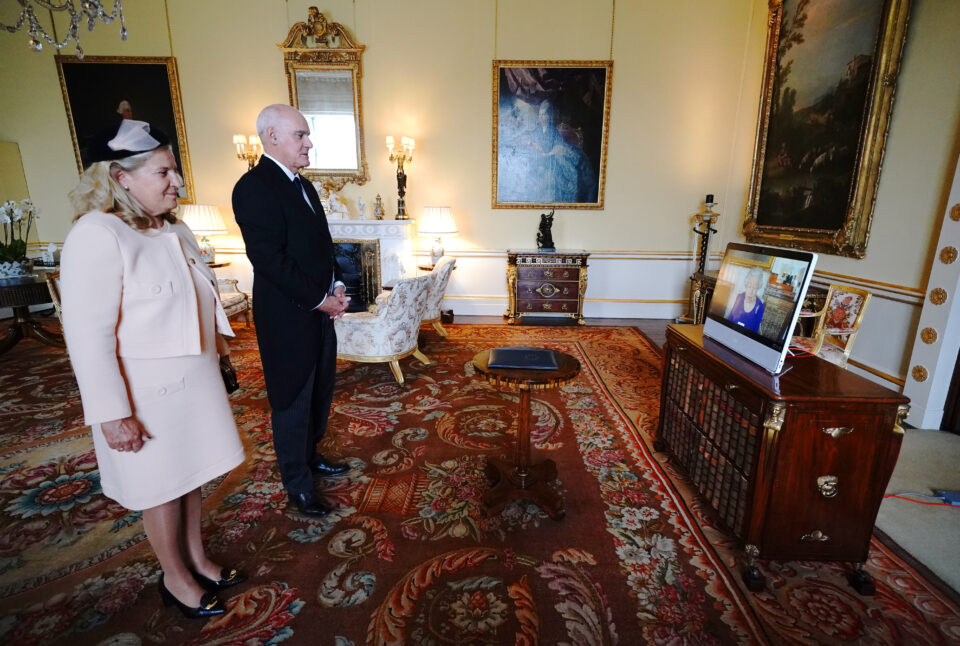 Queen Elizabeth II appears on a screen via videolink from Windsor Castle, where she is in residence, during a virtual audience to receive the Ambassador from the European Union, Joao de Almeida (centre), and Ana Jara de Carvalho (left), at Buckingham Palace, London. Picture date: Tuesday October 19, 2021.
The Queen may be 95 but she has turned down the Oldie of the Year trophy because she feels she does not meet the criteria, believing “you are only as old as you feel”.

The monarch “politely but firmly” declined the award, but sent a message with her “warmest best wishes”.

Author and broadcaster Gyles Brandreth, chairman of the awards, wrote to the Queen’s private secretary, Sir Edward Young, to ask if she would accept the main Oldie of the Year accolade.

But in a letter published in the November issue of the magazine, her assistant private secretary, Tom Laing-Baker, wrote: “Her Majesty believes you are as old as you feel, as such The Queen does not believe she meets the relevant criteria to be able to accept, and hopes you will find a more worthy recipient.”

The Queen, who is just five years away from her 100th birthday, is the nation’s longest reigning monarch and is due to celebrate her Platinum Jubilee – 70 years on the throne – next year.

She still keeps a busy diary of events and audiences and deals with her daily red boxes of official papers.

Later, she is hosting a reception at Windsor for international business and investment leaders to mark the Global Investment Summit.

Her daughter-in-law, the Duchess of Cornwall, joined Brandreth for the publication’s first in-person awards ceremony since 2019 at The Savoy hotel in London.

For the past 29 years, the Oldie of The Year Awards have celebrated the achievements of those of the older generation who have made a special contribution to public life.

Previous winners have included everyone from Oscar winners to Nobel laureates, from community care nurses to veteran athletes, from Sir John Major to Dame Olivia de Havilland and David Hockney.

Brandreth revealed that actress Dame Maureen Lipman, one of the judges, raised the prospect of the magazine honouring the Queen in recognition of her leadership during the pandemic and ahead of the Jubilee.

He described the letter he received from Balmoral Castle in response as “lovely”, writing: “Perhaps in the future we will sound out Her Majesty once more.”

The late Duke of Edinburgh was named Oldie of the Year in 2011 to mark his 90th birthday.

Philip wrote a letter of appreciation, joking: “There is nothing like it for morale to be reminded that the years are passing – ever more quickly – and that bits are beginning to drop off the ancient frame.

“But it is nice to be remembered at all.”

The Queen’s husband of 73 years died in April.

The monarch has been pictured out and about at the Royal Windsor Horse Show and Ascot in the months since, and still enjoys riding her own ponies.

Last week, she used a walking stick for what is believed to be the first time at a major public event when she attended a service marking the centenary of the Royal British Legion.

The main Oldie of the Year award went, in the end, to French-American actress and dancer Leslie Caron, who at 90 is five years younger than the Queen.

In her speech, Camilla, who is 74, joked about the downsides of ageing, saying: “I think those of us who have already passed our three score years and ten have to acknowledge that there are certain disadvantages to growing older.”

She added: “There are times, I know, when we all experience those senior moments.

“But there are advantages to growing older, too – watching one’s children growing up, enjoying one’s grandchildren – knowing that they’ll be going home after the visit, finding more time to read, finding time to read The Oldie, and coming to jolly lunches like this one.”

She echoed Richard Ingrams, The Oldie magazine’s founding editor, and said older people had to show they still had “snap in their celery” in order to win.

Brandreth said Camilla, who received the Oldie Award for Spouse of the Year in 2006, is no longer eligible herself.

He said: “The duchess is far too young. It’s not even remotely possible.

“It’s changed since we began because it’s now really people in their 80s and 90s and we’ve had centenarians, so she genuinely is too young.”

Investigations after burglars stole more than €10,000 in cash, jewellery and luxury items