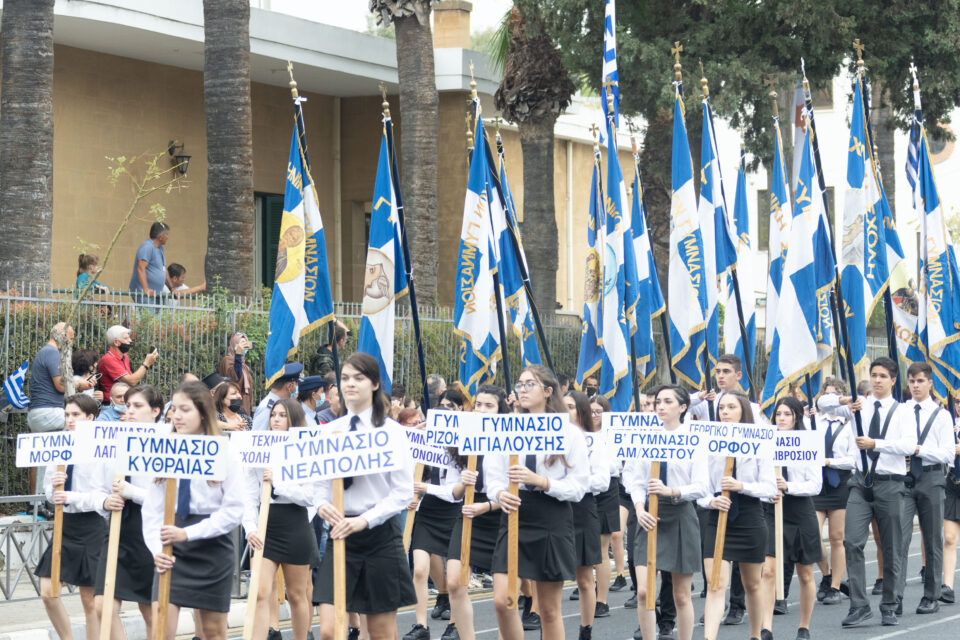 A number of church services and school parades took place on Thursday to mark Ochi (No) day, when Greek dictator Ioannis Metaxas rejected the ultimatum given by Italian dictator Benito Mussolini on October 28, 1940, demanding the Axis Powers enter Greece to take up strategic positions.

“Today we honour Greek virtues,” President Nicos Anastasiades told reporters following a church service held at the Apostolos Varnavas Cathedral on Thursday morning, “virtues that translate into love for the homeland, magnified through a unity that is our lifeblood and teaches us that ‘heroes fight like Greeks’”.

In a tweet later, he said that “this day is emblematic of all Hellenism sacrificed for freedom”.

Later, he and the Greek ambassador took the salute at the parade along Byron Avenue, in front of the Greek Embassy, in which WWII veterans, school and university students, scouts, refugee, cultural and sports associations took part, to the tunes of the National Guard and police bands.

Church services and school parades took place in all districts – in the presence of local government, state and party officials.

School parades, which did not take place last year because of Covid, were given the go-ahead this year by the health ministry, with participants and the audience needing a SafePass to attend.

“Today is the day that Greeks around the world and here in Cyprus, remember that our freedom through the centuries has only come with struggles,” Education Minister Prodromos Prodromou told reporters after the parade in Nicosia.

“Greeks fought for the great ideals of their nation and of humanity, against totalitarianism, Nazism and fascism”.

Also present at the parade, House president Annita Demetriou said that October 28, 1940, is a date that “combines a sense of national dignity, resistance to tyranny, and the need for freedom”.

Speaking after attending the parade in Paphos, government spokesman Marios Pelekanos congratulated all students who participated.

“We are honouring the Greeks’ heroic ‘no,’ a ‘no’ that changed history,” he said. “We are channelling strength from their struggle and continue decisively seeking our freedom”.