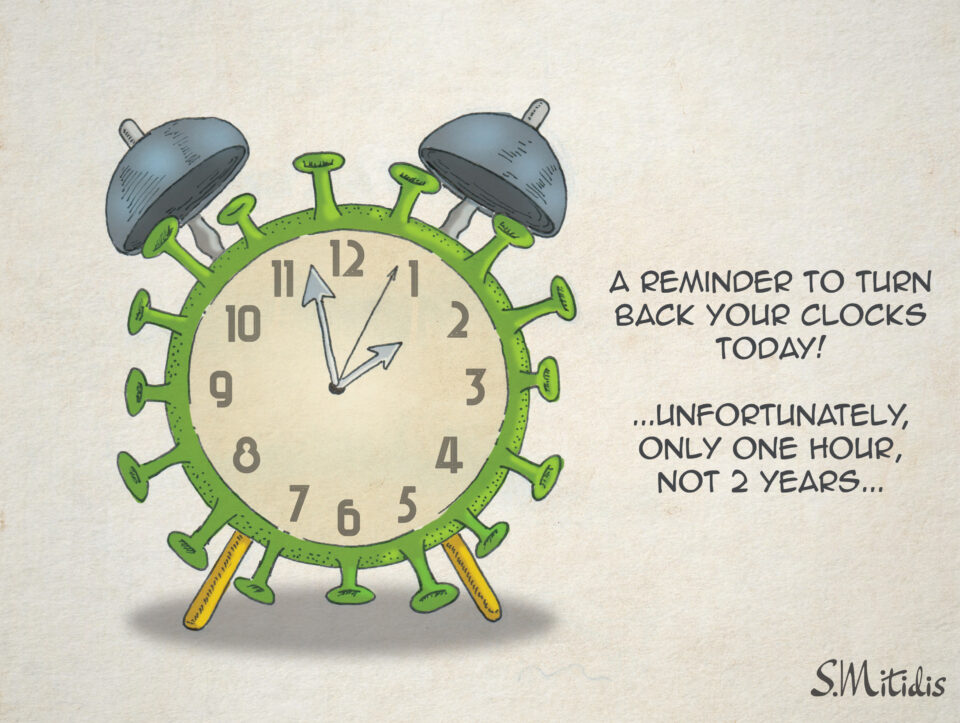 THIS WAS written before the proletarian masses were taken to the presidential palace, from all over Kyproulla in buses hired by Akel to demand the resignation of Prez Nik, for tarnishing our country’s impeccable reputation abroad, via the activities of the law firm bearing his name, with which he had cut all links, apart from holding share until 2013, in 1997.

The naming of the law office, which he has nothing to do with, in the Pandora Papers was seized by the comrades to exact revenge on Nik and Disy for what happened in 2011, after the Mari explosion, when thousands gathered outside the palace demanding the resignation of their leader, the late Comrade Tof.

It was the commies’ turn to rise against the government, their leadership and their media organs resorting to inflammatory rhetoric against Nik. A Haravghi columnist wrote on Thursday, using the slogan taken from a song title ‘Den pai allo’ (it cannot go on): “The defamation of our country, the humiliation of our state all over the world, and of us the citizens who demand from the state that represents us dignity and prestige internationally, cannot go on.”

You can’t blame the comrades for exploiting the fact that Nik’s name comes up in embarrassing revelations, and was also included in the European Parliament’s resolution, calling member-states to “proceed with investigations into all personalities mentioned in the Pandora Papers.”

The two Disy MEPs, unlike their traitor colleagues from the other parties, did their patriotic duty of voting against the resolution, which was nevertheless carried by 578 votes.

THE GOVERNMENT and Disy cannot tolerate criticism the Akel writer added, “proving they cannot put up with the idea of mobilisation of the popular masses to demand their rights.”

This is why I apologised for writing this before the revolting popular masses gathered outside the presidential palace. By the time you read this, the proletarian revolution may have already overthrown Nik and established a People’s Republic of Kyproulla that would end the defamation of our country and restore the dignity and prestige our state enjoyed during the Tof presidency.

This may seem far-fetched, but if the buses full of popular masses furious with government corruption break through the barriers at the presidential palace, anything can happen. After a couple of weeks of communist rule, we will be praying for the return of the corrupt, intolerant Nik regime the popular masses toppled, assuming prayer will be allowed.

The meeting was built up as something ground-breaking, when in fact it was nothing more than a photo-opportunity for the undercover presidential candidate that led to nothing other than Lavrov repeating the usual Russian platitudes about the Cyprob, designed, as always, not to offend Turkey.

After the meeting Lavrov said, “we confirmed the position of principle of Russia in favour of the achievement of a just, viable and comprehensive solution of the Cyprus issue, within the existing international legal framework.”

That was big news indeed, that was worth leading the CyBC news shows, as these platitudes had only been mentioned hundreds of times in the past. He also mentioned Varosha, careful not to cause offence to Ankara, saying Russia “faces the unilateral steps regarding the abandoned part of Varosha in the town of Famagusta as unacceptable and unproductive.”

Lavrov and his foreign ministry’s announcements never use the word ‘Turkey’ when uttering their principled position on the Cyprob. They talk about the ‘unilateral steps’ (by some unknown third party) and call for the ‘withdrawal of all foreign troops’ (never mentioning ‘Turkey’ or ‘occupation’). Never mentioning Turkey in its statements on the Cypob is another confirmation of the position of principle of Russia.

THE MEETING took place at the invitation of Lavrov, and the foreign ministers signed agreements on the Strategic Framework of Cooperation for 2022-24 and for Cooperation in Humanitarian Operations.

The agreements were a good reason for Christodoulides to visit Moscow, yet again. The undercover candidate boasted that this was his third visit to Moscow since becoming foreign minister, in the belief that marketing his close ties to Mother Russia would boost his election prospects.

Someone could speculate that the Russian government might be assisting his campaign and helping him raise his profile, by inviting him to Moscow three times in three years. What other explanation could there be? What use to Moscow could Christodoulides be, apart from perhaps defending Russia at the EU?

He is the foreign minister of a tiny, inconsequential country that has zero power and influence in the world. As for the three visits in the three years, they could be read in a different way – Christodoulides gets on the plane to Moscow as soon as Mother Russia calls for a meeting.

STAYING on diplomatic issues, many Cyprus-based ambassadors were laughing at the latest manifestation of the ‘Diplomat of the Year Award’, being run by our foreign ministry and the Cyprus Chamber of Commerce.

This was the third year of the award, which was given to France’s Ambassador to Cyprus, Ms Salina Grenet-Catalano. The only problem was that Ms Grenet-Catalano had only been Kyproulla for nine months, arriving at the beginning of this year, so how did she qualify as the ‘diplomat of the year.’ The award should have been renamed ‘diplomat of the semester’, quipped one of her colleagues.

In the diplomatic community, especially among European ambassadors, there is a feeling that the award is something of a joke, and many refuse to be part of it by not voting. The impression is that the award is given to the diplomat representing a country that Kyproulla wants to pander to and that the scheming Christodoulides, who came up with the idea, calls the shots.

Originally, the idea was to have ‘diplomat of the year award’, based on an ambassador’s stance on the Cyprob, but it was dropped as Russia’s ambassador, who never changes, would win it every year.

AN AWARD should also be given to Christodoulides for the way he has been pretending to work as foreign minister when in fact he has been spending most of his time campaigning for the presidency. A very senior source at the ministry recently complained that Christodoulides does not deal with any ministry business, his only concern being his public appearances.

In short, the taxpayer is funding his election campaign, which his wife, Philippa Karsera is heavily involved in, although she has a full-time job at the family business, also known as the foreign ministry. Karsera is currently Acting Secretary General for EU Affairs, a job she got by merit and not because she was wife of the minister, even though there were many higher-ranked officials eligible for the job. They were not as good

There does seem to be an element of favouritism in the treatment of Karsera with regard to postings. She has been based in Kyproulla for the last eight years, whereas the usual practice is for foreign ministry diplomats to be in the home country for a maximum of four years and then be posted abroad. This smacks of favouritism by the minister, but you can’t expect him to send his wife abroad when there is an election campaign to run. Christodoulides, to be fair, knows when the favourable treatment of his wife stops – she would never win the ‘Diplomat of the Year Award’.

Our View: Coming months will see a period of lifestyle adjustments for many