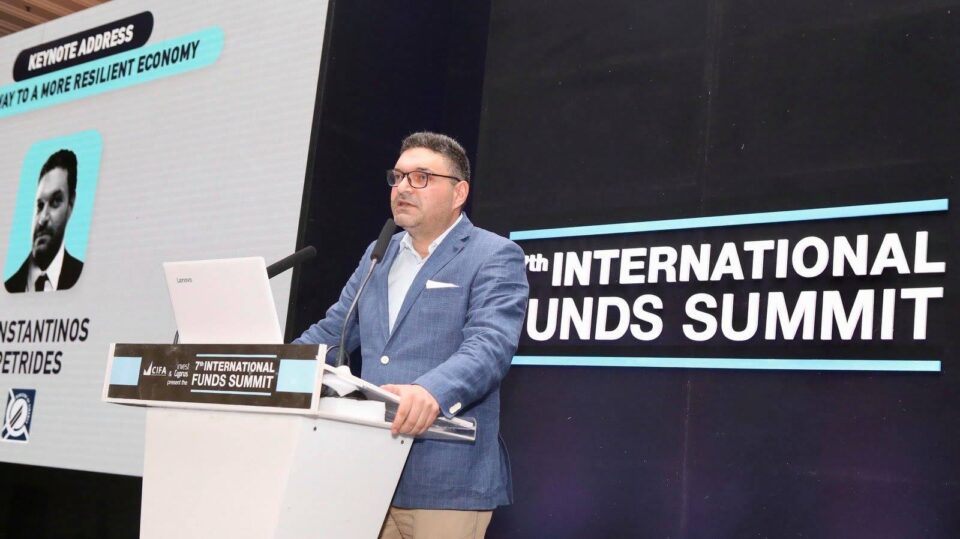 The government’s policy priorities remain the same despite the adverse effects of the coronavirus pandemic, Minister of Finance Constantinos Petrides said at the 7th International Funds Summit on Monday.

The minister explained that with the rollout of the vaccination programme and the resulting reopening of the international economy, Cyprus’ economy is now going through a ‘growth and resilience phase’.

The summit was held by the Cyprus Investment Funds Association (CIFA) and Invest Cyprus and addressed a range of topics, including Cyprus’ economic outlook, the investment vehicles and asset classes that currently leading the market, cross-border distribution, sustainable investments, as well as asset management, among others.

Petrides added that part of the plan designed to facilitate the objectives listed above is the introduction of the Business Facilitation Unit.

Scheduled for launch in early 2022, the Business Facilitation Unit will provide services for the setting up of a new company, VAT and income tax registration, and social insurance registration. The unit will also provide guidance on the permits needed to set up shop in Cyprus and expedite employment and residence permits.

Regarding the Cypriot economy, Petrides said that the government’s baseline scenario is that real GDP growth will reach 5.5 per cent in 2021, marking a recovery of ‘lost ground’.

However, the finance minister did say that the extraordinary measures implemented to support the economy had a damaging effect on public finances.

“The general government balance recorded a deficit of 5.7 per cent of GDP in 2020, following the strong performance of the last four years, while it is expected to record a deficit of around 5.0 per cent in 2021,” Petrides said.

“The budget position is expected to improve considerably from 2022 onwards, reaching a surplus by 2024,” he added.

Petrides explained that in 2021, the debt-to-GDP ratio is estimated to fall to approximately 107 per cent and stay on a downward trend over the medium term.

In terms of the tourism industry in Cyprus, Petrides said that estimates place next year’s numbers at pre-pandemic levels, indicating no lasting effects from the pandemic.

“Regarding the tourism sector which is one of the main growth drivers of the Cyprus economy, we don’t expect any scaring effects,” Petrides said.

The finance minister once again stressed the importance of fully utilising the EU’s Recovery and Resilience Facility in order to fully bolster the country’s economic prospects.

“We view the national Recovery and Resilience Plan as key for the overhaul of the Cyprus economy,” Petrides said.

“We want Cyprus to be among the pioneers in Green and Digital transition, [to be] a country with a resilient health system, a welfare state with a strong protection network for those in need,” the minister added.

Petrides also reiterated the government’s commitment to supporting the funds’ industry in Cyprus, noting that the country’s Assets under Management (AuM) have risen by more than 200 per cent between 2016 and 2020.

“It is of particular importance that 25 per cent of the funds under management in 2020, were invested in Cyprus, directly financing the economy,” Petrides said.

The minister also praised the sector’s capacity for job creation, as well as its ability to provide specialisation and value through the financial services industry.

Over 100 global leaders pledge to end deforestation by 2030