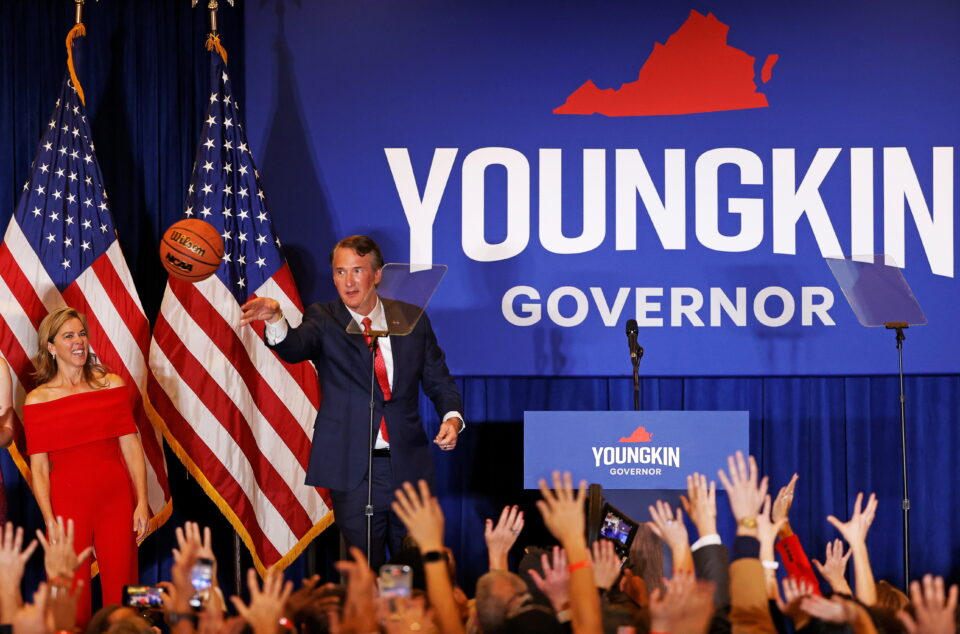 Republican Glenn Youngkin won the Virginia governor’s election and another Republican was within striking distance in New Jersey’s gubernatorial contest on Wednesday, a warning that President Joe Biden’s Democrats are in trouble heading into next year’s congressional elections.

Having never held elected office, Youngkin sold himself as a political outsider while seeking to rally suburban voters around hot-button issues like how to handle the discussion of racism in schools and COVID-19 mask mandates.

The results in two states that Biden won easily last year over Donald Trump represent a dire sign for Democrats heading into the 2022 midterms, which will decide control of the U.S. Congress – and with it, the future of Biden’s policy agenda.

Polls leading up to Election Day showed that Youngkin closed the gap with McAuliffe by appealing to independent voters – a group alienated in 2020 by Trump’s firebrand style of politics but more drawn to Youngkin’s congenial manner – despite McAuliffe’s attempts to link Youngkin to the former president.

“Comparing him to President Trump really didn’t resonate with me,” Jacob McMinn, a program manager at a defense contractor, said after casting his vote for the Republican in Fairfax, just outside Washington.

“I would like to thank my BASE for coming out in force and voting for Glenn Youngkin. Without you, he would not have been close to winning,” he said in one of three statements about the race on Tuesday.

“Together, we will change the trajectory of this commonwealth,” he said. “And friends, we are going to start that transformation on Day 1.”

The Republican candidates for lieutenant governor and state attorney general were also leading their races in Virginia, while Democrats were in a tough fight to keep control of the state House of Delegates after several Republican wins. The state Senate, which Democrats control, did not have any elections this year.

Murphy, 64, was seeking to become the first Democratic governor to win re-election in New Jersey in four decades.

He has overseen a shift to the left in the state, including new taxes on millionaires, stricter rules on gun, a higher minimum wage and paid sick leave. He has also defended his robust approach to the coronavirus pandemic, including mandating masks in schools.

Ciattarelli, 59, a former state lawmaker, focused much of his campaign on the state’s high taxes, while accusing Murphy, a wealthy former Goldman Sachs executive, of being out of touch.

A year and a half after George Floyd, a Black man, was murdered by a white policeman, Minneapolis voters rejected a ballot measure that would have replaced the police department https://www.reuters.com/world/us/minneapolis-voters-decide-scrapping-police-department-18-months-after-george-2021-10-31 with a new public safety agency.

Virginia’s race offered a preview of what may be in store in next year’s elections. The U.S. culture wars dominated the campaign, with Youngkin promising to give parents more control over how public schools handle race, gender and COVID-19 protocols, and McAuliffe vowing to protect abortion access and voting rights.

Youngkin struck a careful balance when it came to Trump, accepting the former president’s endorsement but avoiding frequent mention of him on the campaign trail. The strategy could offer a road map https://www.reuters.com/world/us/virginia-governors-race-could-show-way-republican-congressional-campaigns-2021-11-01 for Republicans trying to woo back suburban moderates in the 2022 elections.

Youngkin leaned into the Republican Party’s expressions of outrage over the discussion of systemic racism in schools. He vowed to ban the teaching of “critical race theory,” a legal framework that examines how racism shapes U.S. laws and policies, while ignoring the fact that Virginia school officials say the subject is not taught in classrooms.

Youngkin’s agenda also centered on issues that Republicans anticipate will drive voter turnout in 2022, such as public safety, election integrity and freedom from COVID-19 vaccine and mask mandates.

He drew sharp criticism from Democrats when he initially hesitated to denounce Trump’s insistence that the 2020 election was “stolen” from him, false claims that have continued to rile Trump’s supporters and led to a mob of them attacking the U.S. Capitol on Jan. 6.

Youngkin said later that Biden had won legitimately, but then called for an audit of Virginia’s voting machines, a move that prompted Democrats to accuse him of validating Trump’s election conspiracy theories.

Voters in Virginia cited the economy as their top concern, according to a CNN exit poll, ahead of education, taxes and the pandemic.