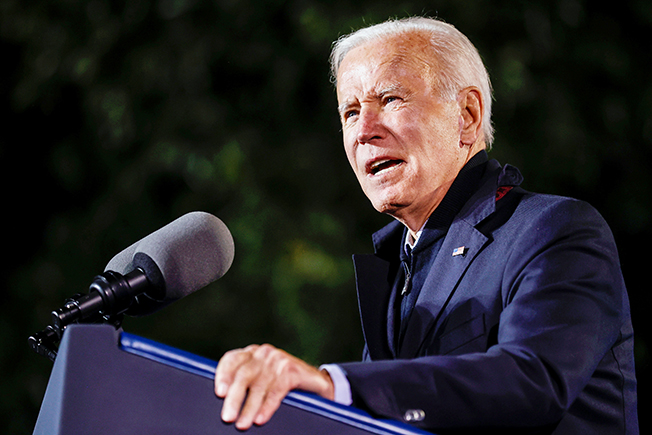 US President Joe Biden will hold a virtual meeting with Chinese leader Xi Jinping on Monday, the White House said, talks Washington hopes will create some stability amid increased tensions between the world’s two largest economies.

It is expected to be the leaders’ most extensive meeting under the Biden administration and will follow on from a telephone call between the two on Sept. 9.

Washington and Beijing have been sparring on issues from the origins of the Covid-19 pandemic to China’s expanding nuclear arsenal. US officials believe direct engagement with Xi is the best way to prevent ties spiralling toward conflict.

“The two leaders will discuss ways to responsibly manage the competition … as well as ways to work together where our interests align,” White House press secretary Jen Psaki said in a statement. “President Biden will make clear US intentions and priorities and be clear and candid about our concerns.”

Beijing is also keen to avoid confrontation as Xi faces a crucial year ahead with China’s hosting of the Winter Olympic Games and a key Communist Party Congress where he looks to secure an unprecedented third term.

China’s foreign ministry said on Saturday the leaders would exchange views on bilateral relations and issues of common interests in the summit, which will take place on Tuesday morning in Asia.

A senior US official said Biden would make clear he welcomes stiff competition with China, but doesn’t want conflict, and played down the likelihood of a long list of outcomes often tied to top-level meetings.

“This is not about seeking specific deliverables or outcomes,” the official said, adding in reference to the People’s Republic of China: “As we compete with the PRC, President Biden expects President Xi and the PRC to play by the rules of road—and he will make that point throughout the meeting.”

The meeting will come after Biden signs a $1 trillion bipartisan infrastructure deal in a big ceremony on Monday to celebrate domestic renewal plans he believes will position the United States to out-compete China.

US officials have played down the possibility of progress on trade, where China is lagging in a commitment to buy $200 billion more in U.S. goods and services.

China has nevertheless continued to push for relief from hundreds of billions of dollars of tariffs imposed under former President Donald Trump, arguing this could help both sides by easing inflation and boosting employment.

Biden and Xi outlined competing visions at meetings of the Asia-Pacific Economic Cooperation (APEC) forum this week, with Biden stressing the US commitment to a “free and open Indo-Pacific,” which Washington says faces increasing Chinese “coercion,” while Xi warned against a return to Cold War tensions.

Addressing APEC leaders on Friday, Xi spoke of the need to “stick to dialogue rather than confrontation, inclusiveness rather than exclusion, and integration rather than decoupling,” an apparent reference to US moves to make key supply chains independent of China.

Climate is a priority for Biden, and China and the United States, the world’s two biggest carbon emitters, unveiled a deal at global talks in Glasgow this week to ramp up cooperation, including by cutting methane emissions, phasing out coal consumption and protecting forests.

However, the superpowers have clashed increasingly over self-ruled Taiwan, which Beijing claims as its own and that Washington is required to provide with the means to defend itself.

Secretary of State Antony Blinken angered China this week when he said Washington and its allies would take unspecified “action” if China were to use force to alter the Taiwan status quo, further muddying the long-held US policy of “strategic ambiguity” as to whether the United States would respond militarily.

Senior Chinese diplomat Wang Yi told Blinken in a call on Saturday that the United States should not send the wrong signals to Taiwan pro-independence forces, according a statement on the Chinese foreign ministry website.

“If the United States really wants to maintain peace in the Taiwan Strait, it should clearly and resolutely oppose any Taiwan pro-independence behaviour,” Wang said.

Daniel Russel, the top US diplomat for Asia under the Obama administration, said both Biden and Xi were worried by the risk of a military incident escalating.

“Biden knows that the tools for prevention and crisis management are rusty, so we should expect him to push to put in place safeguards or ‘guardrails’ to reduce risk,” he said.

Russel said the Sept. 9 Biden-Xi call began with Xi listing complaints, but ended with a constructive agreement for officials to continue discussions.

“This suggests that the personal relationship Biden built with Xi a decade ago is still strong, and that each conversation can add some stability to the mix.”

What’s next for Britney? Clues are in her own words