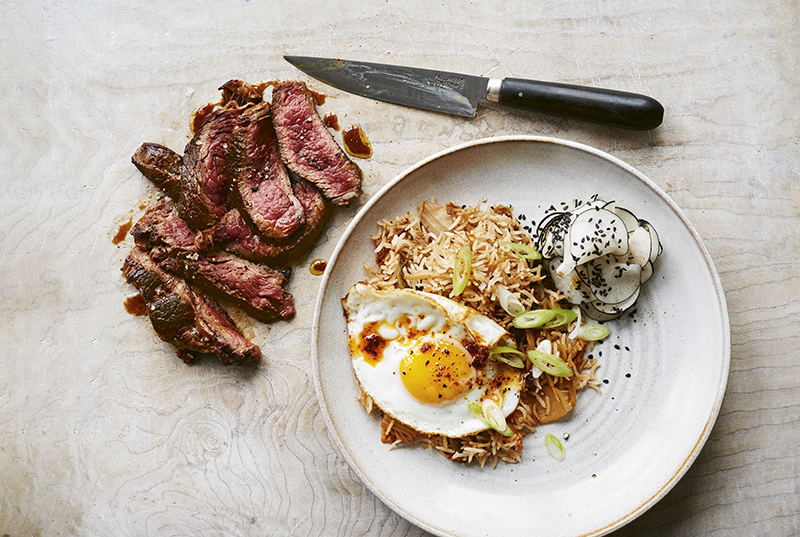 In a bizarre turn of events, Gordon Ramsay spent lockdown being yelled at, rather than doing the yelling. “I had my daughters filming, shouting, screaming and kicking my ass,” says the 54-year-old merrily over Zoom.

The Scottish-born chef, who splits his time between LA and the UK, used the pandemic-induced pause to get creative and reassess. He started cooking live at the weekends on Instagram, all the while being heckled by his kids who would fine him – in honour of the NHS – every time a dish took more than 10 minutes to throw together. And instead of winding him up, the buzz of it echoed the adrenaline he was missing and would usually access in his professional kitchens, which “I didn’t have while the restaurants were closed,” he adds.

He’s now turned those Instagram lives into a cookbook, Ramsay In 10 – a collection of swift, resourceful recipes that give an insight into how the Ramsays cook at home. “I know everyone thinks, ‘Oh it’s easy for you, 10 minutes…’” he admits, but argues it’s all in the prep. You don’t need three Michelin stars and “the most expensive Japanese knives to chop your carrot or finely dice your onion – grate the f****** thing; use a box grater and grate it! Things get done quicker.”

Ramsay just wants people cooking, and is typically no-nonsense about it, right down to a section at the front called ‘What this book expects of you’, which includes directions like ‘Read the recipe’.

Ramsay spent his 20s working 18-hour shifts with Marco Pierre White at legendary London restaurant Harveys. “The only thing we’d have on the way home in the taxi – because we could eat before we fell asleep in the back of that thing – was a Lucozade and a Mars Bar. And that was that, because the last thing you can do at that time of night, is eat,” he says, voice aglow with misspent youth.

“You don’t really eat before service,” Ramsay adds. “Any chef would be lying if they told you [they did], because you can’t fill up. You need to stay agile; you need to stay on your toes, and you need to have that hunger to constantly perfect – so we’re the world’s worst eaters.”

1tsp chopped chilli, from a jar

Place a griddle pan over a high heat.

Put the hoisin and soy sauce into a bowl and mix together. Add the steak and stir to coat.

When the griddle is smoking hot, drizzle over a little oil and cook the steaks for two to three minutes.

Meanwhile, place a large, non-stick frying pan over a medium heat and add a little oil. While the oil is heating, roughly chop the kimchi, then add it to the pan. Add the rice and stir to combine.

Slice the spring onions, reserving the green tops for serving, and add to the pan with the rice and kimchi.

Flip the steaks over and cook for a further two to three minutes.

Place a second non-stick frying pan over a medium heat and add a little oil. When hot, crack in the eggs and fry for two minutes, until the whites are firm and beginning to crisp around the edges.

Finely grate the radishes into a bowl. Season with salt, then stir in the kimchi juice.

Divide the hot rice between two bowls. Put a fried egg on top and sprinkle with the sesame seeds, followed by salt and pepper. Finely slice the steaks across the grain and place alongside the rice.

Sprinkle over the chopped chilli and reserved spring onion greens before serving with the radish salad on the side.

For the chilli chocolate dipping sauce:

Pour a 6–8cm depth of vegetable oil into a wide saucepan and place over a medium–high heat until it reaches 180C.

Put the ricotta into a food mixer or bowl and add the eggs, caster sugar, flour, baking powder and vanilla extract. Beat until everything is combined.

Now make the dipping sauce: break the chocolate into small pieces and put into a small saucepan. Add the remaining sauce ingredients, then place over a low–medium heat and allow everything to melt, stirring regularly.

When the oil is up to temperature, add half the dough balls to the pan and cook for two to three minutes, turning occasionally, until golden brown all over. Remove with a slotted spoon and drain on kitchen paper (paper towel). Cook the remaining balls in the same way.

Meanwhile, put the dusting sugar and cinnamon into a large bowl and mix together. Add the doughnuts and toss to coat.

Transfer them to a serving dish, grate over the orange zest and serve with the warm chocolate sauce.

Ramsay In 10 by Gordon Ramsay is available now