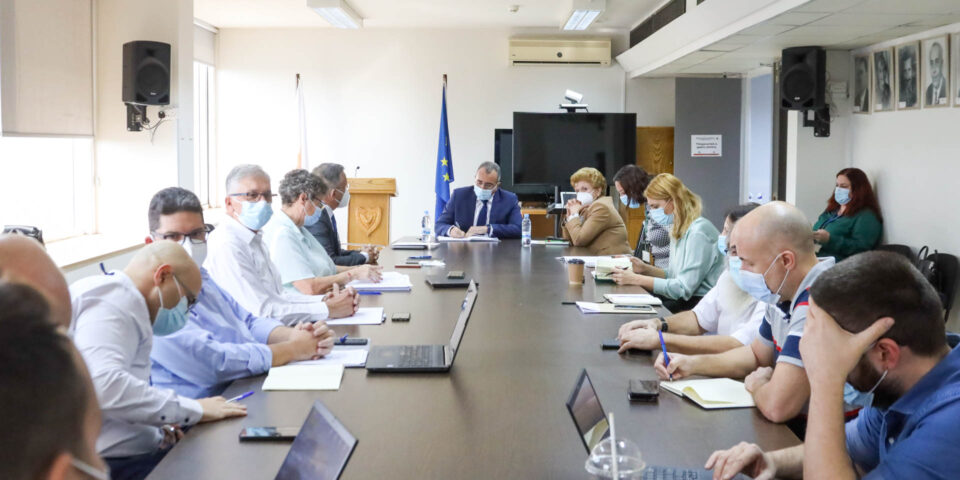 The government will not introduce additional measures to contain an uptick in coronavirus cases and hospital admissions, at least not for the time being, as it presses on with efforts to boost vaccination coverage, Health Minister Michalis Hadjipantelas said on Monday after a meeting with the team of epidemiologists.

The meeting came hours after cabinet decided to extend the booster shot to everyone over 18, once six months has passed from their vaccination, and amid reports of strained relations between the minister and the committee, members of whom were said to feel that too much emphasis has been given to booster shots. They were also understood to be unhappy about the lack of pandemic data.

Hadjipantelas and head of the team of experts Constantinos Tsioutis appeared together before the media to highlight the importance of adhering to protocols and other measures to curb the spread of coronavirus.

The minister said that members of the contact tracing team had briefed the meeting about their findings, while the health ministry’s representative on the European Medicines Agency had given updates on new medicines and treatments for Covid. The head of Okypy (state health services organisation) briefed committee members on hospital admissions.

He said he had asked the experts whether booster jabs should be made more generally available and whether additional measures were warranted.

“The majority of experts said that the roll out of the booster jab should start slowly for all, once the six months have passed. The majority also said there should be no additional measures. We will follow the situation and will meet weekly to study the data,” he said.

“We will stop the surge first of all if we do the self-evident and adhere to the protocols, if we keep a distance, wear masks, ventilate our spaces,” the minister responded when asked whether the meeting had discussed ways to curb the surge in cases.

“We will also stop it if we try to boost vaccination in the first and second dose and then the third.”

To this end, the ministry was working on a plan to visit to schools and army camps with low vaccination rates, while a mobile vaccination unit would on Saturday operate in Larnaca – the district with the lowest vaccination rate, in the hope that members of the public would come to be vaccinated.

Asked whether there was any thought of introducing stricter measures for the unvaccinated, the minister said the experts had made no such proposal.

In his statements, Tsioutis said the meeting had discussed the situation so as to stick to the one and only target, to stay safe. “For this reason, we will continue with these meetings with other colleagues in other departments so that the cooperation becomes stronger and is boosted with the analysis of data so that we are prepared,” he said.

Cyprus does not want to reach the point of other neighbouring countries, therefore there must be constant cooperation, he added.

Asked about the aim of the weekly meetings, he said it was correct analysis and preparation. “From there on there are other measures. Vaccination has an effectiveness that however is strengthened by all the rest. Test, distancing, masks,” he said.

Asked whether there were any plans to follow the example of other countries such as Austria and take specific measures regarding the unvaccinated, he said: “Every surge starts with behaviour. We must give the message that we have not finished, and we are not exiting the pandemic. Certainly, we do not want to talk about measures and separating our fellow citizens.”

Parliament to stay at Philoxenia until mid-2022