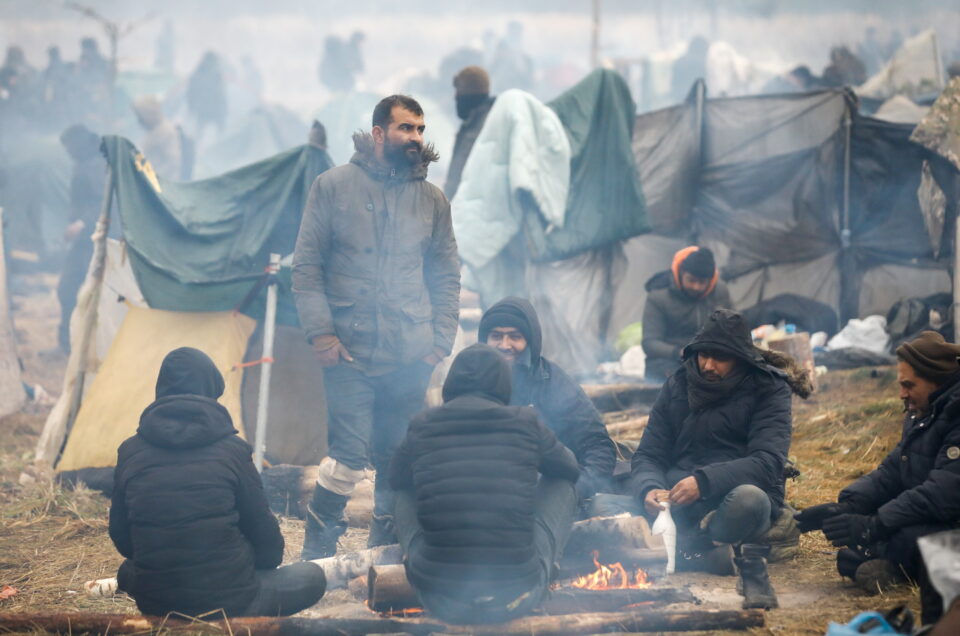 Migrants gather around a fire in a camp near Bruzgi-Kuznica checkpoint on the Belarusian-Polish border in the Grodno region, Belarus REUTERS

For months, Belarusian President Alexander Lukashenko has been accused of using illegal migrants as a tool to punish the European Union for imposing sanctions on his regime.

In July, Belarus loosened its restrictions on visas and increased flights on its state-run airline from the Middle East, allowing thousands of would-be migrants to arrive from Iraq, Syria and other countries. Belarusian security forces then funnelled the migrants to the borders with Poland, Lithuania and Latvia – all members of the European Union – and even gave them wire cutters to breach the fences.

In recent weeks, the situation has grown dire, with thousands of migrants now trapped in tents in freezing conditions and nowhere to go. At least 11 migrants have died.

Belarus has been accused by the EU of manufacturing the crisis in revenge for sanctions imposed in June. The EU has not backed down, adopting fresh sanctions on Belarus this week.

European officials have stepped up their use of war-like rhetoric, as well.

Polish Prime Minister Mateusz Morawiecki accused Lukashenko of “using civilians as weapons for a modern hybrid war”. Charles Michel, the European Council president, called the crisis a “brutal, hybrid attack on our EU borders”. And NATO has blasted the “irregular migration artificially created by Belarus as part of hybrid actions” to target the EU.

So, is the world seeing a “new type of war”, and if so, what does this mean and who stands to gain?

What is hybrid warfare and ‘lawfare’?

As I wrote in an earlier article for The Conversation with Andrew Dowse, “hybrid warfare” is an emerging concept in war and conflict studies.

It refers to the use of unconventional methods to disrupt or disable an opponent’s actions to achieve strategic objectives without engaging in open hostilities. Russia’s use of cyber attacks against the west are a good example of this.

“Grey-zone” operations are related to hybrid warfare. These are types of coercive actions that are meant to intimidate an opponent, but also fall short of physical conflict. Grey-zone operations are difficult to categorise due to the ambiguity of the actions (and who’s committing them) and the ambiguity of international law about those actions. Sometimes, the actions don’t even justify a response.

For example, Taiwan has accused China of using grey-zone tactics by repeatedly sending fighter jets near its territory to wear down its military capabilities and influence Taiwanese public opinion.

Hybrid warfare and grey-zone operations are often opportunistic and situational in response to a particular vulnerability.

There’s also a third notion that’s relevant in this context called “lawfare”, which refers to using the law itself as a weapon.

Is Belarus guilty of these things?

So, how is this all playing out on the Belarus-EU border?

In short, the crisis could be considered an act of hybrid warfare because Belarus is using migration strategically to put pressure on the EU and create discord within the bloc. This amounts to state-sponsored human trafficking aimed at creating a humanitarian crisis to force the EU and its member states to accede to Belarus’s demands, namely ending their sanctions.

Any concessions to Belarus could further embolden the rise of right-wing parties in Europe and widen existing divisions within the EU. There were already fears Poland might be heading for a “Polexit” from the bloc over migration and other issues.

Belarus is also engaging in “lawfare” by coercing EU states to break international and EU law by stopping migrants and returning them to Belarus. This is a violation of the principle of non-refoulement under international law, which prohibits the sending of refugees back to countries where they might get harmed.

Poland passed legislation last month allowing migrants who enter the country illegally to be pushed back and for their asylum claims to be ignored. This week, Polish forces have used tear gas and water cannons against migrants trying to cross the border.

What is Russia’s role in all of this?

Lukashenko seems to have borrowed from Russian President Vladimir Putin’s playbook when it comes to hybrid and grey-zone operations against the west. In fact, Russia has been accused of using illegal migration to push its political agenda before.

In late 2015 and early 2016, thousands of refugees and migrants made their way to Norway and Finland from northern Russia, with the help of Russian guides in convoys of old cars. Then, suddenly, the stream of people stopped.

European officials suspected Russia might be facilitating the migrant flows in response to EU sanctions for Moscow’s annexation of Crimea and its hybrid warfare actions in Ukraine in 2014.

Because of the ambiguous nature of hybrid warfare and grey-zone operations, it was difficult to prove Russia’s involvement or intent. But experts said Russian and Syrian forces targeted hospitals and used barrel bombs to push civilians to move.

While Russia is blaming the west for the current crisis, Poland’s prime minister says it is actually being masterminded by Putin.

What would Russia have to gain from this? Russia could be seeking to exploit the crisis as part of its “reflexive control” grey-zone approach. This refers to using a combination of military, political and economic pressures to weaken the west and cement its own role as a still-relevant global player and potential mediator.

If this is Russia’s aim, it’s cynical statecraft at its best by Putin, who will emerge as the only “winner” from this humanitarian and geopolitical crisis.

The nightmare of the annual tax return