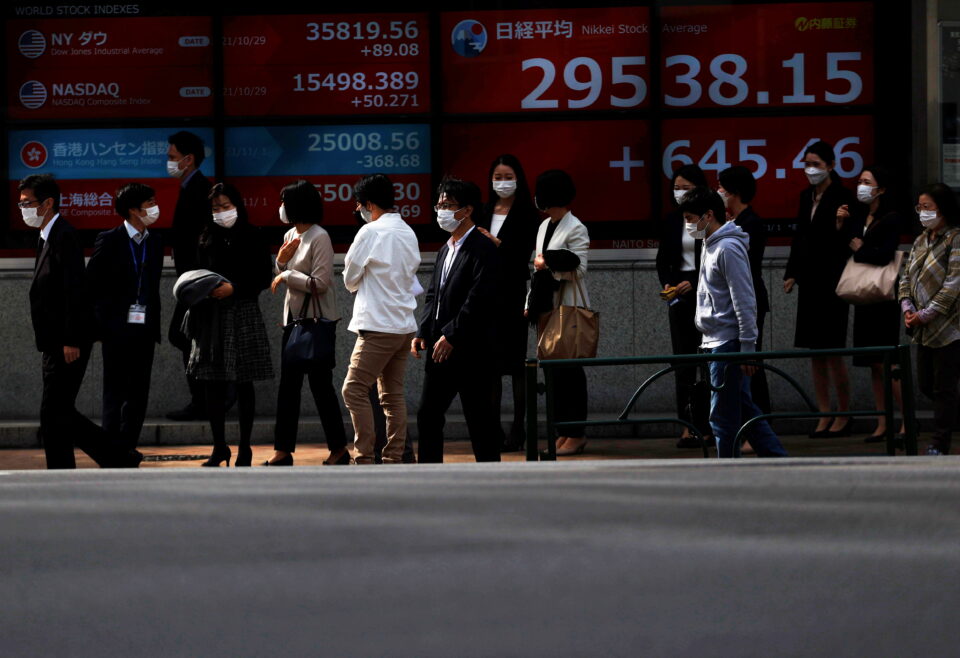 Japan, the world’s third-biggest economy, will close its borders to all foreigners, while Australia’s plans to re-open to skilled migrants were also in doubt as nations scrambled on Monday to rein in the spread of the Omicron variant of the coronavirus.

Markets regained some composure as investors await more details of the variant following a freefall last week after news of its emergence ignited fears that fresh curbs could upend a nascent economic revival from a two-year pandemic.

It could take “days to several weeks” to understand the level of severity of the variant, says the World Health Organization (WHO), which has dubbed it a “variant of concern”.

Japan will close its borders to all foreigners from Tuesday, Prime Minister Fumio Kishida said.

“We are (taking measures) with a strong sense of crisis,” he had told reporters earlier, although no Omicron infections have yet been found in Japan.

Australia is to review plans  to re-open from Dec. 1 to skilled migrants and students, Prime Minister Scott Morrison said on Monday, adding it was a “bit too early” to reinstate two-week hotel quarantine for foreign travellers.

“So we just take this one step at a time, get the best information, make calm, sensible decisions,” Morrison told broadcaster Nine News.

A national security panel will meet later in the day to assess border easing due from Wednesday, he added, while leaders of states and territories are set to meet.

Morrison called for calm as the severity, transmissibility and vaccine resistance of Omicron had not been determined, echoing remarks by the WHO.

Symptoms of Omicron are so far mild and could be treated at home, a South African doctor, one of the first to suspect a different variant, has said https://www.reuters.com/world/africa/safrican-doctor-says-patients-with-omicron-variant-have-very-mild-symptoms-2021-11-28.

Countries from Indonesia to Saudi Arabia have imposed travel curbs for visitors from southern Africa.

Singapore has deferred the start of vaccinated travel lanes with Middle Eastern countries, such as Qatar, Saudi Arabia and the United Arab Emirates, in view of their role as “transport nodes” for affected countries, its health ministry said.

The wealthy southeast Asian city-state and neighbouring Malaysia re-opened their land border, one of the world’s busiest, allowing vaccinated travellers to cross after a shutdown that lasted nearly two years.

Britain said it would call an urgent meeting of G7 health ministers on Monday.

In the most far-reaching effort against the variant, Israel is to ban the entry of foreigners and re-introduce counter-terrorism phone-tracking technology, it has said .

South Africa has denounced the measures https://www.reuters.com/world/africa/safrica-says-it-is-being-punished-early-covid-variant-detection-2021-11-27 as unfair and potentially harmful to the economy, saying it was being punished for its scientific ability to identify variants early.

“The prohibition of travel is not informed by science, nor will it be effective in preventing the spread of this variant,” President Cyril Ramaphosa said on Sunday.

“The only thing (it) … will do is to further damage the economies of the affected countries and undermine their ability to respond.”

President Joe Biden will give an update on the variant and the U.S. response on Monday, the White House said in a statement.

It will take about two weeks to get definitive information about the transmissibility and other features of Omicron, Dr. Anthony Fauci, the top U.S. infectious diseases official, has told Biden, it added.

Fauci believes existing vaccines “are likely to provide a degree of protection against severe cases of Covid”, the White House said.