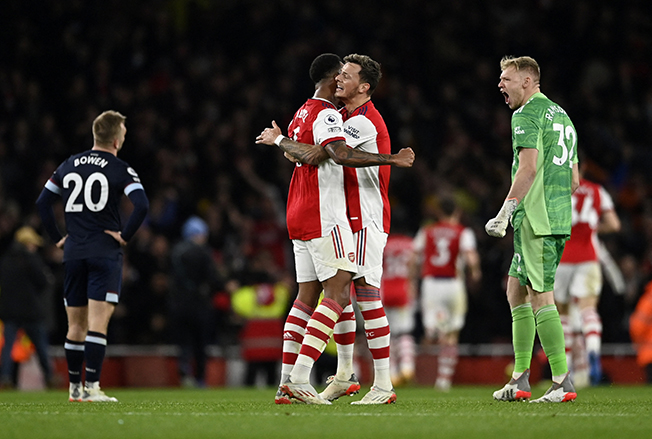 Gabriel Martinelli and Emile Smith Rowe fired Arsenal to a 2-0 victory over West Ham and into the top four of the Premier League.

Brazilian forward Martinelli, profiting from Pierre-Emerick Aubameyang’s enforced absence from the squad with a rare run in the Gunners starting line-up, tucked in his second goal of the season early in the second half.

And substitute Smith Rowe doubled the lead late on after Alexandre Lacazette had missed a penalty.

It was enough to inflict defeat on an increasingly weary-looking West Ham side, whose own charge for a Champions League spot has slowed to a crawl in recent weeks.

To add to their problems they were reduced to 10 men when Vladimir Coufal was sent off for bringing down Lacazette, who saw his subsequent penalty saved by Lukasz Fabianski.

Romain Saiss struck a superb volley in first-half stoppage time to give Wolverhampton Wanderers a 1-0 win away to Brighton & Hove Albion in the Premier League on Wednesday as the home side’s winless run extended to 11 league games.

Brighton, who had the better chances in the first half, thought they had cleared the danger from a corner just before the break, but Ruben Neves chipped a beautiful ball over the defence and Saiss was on hand to score with a deft volley.

Wolves upped the tempo after the break, hitting the woodwork twice and though Yves Bissouma missed from point-blank range, Brighton were mostly limited to unsuccessful pot-shots from distance in their desperate chase for an equaliser.

The defeat leaves Brighton, who have not won since beating Leicester City 2-1 on Sept. 19, in 13th spot on 20 points, with Wolves four points above them in eighth position.

Ayew strikes as Palace hold Saints to 2-2 draw
Crystal Palace forward Jordan Ayew scored his first goal for the club in 13 months as they secured a 2-2 home draw with Southampton in the Premier League on Wednesday.

The Ghanaian netted from close range in the 65th minute after quickfire goals from James Ward-Prowse and Armando Broja had cancelled out Wilfried Zaha’s early opener for Palace in a pulsating first half.

Zaha struck in the second minute when he cut inside and fired a low shot past two defenders inside the near post, with Palace missing several chances to double their lead before Ward-Prowse levelled with a 32nd-minute free kick.

With the home side reeling, Albania striker Broja turned the tide in the 36th minute when he took the ball in his stride and drilled a low shot from 20 metres into the bottom right corner.

Visiting goalkeeper Willy Caballero denied Odsonne Edouard with a double save in the 58th minute and also deflected away the striker’s shot seven minutes later but Ayew was perfectly placed to sweep in the rebound from a tight angle.

The result lifted Palace two places up to 11th on 20 points from 17 games while Southampton stayed 15th on 17 points, six above the bottom three although 18th-placed Burnley have two games in hand.