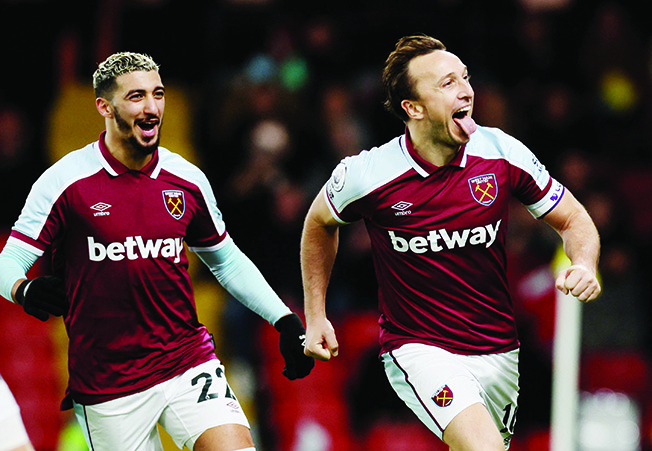 West Ham United ended a three-game winless run, romping to a 4-1 win at struggling Watford in the Premier League on Tuesday.

Emmanuel Dennis fired Watford, who had their last two games postponed, into a fourth-minute lead with a fine left-foot effort from the edge of the box but Claudio Ranieri’s side were unable to build on their advantage.

The Hammers pushed forward with intent and drew level in the 27th minute with a first-time drive from Tomas Soucek who latched on to a through ball from Jared Bowen.

Two minutes later, Said Benrahma put the visitors ahead, drilling home after Michail Antonio had cut in from the left and slipped the ball into the Algerian’s path.
David Moyes’ side thought they had a third through Bowen but VAR spotted a foul by Soucek on Dennis and the effort was over-turned.

But the Hammers did double their advantage through a Mark Noble penalty after referee Darren England went to the pitchside monitor and ruled Watford keeper Daniel Bachmann had brought down Bowen.
Substitute Nikola Vlasic completed the rout, slotting home after good work from Bowen.

Elsewhere on Tuesday, ten-man Southampton held on for a 1-1 draw against Tottenham Hotspur at St Mary’s, as Antonio Conte became the first manager to go unbeaten in his first seven league games in charge of Spurs.

James Ward-Prowse gave Saints a deserved lead midway through the first half, but the momentum swung in the visitors’ favour when Mohammed Salisu tripped Heung-min Son to concede a penalty and pick up a second yellow before the break.

Harry Kane dispatched the spot kick, and the England captain had a superbly taken second ruled out for a narrow offside in the second half as Conte’s side failed to find a way through the depleted hosts.

West Ham’s 4-1 win at Watford meant that Tottenham dropped to sixth on 30 points, one point behind the Hammers and five behind fourth-placed Arsenal, but with two games in hand over both. Southampton are 13th with 21 points.

Crystal Palace meanwhile moved up to ninth in the Premier League after Frenchman Odsonne Edouard scored one and assisted two goals in a 3-0 win over struggling Norwich City at Selhurst Park.

Palace earned a penalty in the sixth minute when Kenny McLean tripped Will Hughes in the box and, with Wilfried Zaha suspended, Edouard stepped up to the spot and steered a side-footed effort into the bottom corner.
The home side doubled the lead in the 38th minute when Edouard turned provider from the left flank, finding Jean-Philippe Mateta with a cut-back and the French forward beat goalkeeper Angus Gunn with a shot into the far corner.

Norwich barely had time to recover when constant pressure helped Palace win the ball back minutes later. Edouard danced into the box through a crowd before the ball fell to Jeffrey Schlupp, whose venomous shot from an acute angle beat Gunn.

Palace took their foot off the gas in the second half and though Norwich managed to create a few chances, Patrick Vieira’s side kept a clean sheet to move into the top half of the table with 23 points from 19 games.

Norwich remain rooted to the bottom of the standings after a fifth straight loss without scoring.

Bodies buried in garden confirmed those of Russian women