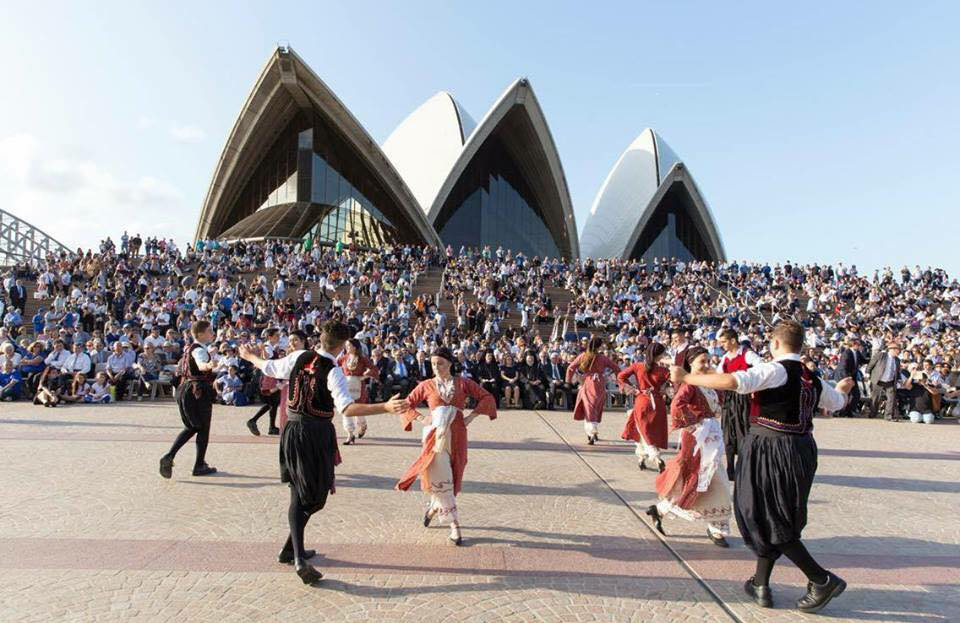 The Cypriot community of Australia

From the UK to the US and from South Africa to Australia, the Cypriot diaspora continues to thrive while remaining committed to their homeland

The Cypriot diaspora, which includes all the Cypriots permanently settled in more than 115 countries around the world, should be embraced as hidden assets for our country. Acting as ambassadors of Cyprus abroad, these expatriates have contributed to the economic and cultural life of our country for many decades, at the same time enriching the societies in which they live and work.

In the 20th century, many Cypriots left their traditional homeland for economic and political reasons, seeking to rebuild their lives in a different country for a limited period, motivated by the idea of return. Their emotional attachment to Cyprus remained steadfast, promoting their culture, language, religion, and history while working punishingly long hours, weekends, and holidays, to support their families, both in their new country and back home.

As time moved on, and as the close-knit and growing Cypriot community successfully integrated and flourished abroad, these first-generation migrants opted to stay as they became accustomed to the cosmopolitan cultural environment of their surroundings and transforming their homes as conceptual centres, intimately linked to their culture, language, religion and history.

The first wave of Cypriot migration to the United Kingdom occurred in the 1920s and 1930s, however this was small compared to the numbers that arrived after the Second World War in the late 1940s and throughout the 1950s.

“It was common for these early migrants to work in textile factories, catering and various manual labour jobs in the West End of London and Camden,” said Christos Karaolis, president of the National Federation of Cypriots in the UK.

As the representative body and acknowledged voice of Cypriots in the United Kingdom, the National Federation of Cypriots was founded shortly after the 1974 Turkish invasion to coordinate the activities of the British Cypriot community.

“Over the years, it has successfully kept the Cyprus issue at the forefront of discussions by actively engaging with the British government, developing close links with the media, ethnic minority organisations, and many other institutions,” Karaolis added.

Today, there are approximately 300,000 Cypriots living in the United Kingdom that have integrated into British society as successful business owners and professionals making a significant impact in a wide variety of different industries and fields in the United Kingdom.

The London Greek Radio and Hellenic TV have become a vital part of the fabric of the British Cypriot community, which they serve.

“Despite the rise of social media, both platforms are an essential part of the British broadcasting landscape, and are still very pervasive mediums,” said Takis Fellas, managing director and CEO, Hellenic TV. “Both the radio and television ensure that the Cypriot culture and traditions are preserved and passed down to the younger generations.”

Founded in 1975, the Pancyprian Association of America continues to focus its efforts on protecting and assisting the struggle of the Cypriot people for freedom and justice. Spearheaded by renowned entrepreneur and business leader, Philip Christopher, the association’s primary mission is to help educate Greek Cypriot American students and keep Cyprus’ heritage and traditions alive.

“The Pancyprian Association has developed excellent relations and solidarity amongst its chapters, promoting and representing the interest and coordination of social, educational, philanthropic, and cultural activities,” Philip Christopher told the Sunday Mail. “It also supports the leadership of the Greek Orthodox Church in the establishment and preservation of the Greek American identity and our faith in the United States.”

Driven by similar goals to its British and American counterparts, the Hellenic Federation of South Africa aims to support all Hellenic communities and organisations across the Rainbow Nation. In the 1970s, the Greek and Cypriot community numbered 120,000, however the rise of crime and economic hardship that followed the end of apartheid, forced almost half of the remaining Greek and Cypriot population to leave the country.

“Despite the declining numbers, Cypriots remain a significant part of the South African community, contributing graciously to the economic and social development of the country,” said John Spyridis, president of the Hellenic Federation of South Africa.  “Most second and third generation Cypriots have graduated from universities and hold key positions across a wide range of in-demand industries.”

According to Evie Eleftheriadis, deputy president of the Hellenic Federation of South Africa, the Cyprus Brotherhood of South Africa, which was established in 1934, was founded by Costas Phitides, a native of Paphos. “Its objectives were to promote and preserve the Cypriot cultural heritage through various community events, and to provide support to the growing Cypriot community of South Africa.”

With a presence in all state capitals, Cypriot Australians are the second largest Cypriot community outside Cyprus. Active, successful, and vibrant, the Cyprus Community of New South Wales (NSW) continues to contribute to the commercial, political, and cultural fabric of Australia. “The future of the Cypriot Australian community is now more certain than ever,” said Spiro Constantinou, President of the Cyprus Community of NSW.

Last year, the Cyprus Community of NSW announced the expansion of its current site that “will transform the organisation into one of the leading societies in Australia and abroad.” According to Constantinou, the future Cypriot community village will focus on passive income rather than club trade, almost certainly full proofing the community’s future.

Over the last two decades, many second and third generation diaspora members have relocated to Cyprus, fulfilling their ancestors’ dreams of returning home. Although the younger generations may not be entirely familiar with the institutions or social norms in modern-day Cyprus, moving to a foreign landscape and integrating within Cyprus’ society is often met with joy, and a nostalgic sense of home.

Those who have stayed abroad usually remain in close contact with their family in Cyprus, often visiting to acquire a sense of self. Either way one looks at it, these ambassadors (including many more organisations, communities, clubs, and societies that have not been mentioned in this article), should be embraced as hidden assets, not only for their cultural, political, and social contribution; their investments in Cyprus over the years have marked an increase in the wealth of certain sectors of the island, and can be traced directly to their hard-earned funds while living abroad.