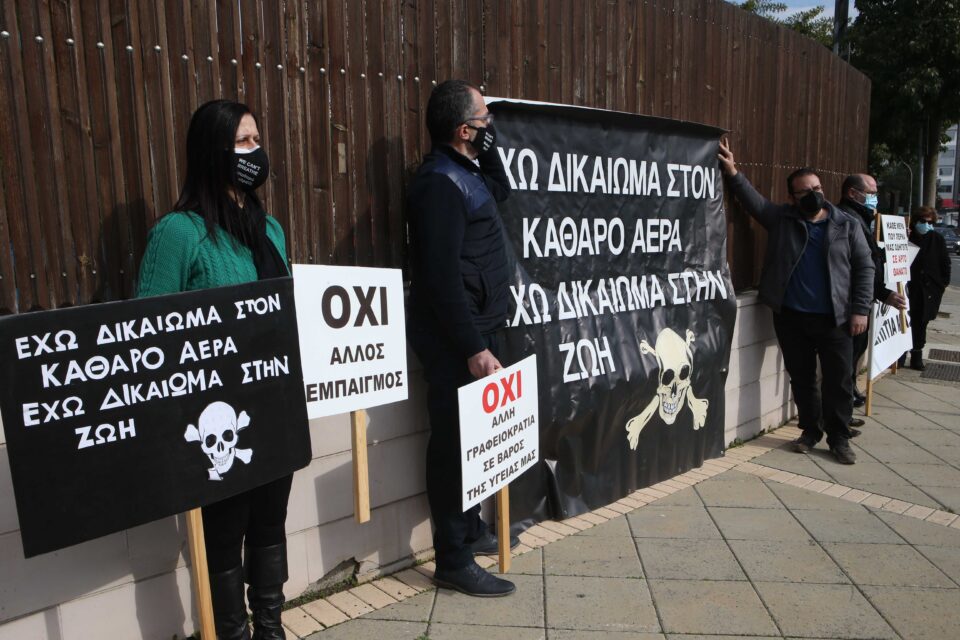 Nine communities around Vasiliko area on Tuesday warned they would take dynamic measures, including protests and road closures, if a cabinet decision to relocate the two Dali asphalt plants to their area is implemented.

Last week, residents in the Dali area who want the plants moved from their region, staged a protest outside the presidential palace.

Following a presidency statement earlier this week saying the relocation, approved July 2020, will be completed within the next three months, the coordinating committee of nine communities in Vasiliko area held a meeting on Monday.

During the meeting, participants condemned the move of any industrial development that will burden the area with another source of pollution.

In a written statement, the communities expressed “strong dissatisfaction” over the government’s “arbitrary” decision to move the plants before the completion of the environmental impact study.

Residents of the nine communities of Pentakomo, Asgata, Mari, Zygi, Kalavasos, Tochni, Chirokitia, Psevmatismenos and Maroni have also requested the state completes a study looking into the cumulative effect of the heavy industry units operating in the area.

The area is already hosting fuel terminals, the island’s largest power station, a cement factory, and will also have the energy hub. A waste management plant is also located in the wider area.

The coordination committee also referred to “a premeditated decision with the ultimate aim of satisfying a large section of voters and industrialists without taking into account the nine communities of the Vasilikos area”.

It added residents are prepared to hold protests that would cut off the Nicosia-Limassol motorway and the energy hub as well as to take legal action, not excluding an appeal to the European Court of Justice.

Their announcement came a day after the human rights committee said is working to draw up a law proposal that will cover the protection of the environment and by extension the health of residents in areas with industrial activity.

To date, the right to clean air and environment is not included in the constitution or in the European legislation, human rights committee said on Monday, forcing those affected by pollution to invoke the right to life, decent living, or the protection of property to build a court case.

In Cyprus, it is estimated that 600 to 800 premature deaths occur due to poor air quality, the chairwoman of the committee and Akel MP Irene Charalambidou said citing figures from the European environment agency.

Checks that are carried out are insufficient, she added, while there is an issue with the monitoring and measurements of pollution from industrial plants and there are no mapped areas with increased cases of cancer or other diseases.

Consumption of electricity from RES increased but percentage still low