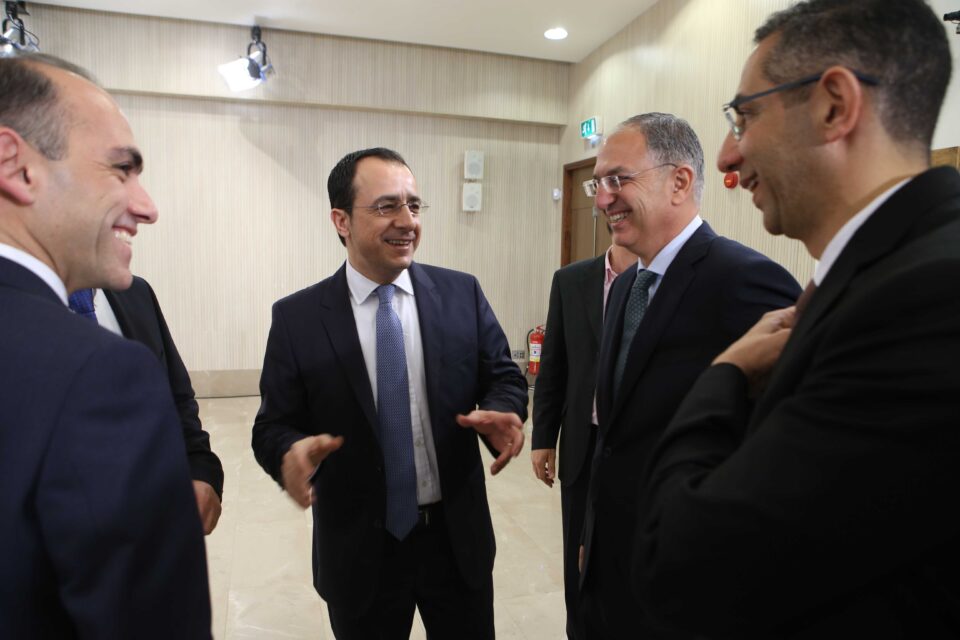 Nikos Christodoulides after being appointed foreign minister in March 2018

The former foreign minister’s hardline policies on Cyprus issue were a failure. He should not stand for president

In the summer of 1962, I had the great pleasure of being one of the members of the chorus in Sophocles’ Oedipus Rex. It was a historic performance that was staged in the ancient theatre of Salamis, directed by Panayiotis Serghis, our late teacher at the Greek Gymnasium of Famagusta.

The ancient theatre had been uncovered a little earlier in 1959, and our performance was the first staged in that sacred place since Roman times, when successive earthquakes in the 4th century AD ruined the theatre.

From that historical performance I remember very vividly the verse “audacity gives birth to tyrants”, as rendered in Modern Greek by Photis Politis, a great literary scholar. The other prophetic verses which stick in my mind are the very last verses of this great play. After 1974, every time I recall them, I find it completely impossible to hold back a tear.

“Thus, until we see the end of a mortal’s life,

we should not be envious of anyone,

prior to reaching, without sorrows and pains,

the very last hour of his life”.

What I find truly surprising is that one of the protagonists of the Cypriot tragedy is warming up to claim a place in the race for the position of the president of the Republic. I am referring to Nikos Christodoulides, who throughout his professional career systematically claimed and secured a protagonistic role in the management of the Cyprus problem and with his misguided choices has contributed to Cyprus’ current heart-wrenching plight. Instead of withdrawing from political life, apologising to the people for what has been inflicted on the country, it is extensively rumoured that he intends to aggressively seek office as president, thus satisfying his personal ambitions. This is how the verse of the ancient tragedian sprang to my mind and has been used as the title of today’s article. Regrettably, Nikos Christodoulides was one of the many “career diplomats” serving at the foreign ministry, who saw perpetuating the Cyprus problem as the road to secure their professional advancement.

The climax of his career was reached at the stage when Ioannis Kasoulides resigned his position as foreign minister because of his reservations over the hardline approach promoted at the time which led to the collapse of the talks at Crans-Montana. The slogan “zero troops, zero guarantees, here and now” was heard in July 2017 at Crans-Montana from Greece’s then foreign minister Nikos Kotzias, supported by no other than Nikos Christodoulides. Christodoulides then assumed the position of foreign minister on March 1, 2018, having served as government spokesman from April 14, 2014 to February 28, 2018.

The policies which he formulated and followed, and his handling of the situation truly constitute a fiasco. This conclusion emerges effortlessly from the miserable situation in which our country finds itself today. That efforts to solve the Cyprus problem are at an all-time low is a fact, which is acknowledged by Christodoulides himself as well as by Andreas Mavroyiannis, the Greek Cypriot negotiator throughout this crucial period.

The hardline policies Christodoulides followed towards Turkey and the Turkish Cypriots were based on the belief that only by causing pain could they be forced to adopt reconciliatory positions that would lead to a solution of the Cyprus problem. The principal levers for exercising the pressure that would yield the desired result were the following:

It is so readily apparent that the policies employed by the Cypriot foreign minister blatantly failed to meet their goals that the rendering of evidence in support of this conclusion is truly redundant. It is a classic case of “no witnesses required to prove the case”.

Nikos Christodoulides has not publicly disclosed his intention to stand as a presidential candidate. I beg him to reconsider his intentions for the good of the country. The future of Cyprus’ long history is under immediate threat and the survival of the island, as we know it, is dependent on the decisions which will be taken by Greek Cypriots over the next 12 months.