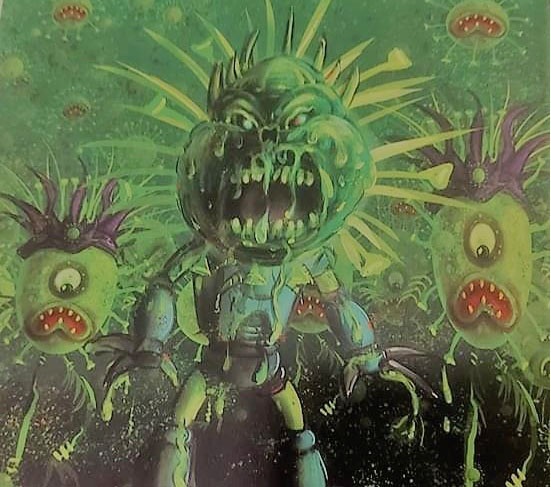 One of the photos in the book

The children’s rights commissioner has responded to parents’ complaints over the education ministry’s rollout of a book criticised for causing “terror”, minimising the mental health impact of lockdowns and offering unscientific advice.

Depicted as an invasive extra-terrestrial species devised by villains bent on destroying earth, Covid-19 is anthropomorphised with claws and toxic-green laden fangs.

The book – titled “No! You won’t get in our nose!” – was released by Evgenios Trivizas, seen as the Roald Dahl of Greece and Cyprus, and rolled out to young children in first second and third grade this week.

In the book, which bears the education ministry’s logo on the front, Covid-19 attempts to trick children into playing outdoors so it can use them as a vector to infect and kill their grandparents.

“Children! Come out and play, run carefree in the squares, playgrounds, on the sunny beaches, in sweet shops and luna parks.

“And at night, as soon as you return home, hug your grandmother and grandfather as tight as you can; kiss them and worry not!” the virus calls out to the children, hunkered indoors.

Some parents have taken exception to author’s portrayal of many outdoor activities – such as playing on the beach – as being depicted as intrinsically dangerous.

“For many parents, taking our kids outdoors was one of the only ways of dealing with the pandemic,” one parent told the Cyprus Mail.

“As if they were all sitting quietly at home and reading like the book shows, many children were just on their smartphones all day, it was very damaging for their mental health,” they said.

Illustrations from the book have circulated across social media and drawn strong criticism, but some parents are concerned that attention on the pictures may draw away from the more harmful aspect of the book.

One mother commented that lockdowns disproportionately impacted women, who often still take the leading role in caring for children; and were having to balance working from home at the same time.

“Also, the depiction of happy smiling teachers on the computer screen during distance learning is laughable, the teachers on screens looked confused,” a parent told us.

“From what we [parents] saw, it was glitchy, there was chaos and teenagers especially were unengaged,” she said.

Another told us that key messages and core advice from the book – that outdoors is equated with killing people – is seriously damaging for children’s mental health.

Parents have now called on the ministry to explain the decision-making process behind issuing the book to the children in the first three years of primary school.

They said that instead of educating children about coronavirus, it is designed to frighten them into being scared for their older relatives because Covid lurks in their noses and steals their breath.

They have also complained to the children’s rights commissioner’s office.

Commissioner Despina Michaelidou told Phileleftheros on Friday that a request has been sent to the ministry for details on the case and the criteria by which the decision was taken.

However, she said that she is not qualified to judge whether the book is appropriate or not but she did say parents had every right to confiscate it from their children if they didn’t want them to see it as it was not compulsory reading via the curriculum. The books was given free of charge to the ministry.