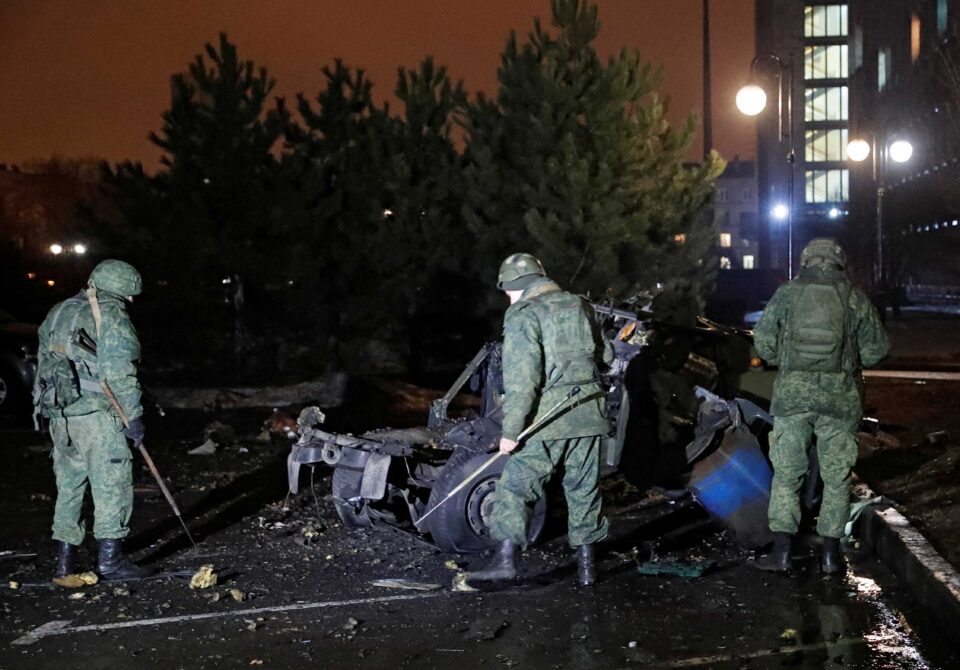 Specialists inspect a wreckage of a car that, according to the local authorities, was blown up near the government building, in the rebel-controlled city of Donetsk, Ukraine

Russian-backed separatists packed civilians onto buses out of breakaway regions in eastern Ukraine on Friday, a shock turn in a conflict the West believes Moscow plans to use as justification for all-out invasion of its neighbour.

Warning sirens blared in Donetsk after it and the other self-proclaimed region, Luhansk, announced an evacuation to Russia, with women, children and the elderly going first.

Hours later, a Russian UAZ jeep exploded outside the rebel government building in the city of Donetsk, capital of the region by the same name. Reuters journalists saw the vehicle surrounded by shrapnel, a wheel tossed away by the blast.

Most of the several million civilians in the two rebel-held areas of eastern Ukraine are Russian speakers, with many already granted citizenship by Moscow.

Within hours of the surprise announcement, families assembled at an evacuation point in Donetsk to board buses for Russia. One weeping woman embraced her teenage children.

Irina Lysanova, 22, just back from a trip to Russia, said she was packing to return with her pensioner mother: “Mama is a panicker,” she said. “Dad is sending us away.”

Her father, Konstantin, 62, was not going.

“This is my motherland and the land is ours. I will stay and put out the fires,” he said.

The evacuation came after the simmering eastern Ukraine conflict zone saw what some sources described as the most intense artillery bombardment for years on Friday.

Western countries have said they think the shelling, which began on Thursday and intensified in its second day, is part of a pretext created by Russian President Vladimir Putin’s government to justify an invasion of Ukraine.

‘MOST SIGNIFICANT MOBILISATION SINCE WW2’

With global markets anxious and Europe engulfed in a diplomatic crisis, Russia said this week it had started withdrawing troops from the border near Ukraine.

Western countries fear a conflict on a scale unseen in Europe at least since the Yugoslav and Chechen wars of the 1990s, which killed hundreds of thousands of people and sent millions to flight.

Ukraine is the second biggest country in Europe by area after Russia, and home to 40 million people.

“This is the most significant military mobilisation in Europe since the Second World War,” U.S. ambassador Michael Carpenter told a meeting at the Vienna-based Organization for Security and Cooperation in Europe.

Ukraine said Russia was planning staged attacks, including a faked video of a raid on a chemical plant, and falsely accusing it of provocations in the separatist areas.

“Ukrainian forces are not planning any offensive operations, and will not use weapons if this might threaten peaceful civilians,” the Ukrainian military said.

U.S. Secretary of State Antony Blinken told the Munich Security Conference that rather than a Russian pullback, “on the contrary, we see additional forces going to the border including leading edge forces that would be part of any aggression.”

‘SHOOTING EVERYONE AND EVERYTHING’

A diplomatic source with years of direct experience of the conflict described Friday’s shelling in east Ukraine as the most intense since major combat there ended with a 2015 ceasefire.

“They are shooting – everyone and everything,” said the source.

The evacuation piled further pressure on Russia’s rouble currency and other assets, with investors unnerved by the prospect of war.

The West has threatened tighter economic sanctions on Russia if it invades Ukraine. Putin, whose nation has already been under sanctions since 2014, told a news conference in Moscow that Western countries would probably find a reason to impose more whatever Russia does anyway.

Russia is making a set of security demands, including a promise to bar Ukraine from ever joining the U.S.-European military alliance NATO, which the West says is any country’s sovereign right. On Thursday, Russia sent a strongly-worded letter to Washington threatening unspecified “military-technical measures”.

As Russia shows off its military capacity on several fronts, Putin was to personally supervise exercises of its strategic nuclear missile forces on Saturday, though it said these drills were no cause for alarm.

The Kremlin also has tens of thousands of troops staging exercises in Belarus, north of Ukraine. The drills are due to end on Sunday and Moscow has said the troops would go back to Russia at some point after.

The Russian-backed leader of Belarus, Alexander Lukashenko, met Putin on Friday, suggesting beforehand that the soldiers may remain. “The armed forces will stay as long as needed,” he was quoted as saying by the state BelTa news agency.

Putin ordered his emergencies minister to the Rostov region near the Ukrainian border to begin housing evacuees from the separatist regions.