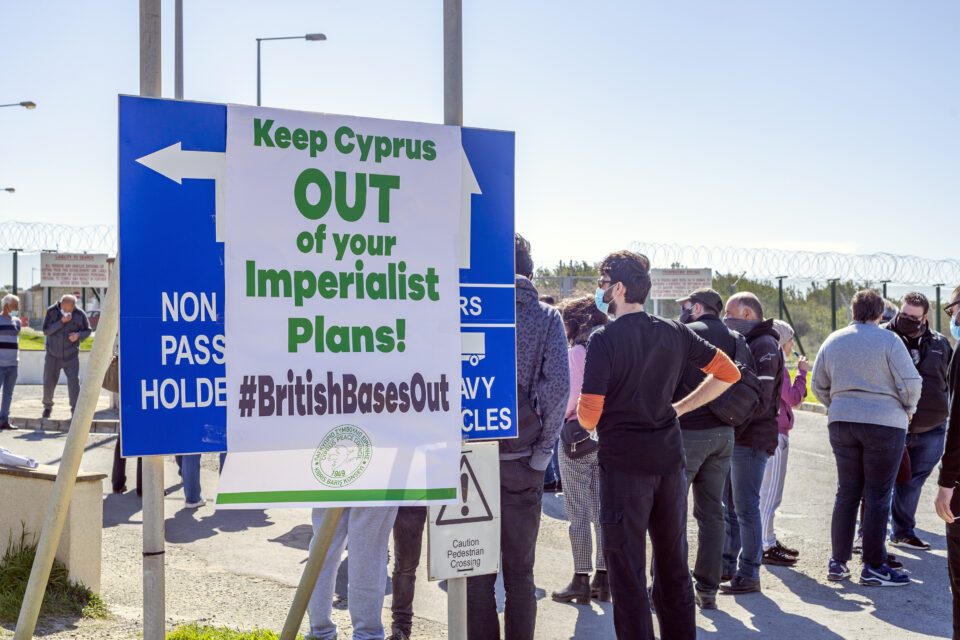 Opposition to the British Bases being involved in the crisis in Ukraine was expressed by demonstrators on Sunday who held a protest at the entrance to the Akrotiri base.

They were protesting after it was announced earlier this week that four Typhoon jets of the RAF were now at the base.

President of the Cyprus Police Council, which organised the protest, Tasos Kosteas condemned “the participation of the British Bases in preparations for war in our wider area”.

Cyprus, he said, is a living example of why foreign bases do not solve problems nor do they provide security, but encourage conflicts to become more permanent and military.

The crisis in Russia-Ukraine relations is in itself a constant source of danger, Kosteas said, adding that the presence of so many troops from foreign countries is an extremely dangerous development.

Never before, he said, has a catastrophic war in the heart of Europe been so likely, stressing that “the tension has been transferred to Cyprus with the recent parking in Akrotiri, of four Eurofighter Typhoon warplanes”.

We believe the presence of the English Bases, he said, has never offered stability and has never been favourable for Cyprus and “their participation in any war in the region exposes us to serious dangers and undermines cooperation with neighbouring countries”.

The Cyprus Peace Council condemns the involvement of the British Bases in war moves and calls for the removal of these aircraft.

“The deployment is part of ongoing support for wider NATO defensive efforts to patrol the skies above Eastern Europe during this time of heightened tension on the Ukrainian border,” a statement issued by the Bases said.

The protesters handed a memorandum to a representative of the Bases, demanding “the immediate disbandment of British bases as well as all foreign military bases in the countries of our region and in the world.”

The British Bases, it added, are a remnant of the colonial regime, constantly endangering the peoples of the region and violating international law.

“The people of our region have a common enemy in imperialism, which breeds wars, chauvinism and militarism,” the resolution said.

Demonstration against gender discrimination in army held at Palace